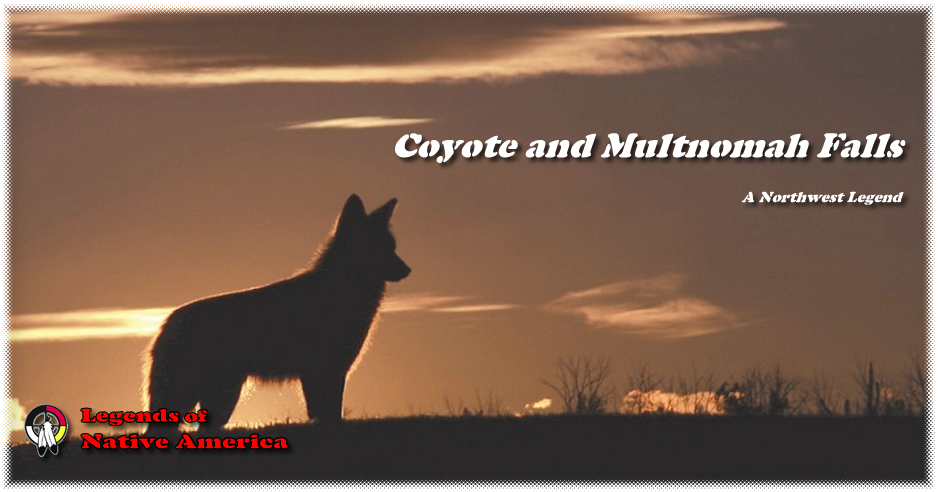 The Big River, or Great River, in the stories of the Northwest Indians is the Columbia. The Big Shining Mountains are the Rockies.

"Long, long ago, when the world was young and people had not come out yet," said an elderly Indian years ago, "the animals and the birds were the people of this country. They talked to each other just as we do. And they married, too."

Coyote (ki-o-ti) was the most powerful of the animal people, for he had been given special power by the Spirit Chief. For one thing, he changed the course of Big River, leaving Dry Falls behind. In some stories, he was an animal; in others he was a man, sometimes a handsome young man.

In that long ago time before this time, when all the people and all the animals spoke the same language, Coyote made one of his frequent trips along Great River. He stopped when he came to the place where the water flowed under the Great Bridge that joined the mountains on one side of the river with the mountains on the other side. There he changed himself into a handsome young hunter.

When travelling up the river the last time, he had seen a beautiful girl in a village not far from the bridge. He made up his mind that he would ask the girl's father if he might have her for his wife. The girl's father was a chief. When the handsome young man went to the chief's lodge, he carried with him a choice gift for the father in return for his daughter.

The gift was a pile of the hides and furs of many animals, as many skins as Coyote could carry. He made the gift large and handsome because he had learned that the man who would become the husband of the girl would one day become the chief of the tribe.

The chief knew nothing about the young man except that he seemed to be a great hunter. The gift was pleasing in the father's eyes, but he wanted his daughter to be pleased.

"She is my only daughter," the chief said to the young hunter. "And she is very dear to my heart. I shall not be like other fathers and trade her for a pile of furs. You will have to win the heart of my daughter, for I want her to be happy."

So Coyote came to the chiefs lodge every day, bringing with him some small gift that he thought would please the girl. But he never seemed to bring the right thing. She would shyly accept his gift and the run away to the place where the women sat in the sun doing their work with deerskins or to the place where the children were playing games.

Every day Coyote became more eager to win the beautiful girl. He thought and thought about what gifts to take to her. "Perhaps the prettiest flower hidden in the forest," he said to himself one day, "will be the gift that will make her want to marry me."

He went to the forest beside Great River and searched for one whole day. Then he took to the chief's lodge the most beautiful flower he had found. He asked to see the chief.

"I have looked all day for this flower for your daughter," said Coyote to the chief. "If this does not touch her heart, what will? What gift can I bring that will win her heart?"

The chief was the wisest of all the chiefs of a great tribe. He answered, "Why don't you ask my daughter? Ask her, today, what gift will make her heart the happiest of all hearts."

As the two finished talking, they saw the girl come out of the forest. Again Coyote was pleased and excited by her beauty and her youth. He stepped up to her and asked, "Oh, beautiful one, what does your heart want most of all? I will get for you anything that you name. This flower that I found for you in a hidden spot in the woods is my pledge."

Surprised, or seeming to be surprised, the girl looked at the young hunter and at the rare white flower he was offering her.

"I want a pool," she answered shyly. "A pool where I may bathe every day hidden from all eyes that might see."

Then, without accepting the flower that Coyote had searched for so many hours, she ran away. As before, she hurried to play with her young friends.

Coyote turned to her father. "It is well. In seven suns I will come for you and your daughter. I will take you to the pool she asked for. The pool will be for her alone."

For seven suns Coyote worked to build the pool that would win the heart of the girl he wished to marry. First he cut a great gash in the hills on the south side of Great River. Then he lined that gash with trees and shrubs and ferns to the very top of a high wall that looked toward the river.

Then he went to the bottom of the rock wall and slanted it back a long way, far enough to hollow out a wide pool. He climbed up the wall again and went far back into the hills. There he made a stream come out of the earth, and he sent it down the big gash he had made, to fall over the slanting rock wall. From the edge of that wall the water dropped with spray and mist. And so the water made, at the bottom, a big screen that hid the pool from all eyes.

When he had finished his work, Coyote went to the village to invite the chief and his daughter to see what he had made. When they had admired the new waterfall, he showed them the pool that lay behind it and the spray. He watched the eyes of the girl.

The grandmother on the south side of the river also could be heard as far west as the big water and as far south as anyone lived. The two old women saw everything that was done, and every day they told all the people on both sides of the river.

Now they saw the chief's daughter go every morning to bathe in the pool, and they saw Coyote wait for her outside the screen of waterfall and spray. The old grandmothers heard the two sing to each other and laugh together. The grandmothers laughed at the pair, raised their voices, and told all the people what they saw and heard.

She was no longer happy. She no longer sang with joy. One day she asked Coyote to allow her to go alone to the pool. The old grandmothers watched her go behind the waterfall. Then they saw her walk from the pool and go down into Great River. Her people never saw her again.

Coyote, in a swift canoe, went down Great River in search of her. He saw her floating and swimming ahead of him, and he paddled as fast as he could. He reached her just before she was carried out into the big water where the sun hides at night.

There the two of them, Coyote and the girl, were turned into little ducks, little summer ducks, floating on the water.

That was a long, long time ago. But even today, when the sun takes its last look at the high cliff south of Great River, two summer ducks swim out to look back at the series of waterfalls that dash down the high mountain. They look longest at the lowest cascade and the spray that hides the tree-fringed pool behind them.

If those who want to understand will be silent and listen, they will hear the little song that the chief's daughter and Coyote used to sing to each other every morning after she had bathed in the pool. The song begins very soft and low, lifts sharply to a high note, and then fades gently away.