Legend of the She-Wolf of Tsla-a-wat 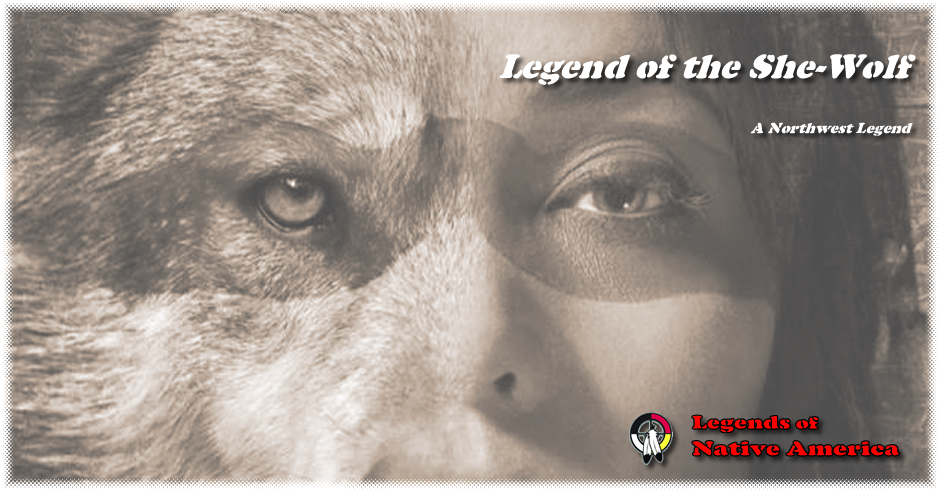 Long, long ago, an Indian band belonging to the Wolf clan lived on the shores of Tsla-a-wat, an inlet close by Vancouver. Now the inlet is called Indian Arm.

This band was very proud of its family crest of a Wolf. It was carved on the house posts and it decorated many of the wooden dishes, tools and other things used by the people.

The story of the Wolf was a favourite one among the Tsla-a-wat children. Grandparents never got tired of telling how the village of Tum-ta-mayh-tun was once deserted and left to ruins and when, many years later, it was again filled with happy people. And all because of an inquisitive Mother Wolf.

The children were told that a terrible sickness came to the village in that long ago time. Everyone died — all except one tiny baby boy. He was too young even to have a name, so we will call him .No-name.. There was no one left to care for him and he would have died too if a she-wolf had not come by and, seeing on people about, started sniffing around the village. She wondered where everybody was. It was so quiet. No sounds of children playing or men busy at their work. There was only the calling of gulls and the grating .Krrkk, Krrkk. of two ravens wheeling high in the sky. The tide was far out, but no one dug clams on the beach. No smoke curled from the blackened smoke holes on any of the buildings.

The she-wolf nosed around till she was satisfied that no harm threatened her. Then she trotted into the house where .No-name. was sleeping. She padded about, sniffing at the dried meat and fish hanging from the roof beams. She spent some time gnawing a deer bone which was lying in the cold ashes of a fireplace. Then, licking her lips, she wandered up to the baby‘s cradle and peered in.

The she-wolf gave a little whine of surprise when she saw the by, whose black hair was sticking up in wisps around his head. When No-name woke up and began to whimper, she was reminded of her four cubs she had left in their den on the hillside.

She gazed with steady yellow eyes at the tiny face, so hairless, which grew all puckered up as the shim-per turned into a frightened wail. As she gazed, she sniffed. This must be a man-cub, she decided, recognizing the same scent she caught from hunters in the forest. But where was his mother? The she-wolf hesitated. Surely this small thing must be cared for, and just as surely there was no one here to care for him. Quickly she made up her mind. She took the baby up in her powerful jaws and started for home.

On her way through the fir forest the she-wolf had to put the child down several times and have a rest. She carried him gently, but it was hard to hold his squirming little naked body. As for No-name being carried in a wolf‘s mouth was a very strange and scary experience. He was used to being carried on his mother‘s back. Also, he missed his warm cedar bark blanket and his diaper of soft moss.

The wolf cubs were whining with hunger when their mother arrived at the den. She lay down and stretched out her long shaggy body so that the little ones could suck her milk. She knew that the man-cub must be hungry too, and cold, so she put out a paw and drew him close to her soft warm belly where he sucked greedily along with the cubs.

Babies‘ memories are short. The little orphan quickly forgot his wooden cradle. He even stopped wondering where his mother was. Cuddling up to his woolly foster brothers and sisters, he soon felt as if the den had always been his home and the wolves his family.

After a while No-name and the cubs ate food which the mother and father wolf had chewed up to make soft. When some teeth had grown they learned to eat mice and little rabbits. Then came the time for hunting lessons. Of course, No-name could never hope to kill the animals the cubs were being taught to stalk, but he shared in the lessons and did the best her could.

The child grew big and strong on the raw red meat of deer and elk. Having never tasted the food that humans eat, he did not miss it. Nor did he miss the joy of playing, for wolf cubs enjoy games of tag, hide-and-go-seek, and wrestling as much as any boy. The she-wolf and her mate treated No-name as their own and were very proud of the son who walked on two legs and had no fur on his body.

One day, when No-name was a teenager, he went exploring by himself. After wandering for some time in the forest, he came to the village where he had been born. In amazement he stared at the great empty houses, now falling into ruin. Surely these were dens. But who had lived in them? Certainly not wolves. Inquisitively, No-name examined stone tools and weatherworn wooden dishes half-hidden in the long grass. What could these strange things be? While still puzzling, No-name noticed a bow and arrow. They were lying in the shelter of a big rock which had saved them from spoiling during the many years of sun and rain.

No-name picked up the bow and arrow. After fiddling with them for a few minutes he saw how they could be used. Before long he sent an arrow flying straight and true to hit the tree he aimed at. No-name could hardly wait to get home and show his exciting find to the family. Next day, when hunting with his foster brothers, he killed a deer with his arrow. The wolves were astonished and prouder of him than ever.

Although happy enough, No-name did sometimes wish he could find someone like himself. He realized that he would some day be man — perhaps he had some faint remembrance of his father. But where did his own people live? The wish to find them grew stronger and stronger. At last, No-name decided that her must go away and search for men. He sat beside his foster mother and stroked her soft grey fur, trying to make her understand what he had to do. He promised that she would be remembered forever among his people, if he could find them.

So No-name set out on a long journey which took him far across the mountains to the rolling plains. One day he stopped at the top of a low hill and looked down onto a large group of strange cone shaped objects. Soon people appeared and No-name realized that the objects were dens lived in by humans like himself. He ran as fast as he could down the hillside towards the tipis, for that is what the cone shaped objects were.

The Plains people welcomed the young stranger, offered him a home, and promised to show him the ways of men. Before long No-name married a pretty young girl from the tribe. When he told her about the beautiful country he had come from. With its great forests and mountains and the bountiful sea, she agreed to return there with him. After many weeks of travel, they arrived at the shores of Tsla-a-wat.

They young husband and wife had lots of children and their children had more children and so on down the years until once again the village was filled with busy, happy people. No-name kept his promise to his foster mother by making a wolf the proud crest of the clan that she founded.

The children of the Wolf clan loved this story about their ancestor. They never shivered at the thought of wolves as some children do. In their hearts they loved them because if it had not been for that she-wolf, no one would be sitting in a Tsla-a-wat lodge listening to the tales of long ago.