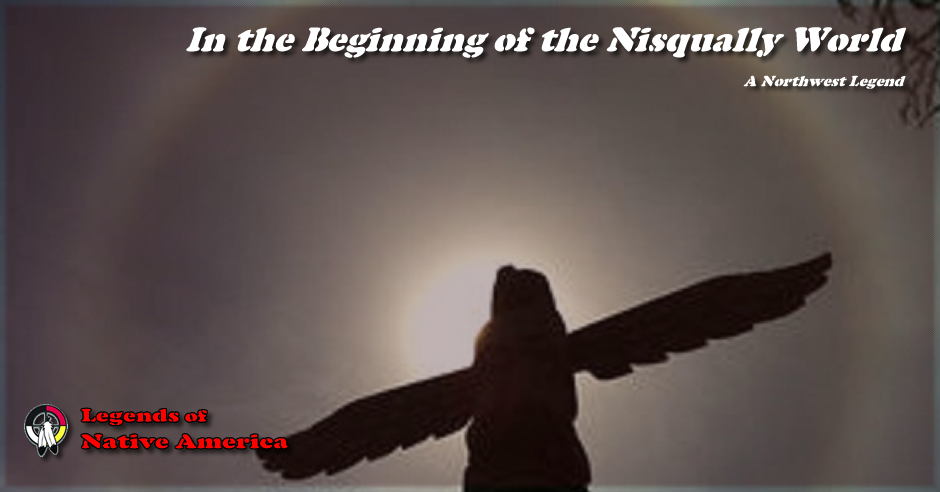 Long, long ago, some of the Puget Sound Indians used to say, people on the earth became so numerouse that they ate all the fish and game. Then they began to eat each other. Soon they became worse than the wild animals had been. They became so very wicked that Dokibatl, the Changer, sent a flood upon the earth. All living things were destroyed except one woman and one dog. They fled to the top of Tacobud and stayed there until the flood left the earth.

From the woman and the dog were born the next race of people. They walked on four legs and lived in holes in the ground. They ate fern roots and camas bulbs, which they dug with their fingers because they had no tools. Having no fire and no clothing, they suffered from both the heat and the cold.

Their troubles were made worse when a giant bear came up from the south. The bear was huge and strong and also had special powers. With his eyes he cast a spell upon whatever creature he wanted to eat. Then that creature was unable to move, and the bear ate him. The people had no weapons. So the bear was about to eat all of them.

At last the Changer sent a Spirit Man over the mountains from the east. His face was like the sun. His voice was like the voice of Thunderbird. He came armed with bow, arrows, and spear. And he had great powers.

"Why do you weep?" he asked the people.

"We weep because of the bear,' they answered. "The beast is about to destroy us. None of us can escape from him."

The Spirit Man did not promise to help them, but he did show them how to walk on two feet. And he told them that there were two powerful spirits. "One of them is good; the other is evil. The Good Spirit sent me to you."

Then he returned to the mountains to talk with the Good Spirit, the Changer. When the Spirit Man came to the people a second time, he brought many strange gifts and stayed for many moons.

First he called all the people together for a big potlatch, the first potlatch of all the Indians. He told them that a potlatch is a big feast and gift-giving celebration. To the young men, the Spirit Man gave bows, arrows, and spears, and he taught all the young men how to use them.. To the old men, he gave canoes. He showed them how to make canoes from cedar trees, how to make fishing spears and nets, and how to fish from the canoes.

The Spirit Man taught the girls how to make skirts from the inner bark of the cedar tree, how to paint their faces and oil their hair so they were more beautiful, and how to sing. He showed the older women how to dig camas roots with the sticks he brought them, and how to make baskets out of cedar bark and seaweed. He showed them how to make fire by rubbing two sticks together, how to cook, how to carry burdens by strapping them across the head. "You will serve man and be useful to him in these ways," the Spirit Man told the women. "He will be your master."

Then the Spirit Man filled himself with strong powers, for his next task was to kill the giant bear. First he put seven arrows into his bag. He called together the men of the tribe, and for one whole sun the group chanted over the arrows to make them strong with spirit power.

Then the Spirit Man took one arrow and pushed it into the ground in the center of the plain west of Tacobud. After walking half a day toward the lodge of the great bear, he pushed a second arrow into the ground. He walked for another half day toward the bear's den and pushed a third arrow into the ground. Thus he kept on until he had placed six arrows erect and in a straight line. With the seventh arrow in his hand, the Spirit Man went up to the bear. The beast tried to cast a spell from his eyes, but the Spirit Man's spirit powers were so strong that the bear could have no effect on him. He shot the seventh arrow into the beast and then ran back to the sixth arrow. The bear followed him. He shot the sixth arrow and then ran back to the fifth. The bear followed him.

They kept running until they reached the first arrow. The Spirit Man shot the first arrow into the heart of the beast adn killed him. There the great bear died, in the middle of the Nisqually plain.

All the people were glad when they gathered together near the dead beast that had frightened them for so long. They removed the skin and divided it equally among the different branches of the tribe. The bear was so huge that the skin of one ear covered the whole of Mound Prairie.

The last thing the Spirit Man did for the people on this journey to their land was to make a large building with just one opening. In this big house he placed all the diseases and evil deeds known to the world since then. Then he called a certain family to him and made them guardians of the building. What was in the house he told only to the head of the family.

"You and your children and grandchildren will take care of this house forever," the Spirit Man said. "Remember that the door must never be opened. And remember that only the head man of the family is ever to know what is in the building."

After many years, the only members of the family left were an old man and his wife and daughter. One day, when her father and mother went away from the house, the daughter saw her chance to peek into the Spirit Man's house. She had long wanted to see what was behind that door.

So she undid the fastenings and pushed back the door a little distance. Out rushed all the creatures of the house--all the diseases and evil deeds that have been in the world ever since.

The Changer was so angry with the daughter that he created the demon Seatco. Seatco's home is among the rocks in the distant mountains. He sleeps by day. At night he flies over the earth to seize any woman found away from her home..