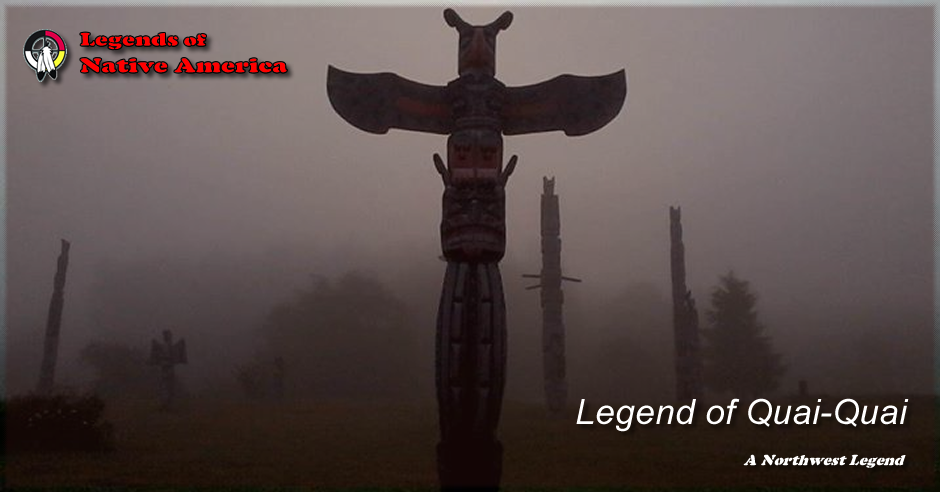 Quai-Quai was born to parents of the Stanley Park tribe and while still very young his parents were killed by some means that was never really clear to the people where he lived and from then on he and his older sister were treated with some suspicion to a point where they feared for their own safety. Knowing that in the main and powerful tribe of Belcarra were close relatives, the girl and her little brother walked from their birthplace to the strange and beautiful country to the east.

Walking the shoreline in those early days was no small task, but by making use of the low tide they were able to avoid going into the woods, except where game trails followed close to the water. At the clam beaches of what is now Barnet they met some of the people of Belcarra who gladly took them back with them. Upon their arrival at the Camp they were given into the custody of their relations who fed them and listened to the reason for the visit. After the little girl had told all she knew and of their fear for their safety, they were told that they would never go back to their old tribe again, and from now on they could call this tribe home as long as they had need. And with that the two very, very tired little people curled up on a bed of spruce tips and went sound asleep.

In the days that followed a great peace filled the hearts of the two orphaned children and the little girl took Quai-Quai to the quiet waters of Bedwell Bay to teach him to swim. In an amazingly short time he was a very skillful swimmer for his feeling for water was uncanny and at the age of ten he could out-swim the strongest swimmers of the tribe. Then one day when he was 17 a great seal of tremendous size came up in front of the camp and Quai-Quai swam out to it as though he knew it was coming. He climbed-up on its back as it turned and it swam away with him. In a moment they were lost in the mists of the Inlet, heading for the narrows and the Great Gulf that leads to the sea.

A full year passed, and as his sister stood at the water‘s edge sadly pondering the fate of her beloved brother, a tiny wave splashed on the stones at her feet. She looked up and there to her surprise and delight was the great seal and her brother almost to the shore! She was overjoyed at his return and the tribe gathered round to hear his story.

He told them first that his name would now be Squia-Aqua, which means =Mask‘ for which he offered no explanation. He also told of his wonderful voyage with the great seal and how they had travelled all over the vast sea to the west and had seen many countries and all manner of wonderful things.

And so after a great feast had been held in his honour, the old Chief of the tribe held council with his wise men. It was decided to make Squia-Aqua the new Chief — a decision which proved to be very sound for the people of Belcarra lived in peace and health for many generations under his wise council. In such esteem was he held by all the lesser tribes of the Inlet that he became a kind of Great Chief to all the tribes within Burrard Inlet and Indian Arm to Buntzen. It was a sad day when he finally passed away, and in his honour a beautiful and moving .Dance of the Mask. was created, depicting the life and death of this great leader.

After the plague that almost wiped out the tribe at Belcarra, the body of another famous descendent Waut-Sauk, a Chief of more recent times, was moved to the Burrard Reserve cemetery on the North Shore of the inlet and as the canoe slipped away from the shore two Blackfish took-up guard on either side and escorted him to his final place of rest, only turning back to sea as the canoe nosed up on the beach. Even today when blackfish are seen in the Inlet, the small band of descendents, who now live on the north shore of Burrard Inlet, wonder who they have come to follow, silent guards for someone — into the land of .Forever..