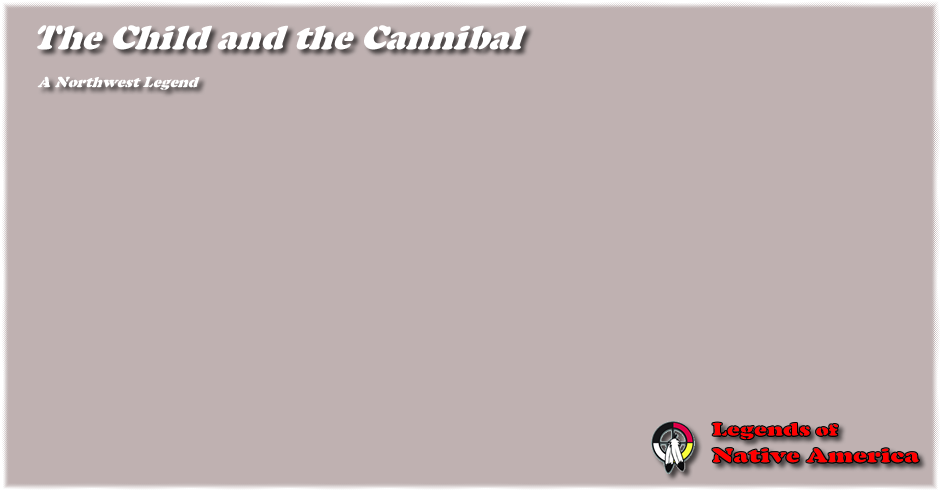 Once upon a time there was a youth whose name was Anutkoats, who was playing with a number of girls behind the village. While they were playing, a noise like the cracking of twigs was heard in the woods. The noise came nearer and nearer. The youth hid behind a tree, and saw that a Snanaik was approaching. She was chewing gum, which caused the noise. He advised the children to run away, but they did not obey. When they saw the gum, they stepped up to the Snanaik and asked her to give them some.

The Snanaik gave a piece of gum to all the children, and when she saw Anutkoats, who was advising the children to return home, she took him and threw him into the basket which she was carrying. Then she took all the other children and threw them on top of him into her basket. After she had done so, she turned homeward. Then Anutkoats whispered to the girls to take off their cedar-bark blankets, and to escape through a hole that he was going to cut in the basket. He took his knife, cut a hole in the bottom of the basket, and fell down. The girls also fell down one by one until only one of them was left.

All the children returned home and told their parents what had happened. The mother of the girl who had not been able to escape began to cry, mourning for her daughter. She cried for four days and four nights. Then her nose began to swell, because she had been rubbing it all the time. She had thrown the mucus of her nose on the ground. Now when she looked down, she saw that something was moving at the place where it had fallen.

She watched it from the corners of her eyes, and soon she discovered that her mucus was assuming the shape of a little child. The next time she looked, the child had grown to the size of a new-born baby. Then the woman took it up, and the child began to cry. She carried it into the house, and washed the baby for four days. Then the child, who was very pretty and had red hair, began to speak, and said, "My father, the Sun, sent me to ask you to stop crying. I shall go out into the woods, but pray don't cry, for I am sent to recover your daughter. I know where she is. Make a small salmon-spear for me, which I shall need." Thus spoke the boy.

Then the woman asked an old man to make a salmon-spear, which she gave to her son. His mother gave him ear-rings made of abalone shells, and the boy played about with his spear, and always wore his ear ornaments.

One day when his mother was crying again, the boy said, "Mother, I ask you once more, don't cry, for my father the Sun sent me down to bring back your daughter. He will show me where she is. I shall start today to recover my sister from the Snanaik, who stole her. Don't worry about me."

Then the boy went up the river. After he had gone some distance, he came to a tree which overhung the river. He climbed it, and looked down in order to see if there were any fish in the water. Soon he heard a noise some distance up the stream, and gradually it sounded nearer. Then he saw the Snanaik coming down the river. When she reached the tree, she stopped and looked down into the clear water. She saw the image of the boy, who was sitting on the tree, and thought it was her own reflection.

She said, "How pretty I am!" and she brushed her hair back out of her face. When she did so, the boy imitated her movements in order to make her believe that she was looking at her own reflection. When she laughed, he laughed also, in order to deceive her. But at last the Snanaik looked upward, and saw the boy sitting in the tree. Then she addressed him with kindly words, and asked him to come down. She said, "What did your mother do in order to make you so pretty?"

The boy replied, "You cannot endure the treatment I had to undergo in order to become as pretty as I am."

The Snanaik begged, "Oh, come down and tell me. I am willing to stand even the greatest pain in order to become as pretty as you are. What are you doing up there?" Then the boy said, "I was watching for salmon, which I desire to harpoon with my salmon-spear."

The Snanaik repeated, "Oh, come down, and do with me whatever you please in order to make me as pretty as you are."

The boy replied, "I don't believe you can endure the wounds that I have to inflict upon you."

She replied, "You may cut me as much as you please. I want to become as pretty as you are."

Then the boy climbed down the tree, and the Snanaik asked, "What must we do first?" He said, "We must go up this river to find two stone knives with which my mother used to cut off my head."

They walked up the river, and found the stone knives. Then the boy said to the Snanaik, "Now lie down on this stone. Put your neck on this knife."

The Snanaik did as she was bidden. Then the boy took the other knife, told the Snanaik to shut her eyes, and cut off her head. The head jumped back to the body, and was about to unite with it, when the boy passed his hands over the wound, and thus prevented the severed head from joining the body again. Thus he had killed her. Then he went to the Snanaik's house. He found his sister whom the Snanaik had killed and smoked over her fire. He took the body down, and patted it all over with his hands. Thus he resuscitated the girl.

On looking around in the house, he found the dried bodies of other children, whom he also brought back to life. Then he took the girl and the other children home.