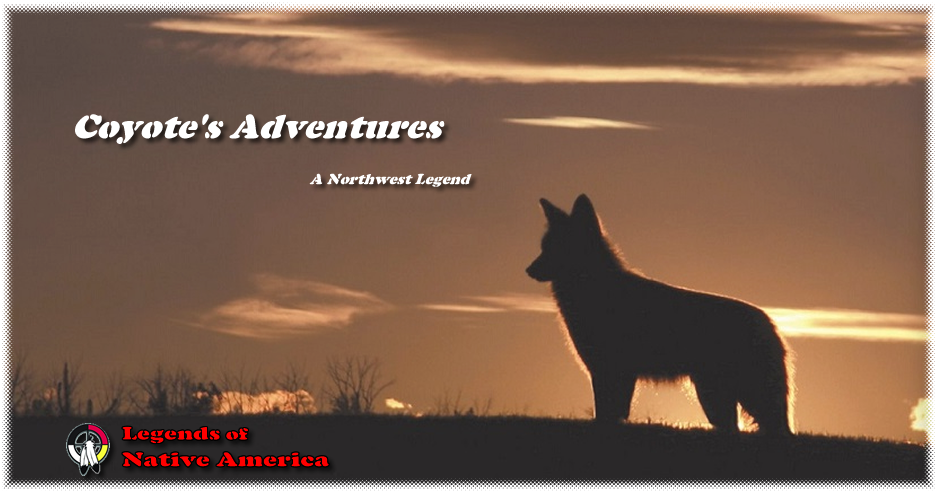 Near Spokane one day, Coyote and Fox were travelling together on their way north. When they reached a river, Coyote said to Fox, "I believe I'll get married. I'd like to take one of those Pend d'Oreille women for my wife."

So they decided to go in search of the Chief of the Pend d'Oreilles. They soon located him with his tribe, and Coyote approached him with a gift of salmon.

"Chief, I would very much like to have one of your tribal women for my wife. Can we talk about which one you would choose for me?"

"Now Coyote, you know we do not approve that our women intermarry with other tribal members. So you cannot have one of our Pend d'Oreille women for your wife."

Coyote and Fox left the Chief. Coyote became so disappointed with the Chief's decision, he began to rage to his partner, Fox.

"Soon the Chief will be sorry for his refusal. I'll make a big waterfall here in his big river. Forevermore, salmon will not be able to get over the falls to feed the Pend d'Oreilles."

Since Coyote had the power for his wishes to be granted, the great falls immediately formed as he had proclaimed. That is how the Spokane Falls began.

From there, Coyote walked north to Ravalli. Soon he met an Old Indian Woman camped close by. Old Woman said to Coyote, "Where are you going?"

"I am on my way to travel all over the world."

"Well, you had better go back and not stay here," Old Woman said to Coyote.

"Why should I turn back and not stay here for a while? I am looking for a wife."

"Because there is a Giant here who kills everyone passing through this valley," replied Old Woman.

"But I am strong, I will fight him and kill him instead."

So Coyote did not heed Old Woman's warning and started walking on the trail again. He noticed a large tamarack tree nearby on a hillside.

"I'll put an end to the Giant with a hard blow from this tree. That's the way I'll kill him," Coyote said to himself. So he pulled the tamarack tree from the ground and swung it onto his shoulder and continued his search for the Giant.

Soon Coyote saw a woman who seemed nearly dead. He asked, "What is the matter, are you sick?"

"I am going to kill the Giant with this tamarack tree," said Coyote.

"You might as well throw the tree away. Don't you know the Giant already sees you and you are already a tasty bite in the Giant's belly?" said the woman.

Coyote took her advice and threw the tamarack tree up on a hillside where it is still growing near Arlee, a little station on the Northern Pacific Railroad. All of what was Jocko Valley now fills the Giant's belly.

As Coyote travelled on from there, he observed many people lying here and there. Some were already dead, others seemed about to die, or were nearly dead.

"Tell me what is the trouble with all of you people," asked Coyote of an Old Woman with her eyes open.

"We are all starving to death," she answered.

"How can that be, when I can see plenty to eat here, lots of meat and fat?" said Coyote.

Then Coyote attacked the Giant and cut away large chunks of grease and fat from the sides of the Giant and fed all of the people. Soon all became well again.

"All of you people prepare to run for your lives. I am going to cut out the Giant's heart. When I start cutting, you must all run to O'Keef's Canyon or to Ravalli," called out Coyote.

With his stone knife, Coyote cut out the Giant's heart. The Giant called out, "Please, Coyote, let me alone. Go away from here. Get Out!"

"No I won't go away. I'm going to stay right here until I kill you, said Coyote.

"We can't help it but you will always be flat headed from your experience," said Coyote as he left and started again on his world trip.

From there the traveller continued on to what is today Missoula, Montana. Coyote walked along between Lolo and Fort Missoula when he thought he heard someone call his name. But he could not see anyone. He trotted forward again, and heard his name called again. He stopped and when he looked into the woods, he saw two women sitting down beside a river.

Coyote swam across the river, and went up the embankment to the women. They were very good-looking women, thought Coyote, maybe he could marry one of them. He sat down between them, but they stood up and danced down to the river.

"Wait for me," called Coyote. "I'll go swimming with you." He took off his jacket beaded with shells, denoting that he was a great Chief.

"We don't want to wait, we are having a good time dancing," replied the two women as they danced on into the river. When Coyote joined them, they pushed him down into the water and tried to drown him.

Later, Coyote's partner, Fox, appeared from around a bend in the river, looking for something to eat. When he looked into the river and saw something lying on the bottom, he said, "This must be my partner, Coyote!"

Fox pulled out the object, and when he was sure it was Coyote, he made a magical jump over him and brought Coyote back to life.

Coyote said, "Oh, I must have had a long sleep."

"You were not asleep, you were dead," replied Fox. "Why did you go near those women, you had no right to be near them, they are from the Shell tribe."

Coyote climbed partway up the hill and set the grass on fire. Later it was discovered that the women could not escape, and died in the fire. Today some shells have a black side, because they had been burned at the same time.