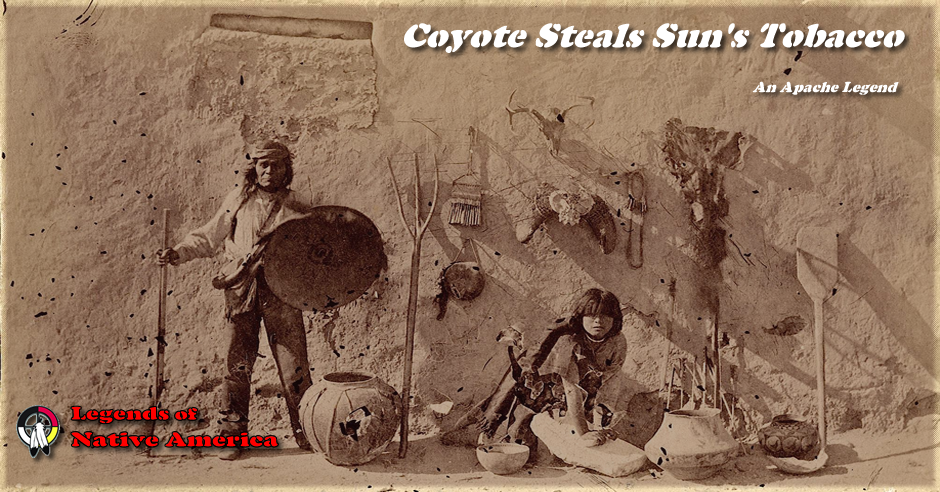 One day Slim Coyote started out to Sun's house. When he got there Sun was not home, but his wife was. "Where is my cousin Sun?" he asked.

Sun's wife said that he had gone out and was not home yet.

Coyote saw Sun's tobacco bag hanging up on the side of the house. "I came to smoke and talk with my cousin," said Slim Coyote, "so give me a smoke while I'm waiting.

He won't mind, he's my cousin." Coyote was talking to Sun's wife as if she were his mother-in-law.

She handed him the tobacco bag, and he used it to fill his own little buckskin bag. Then he quickly hid his bag and rolled a cigarette, so that he actually got off with a lot of Sun's tobacco without her noticing. "Since my cousin hasn't come back yet, I guess I won't wait after all," Coyote told her, and started home.

Pretty soon Sun arrived. "whose been here and gone again?" he asked, looking at his depleted tobacco bag.

"Somebody who said he was your cousin," answered his wife. She told him what had happened, and Sun was very angry.

"I'll get that fellow," he said. He went out front where he had Black Wind Horse tied, and saddled him up and set off after Coyote. Black Wind Horse could fly, and when he traveled he made a noise like lightening.

A light rain started to fall and covered up Coyote's tracks, but Sun could still follow the
thief by the ashes from his cigarette.

It kept raining, and pretty soon the tobacco Coyote had with him started to grow. Soon it was putting out leaves then flowers. At last it ripened and dried, and the wind scattered the seeds everywhere.

When the Sun saw this, he gave up chasing Coyote and went home.

When Coyote got back to the Apache camp where he was living, he kept his tobacco for himself and wouldn't give any away.

The Apache held a council on how to get Coyote's tobacco away from him, and they decided to pretend to give him a wife.

"We're going to give you a wife," they told him.

Coyote said, "You're trying to fool me."

They set up a new wickiup for Coyote, dressed a young boy as a girl, and told the boy not to let Coyote touch him until just before dawn. They made a bed in the new wickiup, and Coyote felt so good that he gave them all his tobacco .

Just about dusk the boy dressed as a girl went over and sat down beside Coyote in his new wickiup. Slim Coyote was so excited he could not stand up but just crawled around on the ground. "why don't you come to bed?" he said to his bride. "Let's hurry and go to bed." But the boy just sat there.

After a while, when Coyote was more and more impatient, the boy lay down by him but not close to him. "I want you to lie close," Coyote said, and tried to touch the boy.

But the boy said, "Don't!" and pushed Coyote's hand away. This kept up all night, until just before dawn Coyote made a grab and caught hold of the boy's penis. He let go right away and jumped back.

"Get away from me, get back from me; you're a boy not a girl," he said. Then Coyote got up and called the people. "You lied to me," he said. "You didn't give me a wife at all. Give me my tobacco back!"

But no matter how loudly he yelled, they wouldn't do it. This is the way the people first got tobacco.