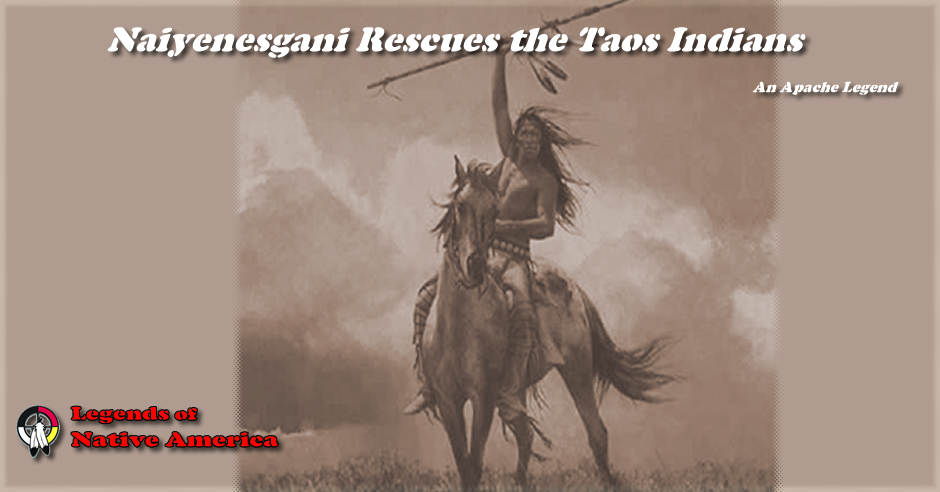 Naiyenesgani went among the Pueblo Indians. While there he stole and concealed their corn.

When they came to him, they said, "Apache go outside."

Naiyenesgani made a motion over the corn with his hand, and it became snakes. Then they were friendly to him. He put his hand over the place again and there were piles of corn as before.

Again, they said, "Apache go outside."

He made passes before the piles of corn and they turned into snakes which moved about. Again, they became friendly with him.

He moved his hand over the place and the corn lay in rows again.

"Go outside Apache," they said again. He moved his hand over the corn. The rows changed into snakes having wings. "Shut the door," he said. They commenced throwing the corn away. They shut the door. They came to Naiyenesgani who passed his hands over the place again and the corn lay in rows.

"You certainly are a medicineman," they said. "Over here is a sinking place where our people have been taken into the ground away from us."

"Very well," said Naiyenesgani, and began taking off his clothes. He took off his moccasins, his leggings, his shirt, and his hat, and said to them, "Cover them all with turquoise for me." They put down a few pieces for him.

"Cover them entirely," he said, speaking as a chief. Then they covered a little more of his clothing.

He then went to the sinking place. He made a black hoop, a blue one, a yellow one, and one of mixed colors. He came to the place where there was much water standing. In this lake there lived a monster which sucked in the Pueblo people. Standing at the east, he made four motions with the black hoop, and then threw it in.

The water moved still further from the center. Finally, he stood at the north with the hoop of mixed colors. He made motions four times and threw it in. The water came together and vanished.

In the center of the place where the water had stood, the top of a ladder was sticking up. When Naiyenesgani started to go there a crane which was on guard was about to give warning. He gave him a red stone for a present and the crane did not make a noise.

When Naiyenesgani came near him, YeLagôLtsôde, the monster, held him by the sole of his foot. He kicked and the monster fell. When he went in, he saw an old man and an old woman lying there, human beings.

Then Naiyenesgani took the fire drill and twirled it until the place was full of smoke."Now, go out," he said to the captives.

From each of four doors two people passed out.

"There are no other people," said the monster.

"There are innumerable people," one replied.

"All of you go out," he told the people, and again he. filled the place with smoke. "Hurry go out with it," he told them. More people came out.

"Are these all?" he asked again.

Those who had come out said, "There are still people there."
Then he filled the place with smoke again by means of the fire drill. "Go out with it," he said. "All of you go out."

He asked again if there were no more inside. They had all come out. Then he sent the old man and old woman into the water. The Pueblo Indians followed him about. He sent them to their homes and they went off one by one.