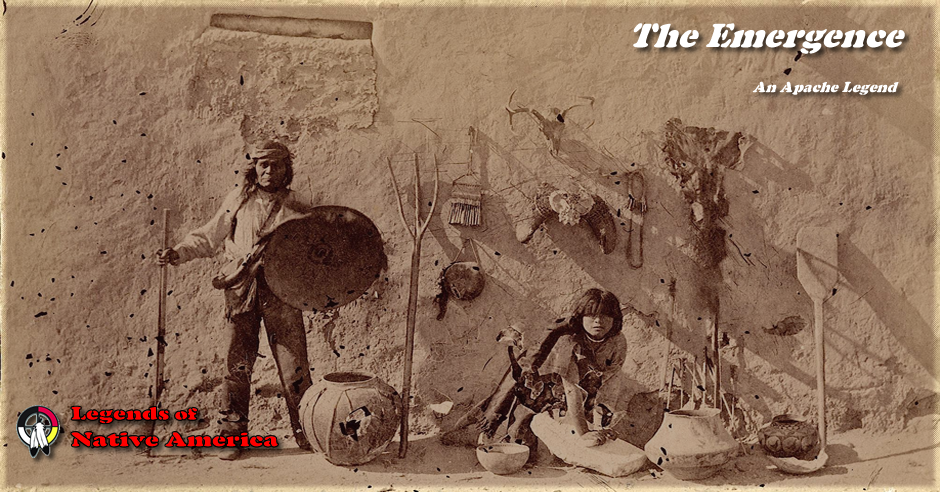 In the beginning, the people were coming up. He made a mountain that continued to increase in height. Then he caused reeds to stand vertically in the center.

The people were gathered about the mountain, watching. When the reeds were approaching the sky, four girls went up the mountain and twisted them.

They went down and left them in this condition. The people tried in vain to make the reeds grow. "Go up and see what has happened to them," he told someone. This person, on ascending the mountain, found the reeds were twisted and that those who had done it had gone down.

The messenger, when he came down, said, "The reeds are twisted."

Then four ladders were made and placed in position: one black, one blue, one yellow, and one variegated. Then whirlwind went to the world above and looked. When he came back he reported that there was much water there.

After a time, the one in charge, told Beaver to go and see how conditions were. When Beaver got to the upper world, he found the water receding and commenced piling dirt in front of it to retain it.

When Beaver did not return, Badger was told to go after him and see what had happened.

He found Beaver building a dam in front of the water. "When the people come up and the children are dying of thirst, they will drink this," said Beaver in explanation of his conduct. Badger went into the mud (producing certain markings). The two went down and reported that the land was already exposed.

The people prepared to ascend. The black ladder was placed in position and the people went up by means of it until it was worn out.

There remained behind a feeble old woman and an old man. The people went away and left them sitting there. "Take us out," one of them called after them. The people stopped and looked back at the couple but did not take them out.

Then one of them said, "You will come back here to me."

Then the people moved away towards the east along four parallel trails under four chiefs. Those who went by the first road had fighting. Those going along the second road were fortunate and came back without having had a fight. The people who had gone by the third road, having had a fight, returned.