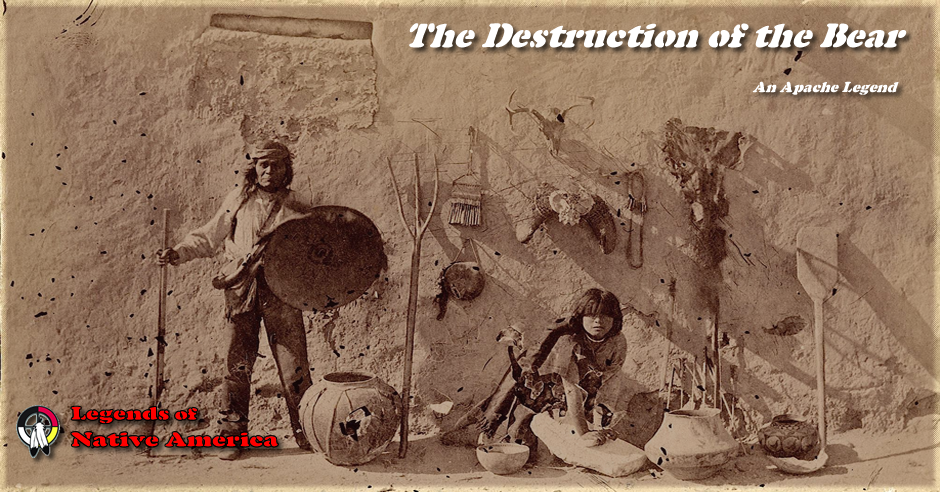 An Apache boy, while playing with his comrades, pretended to be a bear, and ran into a hole in the hillside. When he came out his feet and hands had been transformed into bear's paws. A second time he entered the den, and his limbs were changed to the knees and elbows.

Four times he entered the den, and then came forth the voracious cac-tla-yæ that devoured his former fellow-beings. One day the bear met a fox in the mountains. "I am looking for a man to eat," said Bear.
"So am I," said Fox, "but your legs are so big and thick you cannot run very fast to catch them. You ought to allow me to trim down those posts a little, so you can run as swift as I."

Bear consented to have the operation performed, and Fox not only cut the flesh from the legs of Bear, but also broke the bones with his knife, thus killing the dreaded man-eater.

Taking the leg bones of Bear with him, he went to the home of the bear family, and there found two other bears.

These monsters preyed upon the people, who were unable to kill them, as they left their hearts at home when off on their marauding expeditions.

Fox remained in hiding until the bears went away. When they ran among the Indians, Fox responded to the cries for assistance, not by flying to attack the bears, but by hastening to cut their hearts in two.

The bears were aware that their hearts had been tampered with, and rushed with all speed to rescue them, but fell dead just before they reached Fox.

Thus Fox destroyed one of the most dreaded of man's enemies of that primeval time.