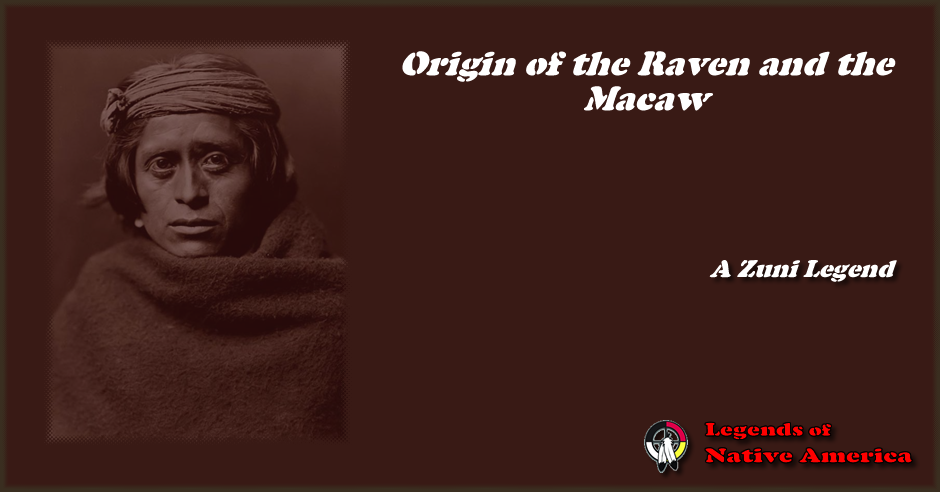 The priest who was named Yanauluha carried ever in his hand a staff which now in the daylight was plumed and covered with feathers - yellow, blue-green, red, white, black, and varied. Attached to it were shells, which made a song-like tinkle. The people when they saw it stretched out their hands and asked many questions.

Then the priest balanced it in his hand, and struck with it a hard place, and blew upon it. Amid the plumes appeared four round things-mere eggs they were. Two were blue like the sky and two dun-red like the flesh of the Earth-mother.

Then the people asked many questions; "These," said the priests, "are the seed of living beings. Choose which ye will follow. From two eggs shall come beings of beautiful plumage, colored like the grass and fruits of summer. Where they fly and ye follow, shall always be summer. Without toil, fields of food shall flourish. And from the other two eggs shall come evil beings, piebald, with white, without colors. And where these two shall fly and ye shall follow, winter strives with summer. Only by labor shall the fields yield fruit, and your children and theirs shall strive for the fruits. Which do ye choose?"

"The blue! The blue!" cried the people, and those who were strongest carried off the blue eggs, leaving the red eggs to those who waited. They laid the blue eggs with much gentleness in soft sand on the sunny side of a hill, watching day by day. They were precious of color; surely they would be the precious birds of the Summer-land. Then the eggs cracked and the birds came out, with open eyes and pin feathers under their skins. "We chose wisely," said the people. "Yellow and blue, red and green, are their dresses, even seen through their skins." So they fed them freely of all the foods which men favor. Thus they taught them to eat all desirable food. But when the feathers appeared, they were black with white bandings. They were ravens. And they flew away croaking hoarse laughs and mocking our fathers.

But the other eggs became beautiful macaws, and were wafted by a toss of the priest's wand to the faraway Summer-land.

So those who had chosen the raven, became the Raven People. They were the Winter People and they were many and strong. But those who had chosen the macaw, became the Macaw People. They were the Summer People, and few in number, and less strong, but they were wiser because they were more deliberate. The priest Yanauluha, being wise, became their father, even as the Sun-father is among the little moons of the sky. He and his sisters were the ancestors of the priest-keepers of things.

Origin of the Raven and the Macaw
A Zuni Legend
Katharine Berry Judson, Myths and Legends of California and the Old Southwest, 1912