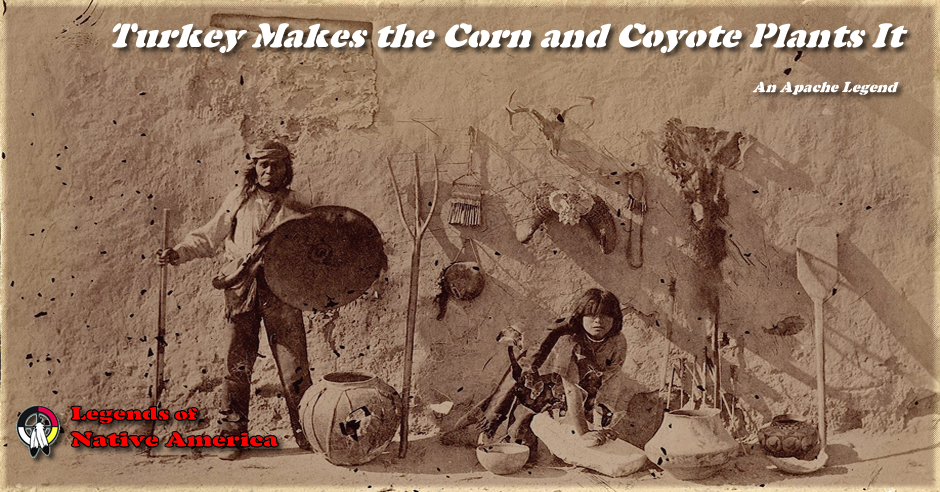 Long ago when all the animals talked like people, Turkey overheard a boy begging his sister for food.

"What does your little brother want?" he asked the girl.

"He's hungry, but we have nothing to eat," she said.

And when he shook himself for the fourth time, white corn dropped out.

Bear came over, and Turkey told him, "I'm helping to feed my sister and my brother, over there."

Bear said, "You can shake only four times to make food come out of you, but I have every kind of food on me, from my feet to my head."

Turkey said to the boy and girl, "I have four kinds of corn seeds here for you, and this is a good place to plant them."

The sister and brother cut digging sticks and made holes with them. In the holes they planted all their corn seeds. The next day the corn had already come up and was about a foot and a half high.

The girl said, "we still have some squash seeds here," so they planted them too. The boy and girl asked Turkey for more corn seed. "The corn is coming up nicely," they said,"so we want to make another farm and plant more corn there." Turkey gave them the seed, and they left him to look after their first fields while they started off to make the
other farm.

When they came back, they heard Turkey hollering at the corn field. They ran down there and saw him dragging one wing along the ground on the side toward them. There were snakes on the other side of him, and he pretended to have a broken wing to lure the snakes away and shield the boy and girl.

The squash plants had young squash on them, and the corn had grown tall and formed ears and tassels. The tassels had pollen in them, and the snakes had come to gather the pollen out of the corn plants.

Turkey told the boy and the girl to stay away from the corn for four days, when the snakes would be finished. At the end of the four days, the corn was ripe.

Turkey told them, "This will be the only time when the corn will come up in four days. From now on it will take quite a while."

By now, the brother and sister had planted corn three times, and they gave seeds to other people. Then Slim Coyote came and asked for some.

"The corn you planted is growing well, and the ears are coming out on it," he said. "I'd like to have some seeds to plant for myself." Coyote would have to do lots of work if he wanted to raise his corn, but that wasn't his plan. "These other people here plant their corn, and after it's grown they have to cook it. Me, I am not going to do it that way. I'll
cook my corn first, and then plant it, so I won't have to bother to cook it when it's ripe."

Here's where Coyote made a big mistake. He cooked his corn, ate some, planted quite a patch of the rest. He felt pretty good about it. "Now I've done well for myself. You people have to cook your corn after you plant it, but mine will be already cooked," he said.

After planting, he went off with the rest of the people to gather acorns, but when they returned to their fields, Coyote's had nothing growing on it at all.

He said angrily, "You people must have taken the hearts out of the corn seeds you gave to me."

"No, we didn't do that," they told him, "but you cooked the heart out of them before you planted."

Coyote asked for more seeds and planted them the right way this time. So his corn grew :the day after he planted it, it was up about a foot and a half. He felt good. The people who had planted their corn at the beginning were harvesting now and tying it up into bundles.

Coyote saw these and wanted some. People got mad at Coyote because he was always asking them for corn.

"I just want some green ears to feed my children," he would say. "As soon as my corn is ripe, I'll pay you back."

The other people had all their corn in and stripped now, but their squashes were still growing in the field. Coyote stole their squash, and the people all came to his camp. They wanted to know if he was the one who was stealing their squash.

Coyote pretended to get angry. "You're always blaming me for stealing everything. There are lots of camps over there. Why do you choose mine to come to with your accusations?"

But the people knew about Coyote's thieving ways. "From now on, don't make your farm near us. Move away and live someplace else!" they said.

"All right. There are several of you that I was going to repay with corn, but I won't do it now that you've treated me this way," he said. So Coyote's family lived poorly, and they never bothered to cook anything before they ate it.