The Search for the Middle & the Hardening of the World 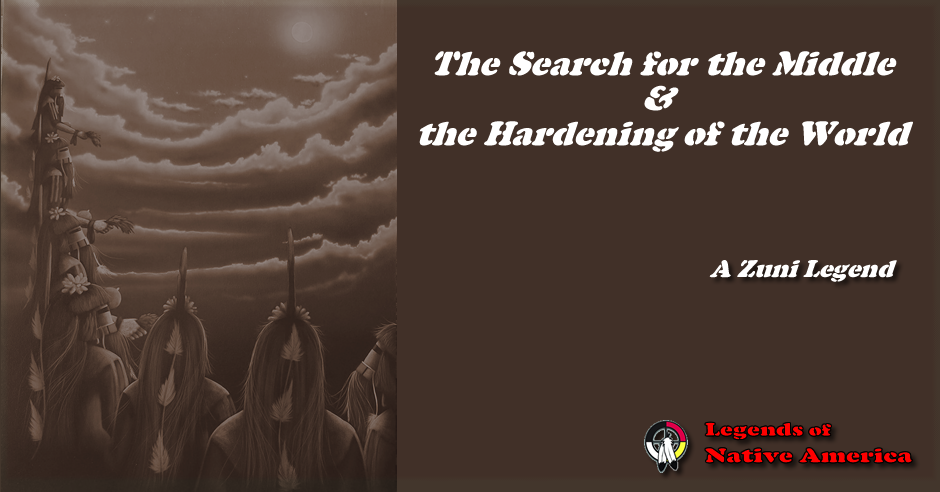 Creatures became fierce, beasts of prey, and others turned timid, becoming their quarry. Wretchedness and hunger abounded and black magic. Fear was everywhere among them, so the people, in dread of their precious possessions, became wanderers, living on the seeds of grass, eaters of dead and slain things. Yet, guided by the Beloved Twain, they sought in the light and under the pathway of the Sun, the Middle of the world, over which alone they could find the earth at rest.

When the tremblings grew still for a time, the people paused at the First of Sitting Places. Yet they were still poor and defenseless and unskilled, and the world still moist and unstable. Demons and monsters fled from the earth in times of shaking, and threatened wanderers.

Then the Two took counsel of each other. The Elder said the earth must be made more stable for men and the valleys where their children rested. If they sent down their fire bolts of thunder, aimed to all the four regions, the earth would heave up and down, fire would, belch over the world and burn it, floods of hot water would sweep over it, smoke would blacken the daylight, but the earth would at last be safer for men. So the Beloved Twain let fly the thunderbolts.

The mountains shook and trembled, the plains cracked and crackled under the floods and fires, and the hollow places, the only refuge of men and creatures, grew black and awful. At last thick rain fell, putting out the fires. Then water flooded the world, cutting deep trails through the mountains, and burying or uncovering the bodies of things and beings. Where they huddled together and were blasted thus, their blood gushed forth and flowed deeply, here in rivers, there in floods, for gigantic were they. But the blood was charred and blistered and blackened by the fires into the black rocks of the lower mesas. There were vast plains of dust, ashes, and cinders, reddened like the mud of the hearth place. Yet many places behind and between the mountain terraces were unharmed by the fires, and even then green grew the trees and grasses and even flowers bloomed. Then the earth became more stable, and drier, and its lone places less fearsome since monsters of prey were changed to rock.

But ever and again the earth trembled and the people were troubled. "Let us again seek the Middle," they said. So they traveled far eastward to their second stopping place, the Place of Bare Mountains.

Again the world rumbled, and they traveled into a country to a place called Where-treeboles- stand-in-the-midst-of-waters. There they remained long, saying, "This is the Middle." They built homes there. At times they met people who had gone before, and thus they learned war. And many strange things happened there, as told in speeches of the ancient talk.

Then when the earth groaned again, the Twain bade them go forth, and they murmured. Many refused and perished miserably in their own homes, as do rats in falling trees, or flies in forbidden food.

But the greater number went forward until they came to Steam-mist-in-the-midst-ofwaters. And they saw the smoke of men's hearth fires and many houses scattered over the hills before them. When they came nearer, they challenged the people rudely, demanding who they were and why there, for in their last standing-place they had had touch of war.

"We are the People of the Seed," said the men of the hearth-fires, "born elder brothers of ye, and led of the gods."

"No," said our fathers, "we are led of the gods and we are the Seed People . . . " Long lived the people in the town on the sunrise slope of the mountains of Kahluelawan, until the earth began to groan warningly again. Loath were they to leave the place of the Kaka and the lake of their dead. But the rumbling grew louder and the Twain Beloved called, and all together they journeyed eastward, seeking once more the Place of the Middle. But they grumbled amongst themselves, so when they came to a place of great promise, they said, "Let us stay here. Perhaps it may be the Place of the Middle." So they built houses there, larger and stronger than ever before, and more perfect, for they were strong in numbers and wiser, though yet unperfected as men. They called the place "The Place of Sacred Stealing."

Long they dwelt there, happily, but growing wiser and stronger, so that, with their tails and dressed in the skins of animals, they saw they were rude and ugly.

In chase or in war, they were at a disadvantage, for they met older nations of men with whom they fought. No longer they feared the gods and monsters, but only their own kind. So therefore the gods called a council.

Changed shall ye be, oh our children, "cried the Twain." Ye shall walk straight in the pathways, clothed in garments, and without tails, that ye may sit more straight in council, and without webs to your feet, or talons on your hands."

So the people were arranged in procession like dancers. And the Twain with their weapons and fires of lightning shored off the forelocks hanging down over their faces, severed the talons, and slitted the webbed fingers and toes. Sore was the wounding and loud cried the foolish, when lastly the people were arranged in procession for the razing of their tails.

But those who stood at the end of the line, shrinking farther and farther, fled in their terror, climbing trees and high places, with loud chatter. Wandering far, sleeping ever in tree tops, in the far-away Summerland, they are sometimes seen of far-walkers, long of tail and long handed, like wizened men-children.

But the people grew in strength, and became more perfect, and more than ever went to war. They grew vain. They had reached the Place of the Middle. They said, "Let us not wearily wander forth again even though the earth tremble and the Twain bid us forth." And even as they spoke, the mountain trembled and shook, though far-sounding.

But as the people changed, changed also were the Twain, small and misshapen, hardfavored and unyielding of will, strong of spirit, evil and bad. They taught the people to war, and led them far to the eastward.

At last the people neared, in the midst of the plains to the eastward, great towns built in the heights. Great were the fields and possessions of this people, for they knew how to command and carry the waters, bringing new soil. And this, too, without hail or rain. So our ancients, hungry with long wandering for new food, were the more greedy and often gave battle.

It was here that the Ancient Woman of the Elder People, who carried her heart in her rattle and was deathless of wounds in the body, led the enemy, crying out shrilly. So it fell out ill for our fathers. For, moreover, thunder raged and confused their warriors, rain descended and blinded them, stretching their bow strings of sinew and quenching the flight of their arrows as the flight of bees is quenched by the sprinkling plume of the honey-hunter. But they devised bow strings of yucca and the Two Little Ones sought counsel of the Sun-father who revealed the life-secret of the Ancient Woman and the magic powers over the under-fires of the dwellers of the mountains, so that our enemy in the mountain town was overmastered. And because our people found in that great town some hidden deep in the cellars, and pulled them out as rats are pulled from a hollow cedar, and found them blackened by the fumes of their war magic, yet wiser than the common people, they spared them and received them into their next of kin of the Black Corn. . . .

But the tremblings and warnings still sounded, and the people searched for the stable Middle.

Now they called a great council of men and the beasts, birds, and insects of all kinds. After a long council it was said,

"Where is Water-skate? He has six legs, all very long. Perhaps he can feel with them to the uttermost of the six regions, and point out the very Middle."

So Water-skate was summoned. But lo! It was the Sun-father in his likeness which appeared. And he lifted himself to the zenith and extended his fingerfeet to all the six regions, so that they touched the north, the great waters; the west, and the south, and the east, the great waters; and to the northeast the waters above. and to the southwest the waters below. But to the north his finger foot grew cold, so he drew it in.

Then gradually he settled down upon the earth and said, "Where my heart rests, mark a spot, and build a town of the Mid-most, for there shall be the Mid-most Place of the Earth-mother."

And his heart rested over the middle of the plain and valley of Zuni. And when he drew in his finger-legs, lo! there were the trail-roads leading out and in like stays of a spider's nest, into and from the mid-most place he had covered.

Here because of their good fortune in finding the stable Middle, the priest father called the town the Abiding-place-of-happy-fortune.

The Search for the Middle & the Hardening of the World
A Zuni Legend
Katharine Berry Judson, 1912