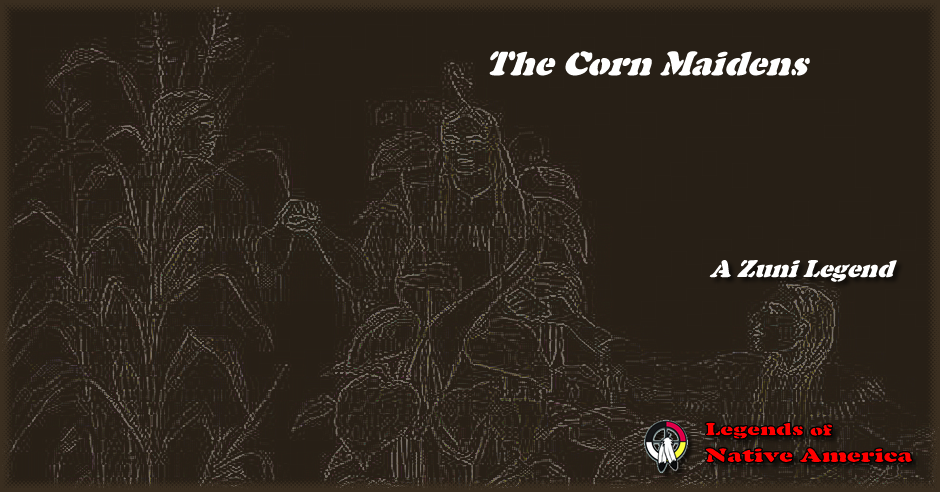 After long ages of wandering, the precious Seed-things rested over the Middle at Zuni, and men turned their hearts to the cherishing of their corn and the Corn Maidens instead of warring with strange men.

But there was complaint by the people of the customs followed. Some said the music was not that of the olden time. Far better was that which of nights they often heard as they wandered up and down the river trail. Wonderful music, as of liquid voices in caverns, or the echo of women's laughter in water-vases. And the music was timed with a deep-toned drum from the Mountain of Thunder. Others thought the music was that of the ghosts of ancient men, but it was far more beautiful than the music when danced the Corn Maidens.

Others said light clouds rolled upward from the grotto in Thunder Mountain like to the mists that leave behind them the dew, but lo! even as they faded the bright garments of the Rainbow women might be seen fluttering, and the broidery and paintings of these dancers of the mist were more beautiful than the costumes of the Corn Maidens. Then the priests of the people said, "It may well be Paiyatuma, the liquid voices his flute and the flutes of his players."

Now when the time of ripening corn was near, the fathers ordered preparation for the dance of the Corn Maidens. They sent the two Master-Priests of the Bow to the grotto at Thunder Mountains, saying., "If you behold Paiyatuma, and his maidens, perhaps they will give us the help of their customs."

Then up the river trail, the priests heard the sound of a drum and strains of song. It was Paiyatuma and his seven maidens, the Maidens of the House of Stars, sisters of the Corn Maidens.

The God of Dawn and Music lifted his flute and took his place in the line of dancers. The drum sounded until the cavern shook as with thunder. The flutes sang and sighed as the wind in a wooded canon while still the storm is distant. White mists floated up from the wands of the Maidens, above which fluttered the butterflies of Summer-land about the dress of the Rainbows in the strange blue light of the night.

Then Paiyatuma, smiling, said, "Go the way before, telling the fathers of our custom, and straightway we will follow."

Soon the sound of music was heard, coming from up the river, and soon the Flute People and singers and maidens of the Flute dance. Up rose the fathers and all the watching people, greeting the God of Dawn with outstretched hand and offering of prayer meal. Then the singers took their places and sounded their drum, flutes, and song of clear waters, while the Maidens of the Dew danced their Flute dance. Greatly marvelled the people, when from the wands they bore forth came white clouds, and fine cool mists descended.

Now when the dance was ended and the Dew Maidens had retired, out came the beautiful Mothers of Corn. And when the players of the flutes saw them, they were enamored of their beauty and gazed upon them so intently that the Maidens let fall their hair and cast down their eyes. And jealous and bolder grew the mortal youths, and in the morning dawn, in rivalry, the dancers sought all too freely the presence of the Corn Maidens, no longer holding them so precious as in the olden time.

And the matrons, intent on the new dance, heeded naught else. But behold! The mists increased greatly, surrounding dancers and watchers alike, until within them, the Maidens of Corn, all in white garments, became invisible. Then sadly and noiselessly they stole in amongst the people and laid their corn wands down amongst the trays, and laid their white broidered garments thereupon, as mothers lay soft kilting over their babes. Then even as the mists became they, and with the mists drifting, fled away, to the far south Summer-land.