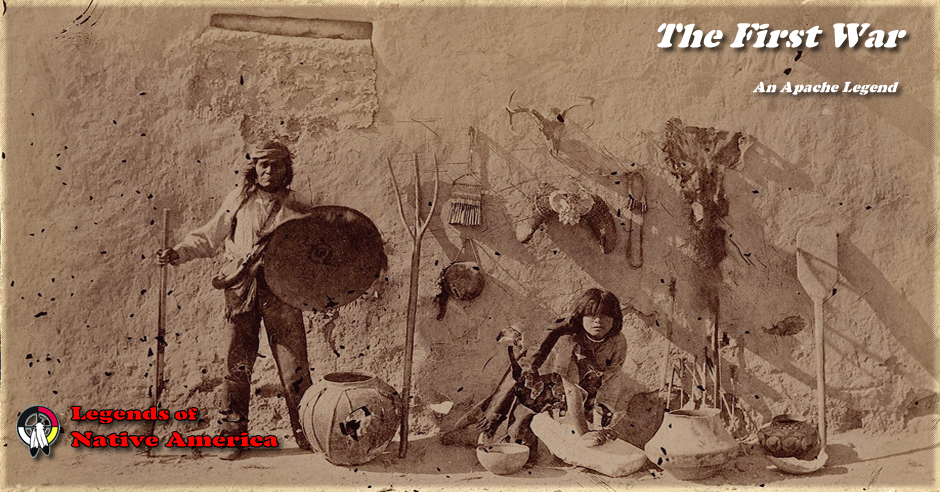 Raven divined to see whether people would die. First, he threw in the stick over which the skins are stretched in dressing. When this came to the top of the water he tried again by throwing the stone muller. It did not come to the surface and the people began to die.

The people moved away in four directions but they could not sleep. The old couple of the lower world to whom they came back gave them four lice, two of which were placed in their hair, and two in their clothes., When they lay down they were all very sleepy. It was the biting of the lice that made them sleep. Some of the people occupied the country near the head of the Arkansas River; others, were living along the Sangro de Cristo Range; and the remainder on the west side of the Rio Grande. There were two chiefs of those on the east side of the river named, Indayedittsitdn, and Indakadigadn.

The first named chief made a corral and gave a feast to which he invited all the people. Indakadigadn, alone, of all the people, refused to attend. After being repeatedly called by name, he finally came, holding an arrow in place on his stretched bow, saying, "Why did you call my name?"

"I did not call it for any particular purpose," the other replied. "I thought you called it for some reason," said the first, from whom the people were going away, because he was making motions as if to shoot. He shot an arrow to the feathers through Indayedittsitdn's arm and then went home.

Neither this, nor a third message to the same effect, had any result. The fourth time he instructed the messenger to say, "Do not be afraid, come to me, and bring some medicine." Then Indakadigadn quickly took up his medicine bag, looked inside, and selected the required herb. When he came to the wounded man he found the arm badly swollen. "My grandchild, I did not intend to shoot you." He then cut into the outside of the arm, took out the arrow, and applied the
medicine.

"The swelling will be gone in four days," he told him. He was well in four days and became the grandson of the chief who had shot him.

Having moved the camp to the east side of the river, Indakadigadn, brought together five hundred men and started away to fight with the enemy. He took along ten horses for his own use in battle. When they came to the enemy and were surrounded by them, the chief said, "Wait until to-morrow and you will have some fun. Keep away from me."

The next morning, the chief said, "Now, we are ready." There were many arrows ready for his use. He selected four men, who, remaining out of the battle, should carry home the report of the outcome.

"Who is chief?" asked one of the enemy.

"I am the only chief," replied Indakadigadn.

"Who is your chief?" he asked of the enemy. There were four chiefs of the enemy. Indakadigadn rode his horse toward the enemy and commenced the fighting. A number of men were killed on both sides. When the chief's horse was killed under him, he jumped on another and continued fighting.

He continued to do this as his people decreased in numbers until five horses had been killed under him. When he had mounted the sixth horse and his people had all been killed the enemy pulled him to the ground and killed him with a knife.

The four men who had been selected for the purpose went back to their country and reported, "Our people are all dead." When Indayedittsitdn had received the message he cut off his hair saying, "My grandson has been killed, I will mourn for him properly."