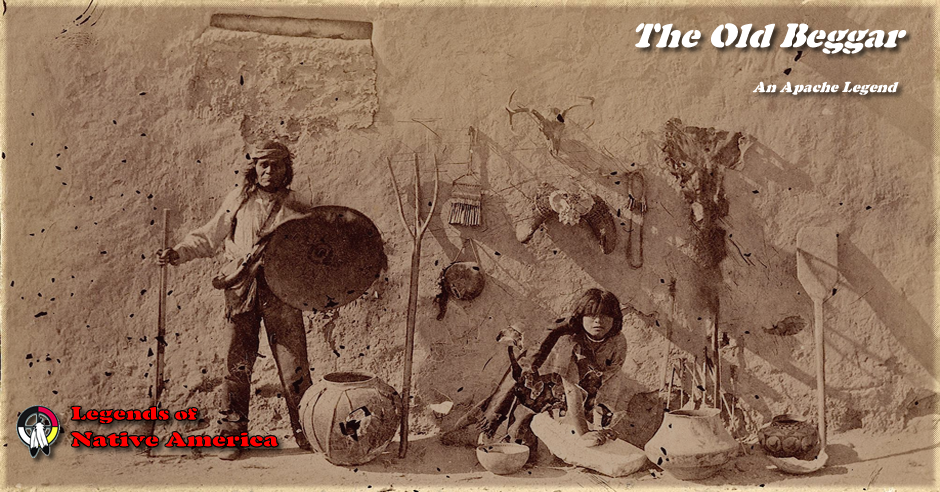 There was once an old Apache who went begging from camp to camp every evening. His wife tried to reform the old beggar by playing a trick upon him.

One night during his absence she fetched a bleached horse's pelvis into the tipi, and painted it so that it somewhat resembled a face.

The old man came home about midnight, and beheld, as he thought, the head of a monster glaring at him in the bright moonlight from the door of the lodge. Twice the woman held up the pelvis, when he turned in terror-stricken flight, calling, "Help, help! Something has killed my woman. Bring spears, bring arrows!"

With a spear he cautiously lifted the side of the tipi, but his wife threw out the bone at the back, and he could not discover the cause of the apparition.

The next night he went out to beg again. He found plenty of buffalo meat at one of the lodges, some of which was given him to carry home.

There were several horses lying outside the lodge, and the old man mistook one of them for a log, and jumped upon its back. The frightened horse rose under him, and soon succeeded in bucking him off.

As the Indians came out of the tipi to investigate the cause of the stampede of the ponies, the old man said, "I told you long ago to break this horse, and now I must do it myself!" Thus avoiding, in some measure, their ridicule, he groped about until he found his meat again, and then hastened home.

The next morning he decided to move his camp. His family formed a large party, and he wished to precede them on the march. His sons were alarmed, and told him that the Cheyenne would kill and scalp him.

"Oh, no," said he, "nobody will attack a warrior like me," and he walked on ahead of the others.

His three sons painted their faces black and white, so that they were no longer recognizable, and then ran around in front of their father. As they ran toward him he shot all his arrows, but was too frightened to shoot straight.

The young men caught him; one ran his fingernail around his scalp, while another placed a fresh buffalo's heart on the old man's head. The blood from the heart ran down his face, and he thought he was scalped.

His sons allowed him to go back toward the party; on the way he came to a river, where he stooped to drink, and saw the reflected image of the raw flesh upon his head. He was then sure that he had been scalped, and sat down to die.

His sons made signs to him to cross the river and go back. Again frightened by their gestures, he ran until he reached the women, who all laughed at his story of being scalped by the Cheyenne.

The sons had explained the joke to their mother, and when the old man appealed to his wife for sympathy she only laughed at him, as he sat and shook with fear before her. At last they pulled off the strange head-covering, and a fresh burst of ridicule of the "brave warrior" followed.