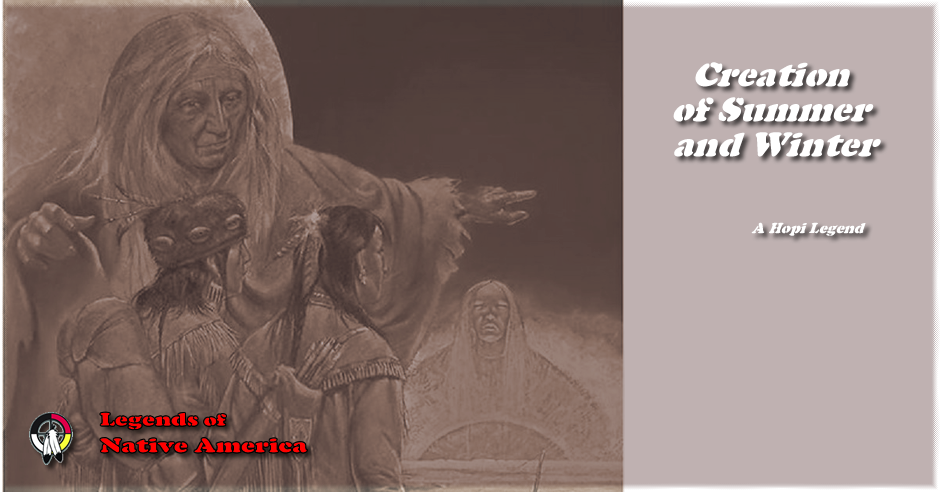 The oldest tradion of the people of Acoma and Laguna indicates that they lived on some island; that their homes were destroyed by tidal waves, earthquakes, and red-hot stones from the sky. They fled and landed on a low, swampy coast. From here they migrated to the northwest, and wherever they made a long stay they built a "White City" (Kush-kut-ret).

The fifth White City was built somewhere in southern Colorado or northern New Mexico. The people were obliged to leave it on account of cold, drought and famine.

The first governor of Acoma had a daughter named Co-chin-ne-na-ko; she was the wife of Shakok, the spirit of Winter. After he came to live with them the seasons grew colder, colder; the snow and ice stayed longer; the corn would no longer mature; and the people were compelled to live on cactus leaves (E-mash-chu) and other wild plants.

One day Co-chin-ne-na-ko went out to gather cactus leaves and burn off the thorns so that she could take them home for food. She had a leaf singed and was eating it, when upon looking up she saw a young man coming towards her. He had on a yellow shirt, woven of corn silk, a belt, and tall pointed hat; green leggings made of the green moss which grows in the springs and ponds, and moccasins beautifully embroidered with flowers and butterflies. In his hand he carried an ear of green corn. He came up and saluted her. She replied. Then he asked her what she was eating. She told him that the people were almost starved; that no corn would grow; and that they were all compelled to live on cactus leaves.

"Here," he said, "take this ear of corn and eat it, and I will go and bring you an armful to take home with you." He started and soon out of sight, going towards the south. In a very short time, however, he returned, bringing a large bundle of green corn (ken-utch), which he laid at her feet. Co-chin-ne-na-ko asked him where he had found the corn, and if it grew near by. He replied that he had brought it from his home, far to the south, where the corn grows and the flowers bloom all the year. "Oh, how I would like to see your country; will you not take me with you to your home?" she said. "Your husband, Shakok, the Spirit of Winter, would be angry if I should take you away," he said. She said, he is cold; ever since he came here no corn will grow, no flowers will bloom, and the people are compelled to live on prickly-pear leaves."

"Well", said he, "take the bundle of corn home with you and do not throw any of the the husks outside the door; then come tomorrow and I will bring you more. I will meet you here." Then, bidding her farewell, he left again for his home in the south. Co-chin-ne-na-ko took the bundle of corn he had given her and started to go home to the town. She had not gone far when she met her sisters, for becoming alarmed at her long stay they had come out to look for her. They were very much surprised on seeing her with an armful of green corn instead of cactus leaves.

Co-chin-ne-na-ko told them how the young man had come to her and brought her the corn. So they helped her carry it home. When they arrived their father and mother were wonderfully surprised, but pleased to see them bringing big ears of green corn instead of cactus leaves. They asked Co-chin-ne-na-ko where she had found it, and she told them, as she had already told her sisters, that a young man, whom she minutely described, had brought her the corn, and had asked her to meet him at the same place on the following day, and that he would accompany her home. "It is Miochin," said her father, "it is Miochin." "It is surely Miochin", said her mother. "Bring him home with you by all means." The next day Co-chin-ne-na-ko went to the place she had met Miochin, for he really was Miochin, the Spirit of Summer. He was already there waiting for her. He had big bundles of corn.

Between them they carried it to the town, and there was enough to feed all the people of Acoma, and Miochin was welcomed at the house of the governor. In the evening, as was his custom, Shakok, the Sprit of Winter, and husband of Co-chin-ne-na-ko, returned from the north where he spent the days playing with the north wind, and with the snow and sleet and hail. He came in a blinding storm of snow, sleet and hail.

On reaching the town he knew that Miochin was there, and called out to him, "Ha, Miochin, are you here?" Miochin advanced to meet him. "Ha, Miochin, now I will destroy you." "Ha, Shakok, I will destroy you," answered Miochin. Shakok stopped, and as Miochin advanced towards him the snow and hail melted and the fierce wind turned into a summer breeze. Shakok was covered with frost, icicles hung all about him, but as Miochin advanced towards him the frost melted, the icicles dropped off, and his clothing was revealed. It was made of dry bleached rushes (Ska-ra-ska-ru-ka). Shakok said, "I will not fight you now, but will meet you here four days from now and fight you till one or the other is beaten. The winner shall have Co-chin-ne-na-ko." With that Shakok left in a rage.

The wind again roared and shook the very walls, but the people were warm in their houses. Miochin was there. Next day he left for his home in the south. Arriving there he made preparations for the meeting with Shakok. He first sent an eagle to his friend Yat-chum-me Moot, who lived in the west, asking him to help him in his fight with Shakok. Then he called all the birds, insects, and four-legged animals that live in summer lands. All these he called to help him. The bat (Pick-le-ke) was his advance guard and his shield, as the tough skin of the bat could best withstand the sleet and hail that Shakok would throw at him. On the third day Yat-chum-me kindled his fires, and heated the thin flat stones that he was names after. Then big black clouds of smoke rolled up from the south and covered the sky. When Shakok left he went to the north and called to him all the bird and the four-legged animals of the winter lands. He called these all to come and help him in the coming battle. The magpie (Shro-ak-ah) was his shield and advance guard. On the morning of the fourth day the two enemies could be seen coming. In the north the black storm clouds of winter, with snow, sleet, and hail were bringing Shakok to the battle. In the south, Yatchum-me piled more wood on his fires and great puffs of steam and smoke arose and formed into clouds. These were coming fast towards Acoma, and the place where the fight was to take place, and were bringing Miochin, the Spirit of Summer. The thick smoke of Yat-chum-me's fires blackened all the animals Miochin had with him, and that is why the animals of the south are black and brown. Forked blazes of lightning shot out of the clouds that were bringing Miochin. Each came fast. Shakok from the north; Miochin form the south. At last they reached the town, and the flashes from the clouds singed the feathers and hair on the birds and animals that came with Shakok, turning them white; that is the reason why all the animals and birds that live in the north are white, or have some white about them. Shakok and Miochin were now close together. From the north Shakok threw snow-flakes, sleet, and hail that hissed through the air a blinding storm. In the south the big black clouds rolled along, and from Yat-chum-me's fires still rose up great puffs of smoke and steam that heated the air and melted Shakok's snow and sleet and hail, and compelled him to fall back. At last Shakok called for a truce. Miochin agreed, and the winds stopped and the snow and rain ceased falling.

They met at the wall of Acoma, and Shakok said, "I am defeated; you are the winner; Co-chin-ne-na-ko is yours." Then they agreed that Shakok should rule during half of the year, and Miochin during the other half, and that neither should trouble the other thereafter.

Ever since then one half of the year has been cold and the other half warm.