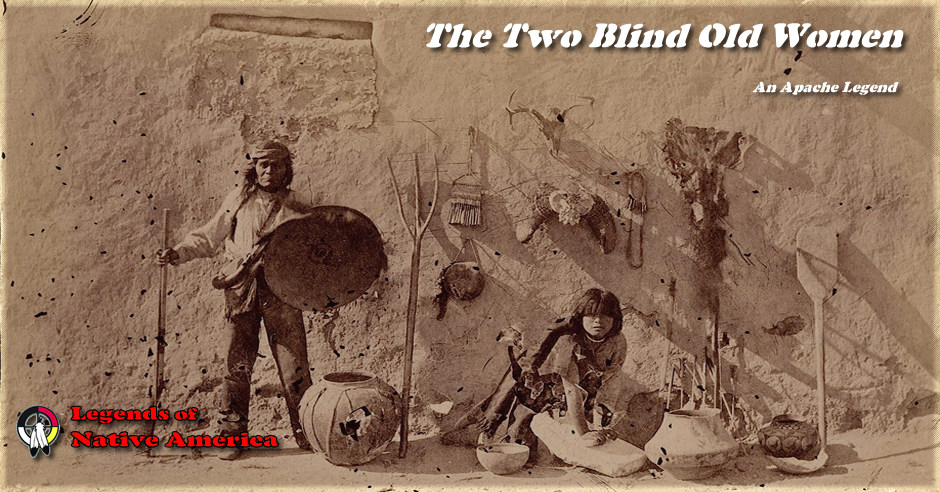 Two old women were once cooking a pot of mush which two mischievous boys were trying to steal. Both were blind, so one sat on each side of the fire.

They kept their sticks waving back and forth above the pot, to prevent any one from taking advantage of their blindness and taking the vessel or its contents.

The boys found an empty pot, which they substituted for the one on the fire. Finding that the pot now had an empty ring when struck by their sticks, the old women concluded that the water had boiled away, and the mush must be sufficiently cooked.

"Let us smoke while it cools," said one.

"Very well," said the other, and they began to smoke alternately the single pipe in their possession. As they smoked they kept the sticks waving to and fro above the empty vessel.

The boys took the pipe from the hand of one old woman as she was passing it to the other.

"You are smoking all the time," said the second woman.

"I gave you the pipe long ago," said the first.

"You did not," said the second. Just then the boys struck the first woman in the mouth, and she, thinking it was the other woman, struck her companion, who, of course, retaliated, and they proceeded to belabor one another with their staves.

When they were tired of fighting they went to eat their mush; each thought the other had eaten it, which set them to fighting again.