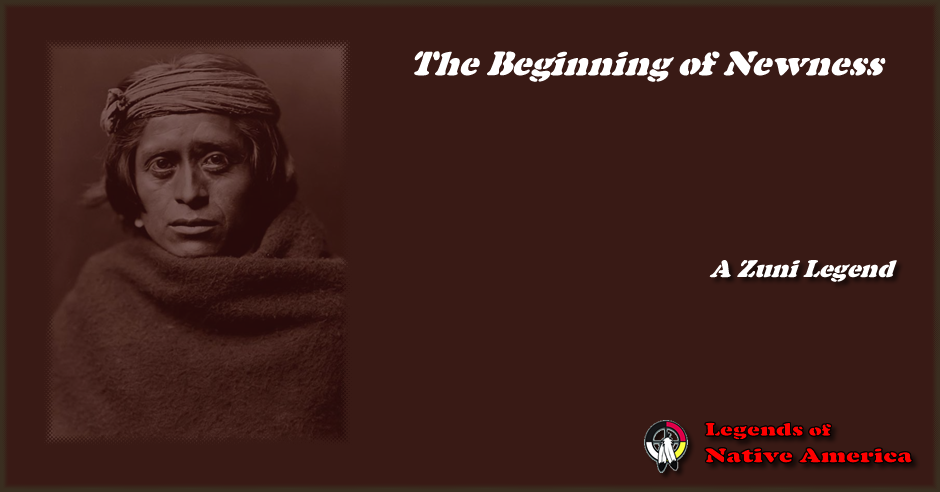 Before the beginning of the New-making, the All-father Father alone had being. Through ages there was nothing else except black darkness.

In the beginning of the New-making, the All-father Father thought outward in space, and mists were created and up-lifted. Thus through his knowledge he made himself the Sun who was thus created and is the great Father. The dark spaces brightened with light. The cloud mists thickened and became water.

From his flesh, the Sun-father created the Seed-stuff of worlds, and he himself rested upon the waters. And these two, the Four-fold-containing Earth-mother and the Allcovering Sky-father, the surpassing beings, with power of changing their forms even as smoke changes in the wind, were the father and mother of the soul beings.

Then as man and woman spoke these two together. "Behold!" said Earth-mother, as a great terraced bowl appeared at hand, and within it water, "This shall be the home of my tiny children. On the rim of each world-country in which they wander, terraced mountains shall stand, making in one region many mountains by which one country shall be known from another."

Then she spat on the water and struck it and stirred it with her fingers. Foam gathered about the terraced rim, mounting higher and higher. Then with her warm breath she blew across the terraces. White flecks of foam broke away and floated over the water. But the cold breath of Sky-father shattered the foam and it fell downward in fine mist and spray. Then Earth-mother spoke:

"Even so shall white clouds float up from the great waters at the borders of the world, and clustering about the mountain terraces of the horizon, shall be broken and hardened by thy cold. Then will they shed downward, in rain-spray, the water of life, even into the hollow places of my lap. For in my lap shall nestle our children, man-kind and creaturekind, for warmth in thy coldness."

So even now the trees on high mountains near the clouds and Sky-father, crouch low toward Earth mother for warmth and protection. Warm is Earth-mother, cold our Skyfather. Then Sky-father said, "Even so. Yet I, too, will be helpful to our children." Then he spread his hand out with the palm downward and into all the wrinkles of his hand he set the semblance of shining yellow corn-grains; in the dark of the early world-dawn they gleamed like sparks of fire.

"See," he said, pointing to the seven grains between his thumb and four fingers, "our children shall be guided by these when the Sun-father is not near and thy terraces are as darkness itself. Then shall our children be guided by lights." So Sky-father created the stars. Then he said, "And even as these grains gleam up from the water, so shall seed grain like them spring up from the earth when touched by water, to nourish our children." And thus they created the seed-corn. And in many other ways they devised for their children, the soul-beings.

But the first children, in a cave of the earth, were unfinished. The cave was of sooty blackness, black as a chimney at night time, and foul. Loud became their murmurings and lamentations, until many sought to escape, growing wiser and more man-like. But the earth was not then as we now see it. Then Sun-father sent down two sons (sons also of the Foam-cap), the Beloved Twain, Twin Brothers of Light, yet Elder and Younger, the Right and the Left, like to question and answer in deciding and doing. To them the Sun-father imparted his own wisdom.

He gave them the great cloud-bow, and for arrows the thunderbolts of the four quarters. For buckler, they had the fog-making shield, spun and woven of the floating clouds and spray. The shield supports its bearer, as clouds are supported by the wind, yet hides its bearer also. And he gave to them the fathership and control of men and of all creatures. Then the Beloved Twain, with their great cloud-bow lifted the Sky-father into the vault of the skies, that the earth might become warm and fitter for men and creatures. Then along the sun-seeking trail, they sped to the mountains westward. With magic knives they spread open the depths of the mountain and uncovered the cave in which dwelt the unfinished men and creatures. So they dwelt with men, learning to know them, and seeking to lead them out.

Now there were growing things in the depths, like grasses and vines. So the Beloved Twain breathed on the stems, growing tall toward the light as grass is wont to do, making them stronger, and twisting them upward until they formed a great ladder by which men and creatures ascended to a second cave.

Up the ladder into the second cave-world, men and the beings crowded, following closely the Two Little but Mighty Ones. Yet many fell back and were lost in the darkness. They peopled the under-world from which they escaped in after time, amid terrible earth shakings.

In this second cave it was as dark as the night of a stormy season, but larger of space and higher. Here again men and the beings increased, and their complainings grew loud. So the Twain again increased the growth of the ladder, and again led men upward, not all at once, but in six bands, to become the fathers of the six kinds of men, the yellow, the tawny gray, the red, the white, the black, and the mingled. And this time also many were lost or left behind.

Now the third great cave was larger and lighter, like a valley in starlight. And again they increased in number. And again the Two led them out into a fourth cave.

Here it was light like dawning, and men began to perceive and to learn variously, according to their natures, wherefore the Twain taught them first to seek the Sun-father. Then as the last cave became filled and men learned to understand, the Two led them forth again into the great upper world, which is the World of Knowing Seeing.

The Beginning of Newness
A Zuni Legend
Katharine Berry Judson, 1912