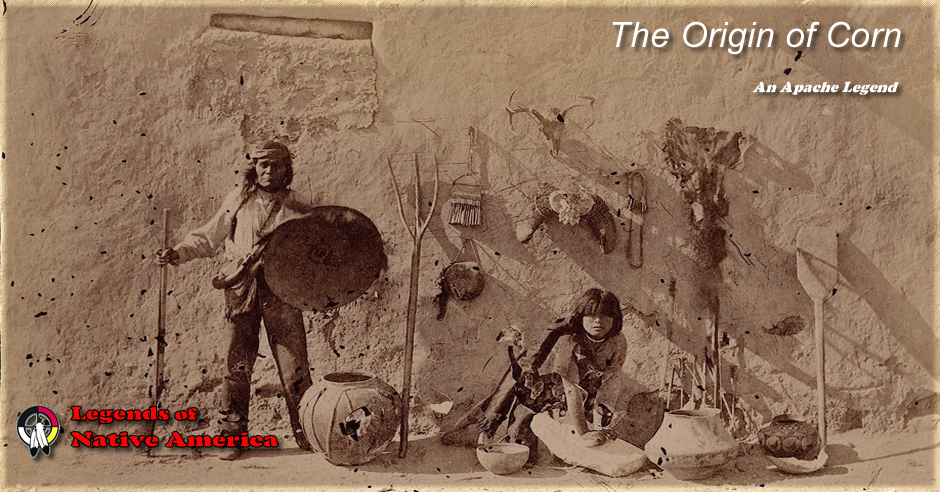 An Apache who was an inveterate gambler had a small tame turkey, which followed its master about everywhere. One day the Turkey told him that the people were tired of supporting him, as he gambled until he lost everything that they gave him.

They had decided to give him one more stock of supplies, and if he made away with that he should be killed.

Knowing that he could not resist the temptation to gamble if he had any property in his possession, he decided to leave the tribe before their wrath should overtake him.

The next day he began to chop down a tree from which to build a boat.

The Woodpecker, Tsitl-ka-ta, commanded him not to cut the tree; the woodpeckers must do that for him.

They also cut out the inside of the trunk, so that he could get into the cylinder, after which the spider sealed him in by making a web over each end. The woodpeckers carried the log, thus prepared, to the Rio Grande River, and threw it in. The faithful Turkey followed along the shore.

In the whirlpool above San Juan the log left the main current, and spun round and round until the Turkey pushed it on into the channel again. Farther down the river the log caught in the rocks in an upright position above a fall, but the Turkey again started it on its journey.

At the pueblo of Isleta, the boys hauled out the log with others for fuel. The Turkey' rescued the log and placed it in the water, and again, at another pueblo far down the river, the log was returned to the stream.

Far to the southward the log drifted out of the channel into a grove of cottonwoods. The man came out of the log and found a large quantity quantity of duck feathers lying about. That night he had no blanket in which to sleep, so he covered himself with duck feathers.

He killed a duck, and with the sinews of its legs made a bowstring.

After he landed, the Turkey soon overtook him, and they remained there for four days. During this time the man cleared a small space and leveled it.

"Why do you clear this place?" said the Turkey. "if you wish to plant something you must make a larger field."

Then he ran into the field from the east side, and the black corn lay behind him; from the south side, and the blue corn appeared; from the west, and the yellow corn was made; from the north, and the seeds of every kind of cereal and vegetable lay upon the ground.

The Turkey told the man to plant all these seeds in rows. In four days the growing plants appeared.

The Turkey helped his master tend the crops, and in four more days everything was ripe. Then the man took an ear of corn and roasted it, and found it good.