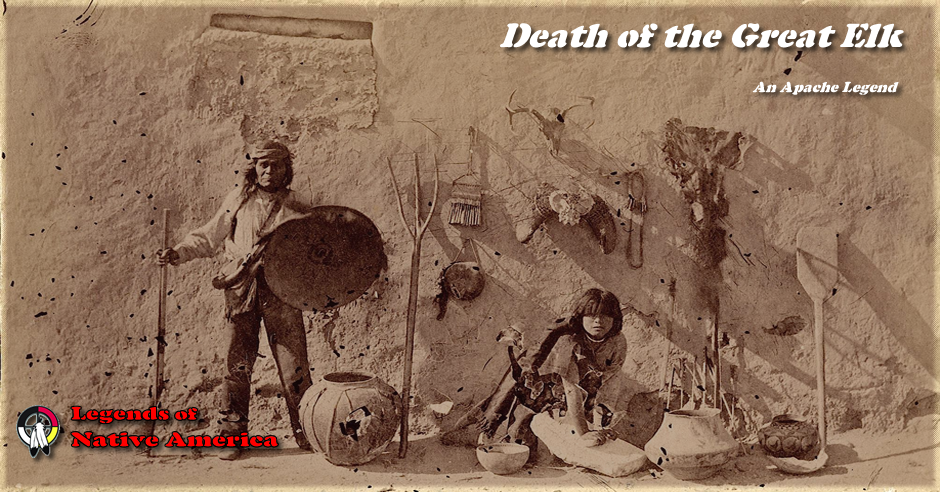 In the early days, animals and birds of monstrous size preyed upon the people; the giant Elk, the Eagle, and others devoured men, women, and children, until the gods were petitioned for relief. A deliverer was sent to them in the person of Djo-na-aì'-yì-în, the son of the old woman who lives in the West and the second wife of the Sun.

She divided her time between the Sun and the Waterfall, and by the latter bore a second son, named Ko-ba-tcis'-tci-ni, who remained with his mother while his brother went forth to battle with the enemies of mankind. In four days Djo-na-aì'-yì-în grew to manhood, then he asked his mother where the Elk lived.

She told him that the Elk was in a great desert far to the southward. She gave him arrows with which to kill the Elk.

In four steps he reached the distant desert where the Elk was lying. Djo-na-aì'-yì-în cautiously observed the position of the Elk from behind a hill. The Elk was lying on an open plain, where no trees or bushes were to be found that might serve to shelter Djona- aì'-yì-în from view while he approached. While he was looking at the Elk, with dried grass before his face, the Lizard, Mai-cu-i-ti-tce-tcê, said to him, "What are you doing, my friend? "

Djo-na-aì'-yì-în explained his mission whereupon the Lizard suggested that he clothe himself in the garments of the Lizard, in which he could approach the Elk in safety. Djona- aì'-yì-în tried four times before he succeeded in getting into the coat of the Lizard.

Next the Gopher, Mi-i-ni-li, came to him with the question, "What are you doing here, my friend?" When Djo-na-aì'-yì-în told the Gopher of his intention, the latter promised to aid him.

The Gopher thought it advisable to reconnoiter by burrowing his way underground to the Elk. Djo-na-aì'-yì-în watched the progress of the Gopher as that animal threw out fresh heaps of earth on his way. At length the Gopher came to the surface underneath the Elk, whose giant heart was beating like a mighty hammer.

He then proceeded to gnaw the hair from about the heart of the Elk. "What are youdoing?" said the Elk.

"I am cutting a few hairs for my little ones, they are now lying on the bare ground," replied the Gopher, who continued until the magic coat of the Elk was all cut away from about the heart of the Elk.

Then he returned to Djo-na-aì'-yì-în, and told the latter to go through the hole which he had made and shoot the Elk. Four times the Son of the Sun tried to enter the hole before he succeeded. When he reached the Elk, he saw the great heart beating above him, and easily pierced it with his arrows; four times his bow was drawn before he turned to escape through the tunnel which the Gopher had been preparing for him.

This hole extended far to the eastward, but the Elk soon discovered it, and, thrusting his antler into it, followed in pursuit. The Elk ploughed up the earth with such violence that the present mountains were formed, which extend from east to west.

The black spider closed the hole with a strong web, but the Elk broke through it and ran southward, forming the mountain chains which trend north and south. In the south the Elk was checked by the web of the blue spider, in the west by that of the yellow spider, while in the north the web of the many-colored spider resisted his attacks until he fell dying from exhaustion and wounds.

Djo-na-aì'-yì-în made a coat from the hide of the Elk, gave the front quarters to the Gopher, the hind quarters to the Lizard, and carried home the antlers. He found that the results of his adventures were not unknown to his mother, who had spent the time during his absence in singing, and watching a roll of cedar bark which sank into the earth or rose in the air as danger approached or receded from Djo-na-aì'-yì-în, her son.

Djo-na-aì'-yì-în next desired to kill the great Eagle, I-tsa. His mother directed him to seek the Eagle in the west. In four strides he reached the home of the Eagle, an inaccessible rock, on which was the nest, containing two young eaglets. His ear told him to stand facing the east when the next morning the Eagle swooped down upon him and tried to carry him off. The talons of the Eagle failed to penetrate the hard elk-skin by which he was covered.

"Turn to the south," said the ear, and again the Eagle came, and was again unsuccessful. Djo-na-aì'-yì-în faced each of the four points in this manner, and again faced toward the east; whereupon the Eagle succeeded in fastening its talons in the lacing on the front of the coat of the supposed man, who was carried to the nest above and thrown down before the young eagles, with the invitation to pick his eyes out.
As they were about to do this, Djo-na-aì'-yì-în gave a warning hiss, at which the young ones cried, "He is living yet."

"Oh, no," replied the old Eagle; "that is only the rush of air from his body through the holes made by my talons." Without stopping to verify this, the Eagle flew away. Djo-naaì'- yì-în threw some of the blood of the Elk which he had brought with him to the young ones, and asked them when their mother would return.

" In the afternoon when it rains," they answered.

When the mother Eagle came with the shower of rain in the afternoon, he stood in readiness with one of the Elk antlers in his hand. As the bird alighted with a man in her talons, Djo-na-aì'-yì-în struck her upon the back with the antler, killing her instantly. Going back to the nest, he asked the young eagles when their father returned.

"Our father comes home when the wind blows and brings rain just before sunset," they said. The male Eagle came at the appointed time, carrying a woman with a crying infant upon her back. Mother and babe were dropped from a height upon the rock and killed. With the second antler of the Elk, Djo-na-aì'-yì-în avenged their death, and ended the
career of the eagles by striking the Eagle upon the back and killing him.

The wing of this eagle was of enormous size; the bones were as large as a man's arm; fragments of this wing are still preserved at Taos. Djo-na-aì'-yì-în struck the young eagles upon the head, saying, "You shall never grow any larger." Thus deprived of their strength and power to injure mankind, the eagles relinquished their sovereignty with the
parting curse of rheumatism, which they bestowed upon the human race.

Djo-na-aì'-yì-în could discover no way by which he could descend from the rock, until at length he saw an old female Bat, Tca-na'-mi-în, on the plain below.

At first she pretended not to hear his calls for help; then she flew up with the inquiry,"How did you get here?"

Djo-na-aì'-yì-în told how he had killed the eagles. "I will give you all the feathers you may desire if you will help me to escape," concluded he. The old Bat carried her basket, ilttsai-î-zîs, by a slender spider's thread. He was afraid to trust himself in such a small basket suspended by a thread, but she reassured him, saying; "I have packed mountain sheep in this basket, and the strap has never broken. Do not look while we are descending ; keep your eyes shut as tight as you can."

He began to open his eyes once during the descent, but she warned him in time to avoid mishap. They went to the foot of the rock where the old Eagles lay. Djo-na-aì'-yì-în filled her basket with feathers, but told her not to go out on the plains, where there are many small birds.

Forgetting this admonition, she was soon among the small birds, who robbed the old Bat of all her feathers. This accounts for the plumage of the small bird klo'-kîn, which somewhat resembles the color of the tail and wing feathers of the bald eagle.

The Bat returned four times for a supply of feathers, but the fifth time she asked to have her basket filled, Djo-na-aì'-yì-în was vexed. "You cannot take care of your feathers, so you shall never have any. This old skin on your basket is good enough for you."

"Very well," said the Bat, resignedly, "I deserve to lose them, for I never could take care of those feathers."