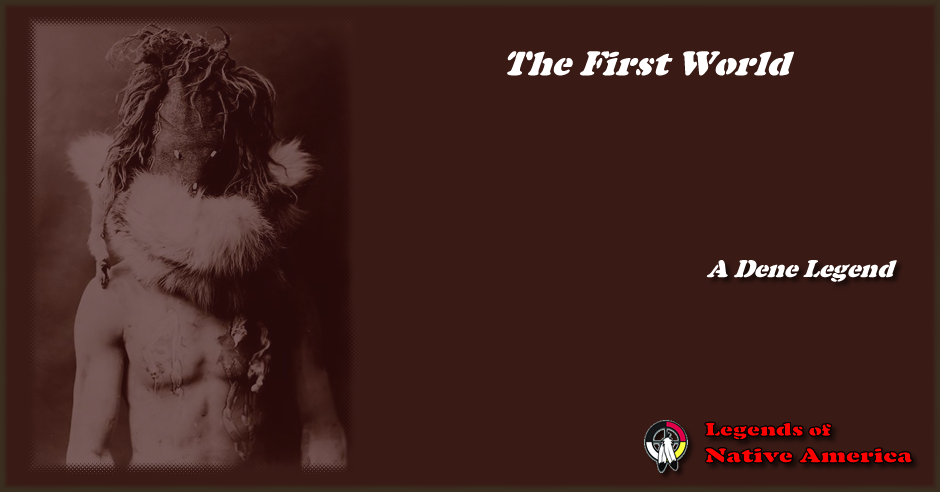 The First World, Ni'hodilqil, was black as black wool. It had four corners, and over these appeared four clouds. These four clouds contained within themselves the elements of the First World. They were in color, black, white, blue, and yellow.

The First World was small in size, a floating island in mist or water. On it there grew one tree, a pine tree, which was later brought to the present world for firewood.

Man was not, however, in his present form. The conception was of a male and a female being who were to become man and woman. The creatures of the First World are thought of as the Mist People; they had no definite form, but were to change to men, beasts, birds, and reptiles of this world.

Now on the western side of the First World, in a place that later was to become the Land of Sunset, there appeared the Blue Cloud, and opposite it there appeared the Yellow Cloud. Where they came together First Woman was formed, and with her the yellow corn. This ear of corn was also perfect. With First Woman there came the white shell and the turquoise and the yucca.

First Man stood on the eastern side of the First World. He represented the Dawn and was the Life Giver. First Woman stood opposite in the West. She represented Darkness and Death.

First Man burned a crystal for a fire. The crystal belonged to the male and was the symbol of the mind and of clear seeing. When First Man burned it, it was the mind's awakening.

First Woman burned her turquoise for a fire. They saw each other's lights in the distance. When the Black Cloud and the White Cloud rose higher in the sky, First Man set out to find the turquoise light. He went twice without success, and again a third time; then he broke a forked branch from his tree, and, looking through the fork, he marked the place where the light burned. And the fourth time he walked to it and found smoke coming from a home.

"Here is the home I could not find," First Man said.

First Woman answered: "Oh, it is you. I saw you walking around and I wondered why you did not come."

Again the same thing happened when the Blue Cloud and the Yellow Cloud rose higher in the sky. First Woman saw a light and she went out to find it. Three times she was unsuccessful, but the fourth time she saw the smoke and she found the home of First Man.

"I wondered what this thing could be," she said.

"I saw you walking and I wondered why you did not come to me," First Man answered.

First Woman saw that First Man had a crystal for a fire, and she saw that it was stronger than her turquoise fire. And as she was thinking, First Man spoke to her. "Why do you not come with your fire and we will live together." The woman agreed to this. So instead of the man going to the woman, as is the custom now, the woman went to the man.

About this time there came another person, the Great-Coyote-Who-Was- Formed-in-the-Water, and he was in the form of a male being. He told the two that he had been hatched from an egg. He knew all that was under the water and all that was in the skies.

First Man placed this person ahead of himself in all things. The three began to plan what was to come to pass; and while they were thus occupied another being came to them. He also had the form of a man, but he wore a hairy coat, lined with white fur, that fell to his knees and was belted in at the waist. His name was Atse'hashke', First Angry or Coyote.

He said to the three: "You believe that you were the first persons. You are mistaken. I was living when you were formed."

Then four beings came together. They were yellow in color and were called the tsts'na. or wasp people. They knew the secret of shooting evil and could harm others. They were very powerful.

This made eight people.

Four more beings came. They were small in size and wore red shirts and had little black eyes. They were the naazo'zi or spider ants. They knew how to sting, and were a great people.

After these came a whole crowd of beings. Dark colored they were, with thick lips and dark, protruding eyes. They were the wolazhi'ni, the black ants. They also knew the secret of shooting evil and were powerful; but they killed each other steadily.

By this time there were many people. Then came a multitude of little creatures. They were peaceful and harmless, but the odor from them was unpleasant. They were called the wolazhi'ni nlchu nigi, meaning that which emits an odor.

And after the wasps and the different ant people there came the beetles, dragonflies, bat people, the Spider Man and Woman, and the Salt Man and Woman, and others that rightfully had no definite form but were among those people who peopled the First World. And this world, being small in size, became crowded, and the people quarreled and fought among themselves, and in all ways made living very unhappy.