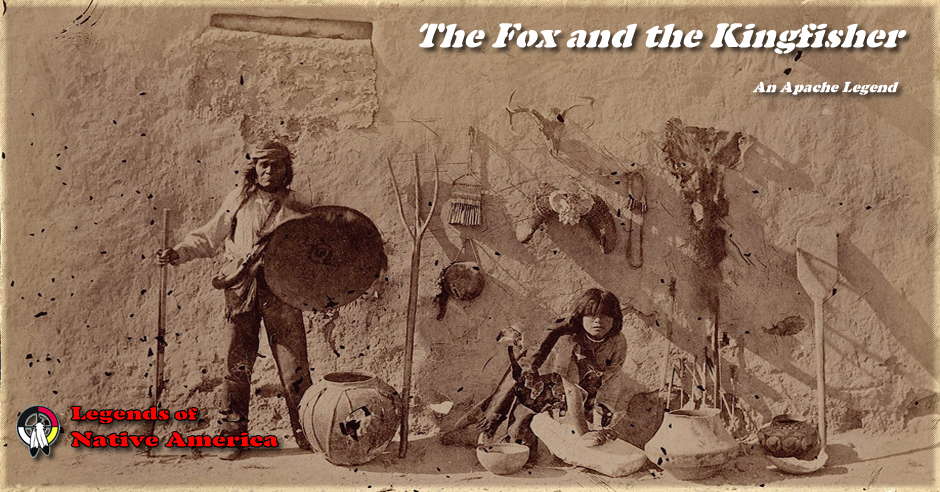 As Fox went on his way he met Kingfisher, Kêt-la'-i-le-ti, whom he accompanied to his home. Kingfisher said that he had no food to offer his visitor, so he would go and catch some fish for Fox.He broke through six inches of ice on the river and caught two fish, which he cooked and set before his guest.

Fox was pleased with his entertainment, and invited the Kingfisher to return the call. In due time the Kingfisher came to the home of the Fox, who said, " I have no food to offer you;" then he went down to the river, thinking to secure fish in the same manner as the
Kingfisher had done.

Fox leaped from the high bank, but instead of breaking through the ice he broke his head and killed himself.

Kingfisher went to him, caught him up by the tail, and swung Fox around to the right four times, thereby restoring him to life. Kingfisher caught some fish, and they ate together.

"I am a medicine-man," said Kingfisher; "that is why I can do these things. You must never try to catch fish in that way again."

After the departure of Kingfisher, Fox paid a visit to the home of Prairie-dog, where he was cordially received. Prairie-dog put four sticks, each about a foot in length, in the ashes of the camp-fire; when these were removed, they proved to be four nicely roasted prairie-dogs, which were served for Fox's dinner.

Fox invited the Prairie-dog to return the visit, which in a short time the latter did. Fox placed four sticks in the fire to roast, but they were consumed by it, and instead of palatable food to set before his guest he had nothing but ashes. Prairie-dog said to Fox," You must not attempt to do that. I am a medicine-man; that is why I can transform the wood to flesh." Prairie-dog then prepared a meal as he done before, and they dined.

Fox went to visit Buffalo, I-gûn-da, who exclaimed, "What shall I do? I have no food to offer you. Buffalo was equal to the emergency, however; he shot an arrow upward, which struck in his own back as it returned. When he pulled this out, a kidney and the fat surrounding it came out also. This he cooked for Fox, and added a choice morsel from his own nose.

As usual, Fox extended an invitation to his host to return the visit. When Buffalo came to call upon Fox, the latter covered his head with weeds in imitation of the head of the Buffalo. Fox thought he could provide food for their dinner as the Buffalo had done, so fired an arrow into the air; but when it came close to him on its return flight, he became frightened and ran away.

Buffalo then furnished meat for their meal as on the previous occasion. "You must not try this," said he; "I am a medicine-man; that is why I have the power."

Some time afterward, as Fox was journeying along, he met an Elk, Tsês, lying beside the trail. He was frightened when he saw the antlers of the Elk moving, and jumped to avoid what seemed to be a falling tree.

"The tree will fall on us," replied Fox.

"Oh, sit down; it won't fall. I have no food to offer you, but I will provide some." The Elk cut steaks from his own quarter, which the Fox ate, and before leaving Fox invited the Elk to return the visit.

When Elk came to see Fox, the latter tried unsuccessfully to cut flesh from his own meager flanks; then he drove sharpened sticks into his nose, and allowed the blood to run out upon the grass. This he tried in vain to transform into meat, and again he was indebted to his guest for a meal.