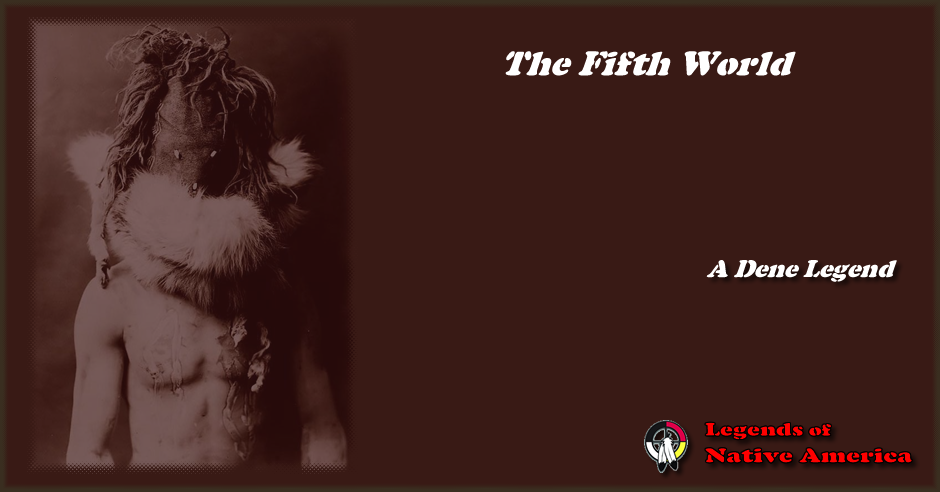 First Man was not satisfied with the Fourth World. It was a small barren land; and the great water had soaked the earth and made the sowing of seeds impossible. He planted the big Female Reed and it grew up to the vaulted roof of this Fourth World. First Man sent the newcomer, the badger, up inside the reed, but before he reached the upper world water began to drip, so he returned and said that he was frightened.

At this time there came another strange being. First Man asked him where he had been formed, and he told him that he had come from the Earth itself. This was the locust. He said that it was now his turn to do something, and he offered to climb up the reed.

The locust made a headband of a little reed, and on his forehead he crossed two arrows. These arrows were dressed with yellow tail feathers. With this sacred headdress and the help of all the Holy Beings the locust climbed up to the Fifth World. He dug his way through the reed as he digs in the earth now. He then pushed through mud until he came to water. When he emerged he saw a black water bird swimming toward him. He had arrows crossed on the back of his head and big eyes.

The bird said: "What are you doing here? This is not your country." And continuing, he told the locust that unless he could make magic be would not allow him to remain.

The black water bird drew an arrow from back of his head, and shoving it into his mouth drew it out his nether extremity. He inserted it underneath his body and drew it out of his mouth.

"That is nothing," said the locust. He took the arrows from his headband and pulled them both ways through his body, between his shell and his heart. The bird believed that the locust possessed great medicine, and he swam away to the East, taking the water with him.

The locust returned to the lower world and told the people that the beings above had strong medicine, and that he had had great difficulty getting the best of them.

Now two dark clouds and two white clouds rose, and this meant that two nights and two days had passed, for there was still no sun. First Man again sent the badger to the upper world, and he returned covered with mud, terrible mud. First Man gathered chips of turquoise which he offered to the five Chiefs of the Winds who lived in the uppermost world of all. They were pleased with the gift, and they sent down the winds and dried the Fifth World.

First Man and his people saw four dark clouds and four white clouds pass, and then they sent the badger up the reed. This time when the badger returned he said that he had come out on solid earth. So First Man and First Woman led the people to the Fifth World, which some call the Many Colored Earth and some the Changeable Earth. They emerged through a lake surrounded by four mountains. The water bubbles in this lake when anyone goes near.

The followers of the Wolf chief became the animals and birds; they turned into all the creatures that fly and crawl and run and swim.

And after all the beings were divided, and each had his own form, they went their ways.

This is the. story of the Four Dark Worlds and the Fifth, the World we live in. Some medicine men tell us that there are two worlds above us, the first is the World of the Spirits of Living Things, the second is the Place of Melting into One.