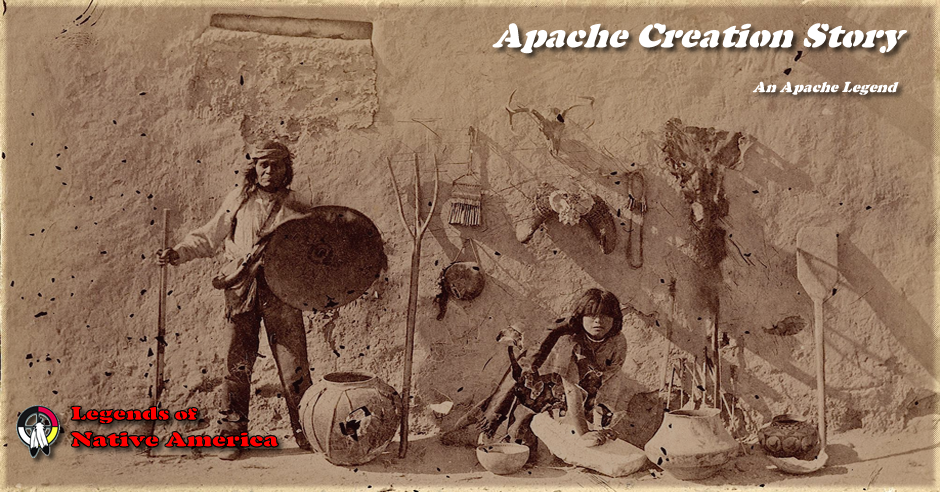 Animals, elements, the solar system, and natural phenomena are revered by the Apaches. That which is beyond their understanding is always ascribed to the supernatural.

In the beginning nothing existed--no earth, no sky, no sun, no moon, only darkness was everywhere.

Suddenly from the darkness emerged a thin disc, one side yellow and the other side white, appearing suspended in midair. Within the disc sat a small bearded man, Creator, the One Who Lives Above. As if waking from a long nap, he rubbed his eyes and face with both hands.

When he looked into the endless darkness, light appeared above. He looked down and it became a sea of light. To the east, he created yellow streaks of dawn. To the west, tints of many colours appeared everywhere. There were also clouds of different colours.

Creator wiped his sweating face and rubbed his hands together, thrusting them downward. Behold! A shining cloud upon which sat a little girl.

"Stand up and tell me where are you going," said Creator. But she did not reply. He rubbed his eyes again and offered his right hand to the Girl-Without-Parents.

"Where did you come from?" she asked, grasping his hand.

"From the east where it is now light," he replied, stepping upon her cloud.

"Where is the earth?" she asked.

Creator brushed his face with his hands, rubbed them together, then flung them wide open! Before them stood Sun-God. Again Creator rubbed his sweaty brow and from his hands dropped Small- Boy.

All four gods sat in deep thought upon the small cloud.

"What shall we make next?" asked Creator. "This cloud is much too small for us to live upon."

Then he created Tarantula, Big Dipper, Wind, Lightning-Maker, and some western clouds in which to house Lightning-Rumbler, which he just finished.

All four gods shook hands. In doing so, their sweat mixed together and Creator rubbed his palms, from which fell a small round, brown ball, not much larger than a bean.

Creator kicked it, and it expanded. Girl-Without-Parents kicked the ball, and it enlarged more. Sun-God and Small-Boy took turns giving it hard kicks, and each time the ball expanded. Creator told Wind to go inside the ball and to blow it up.

Tarantula spun a black cord and, attaching it to the ball, crawled away fast to the east, pulling on the cord with all his strength. Tarantula repeated with a blue cord to the south, a yellow cord to the west, and a white cord to the north. With mighty pulls in each direction, the brown ball stretched to immeasurable size--it became the earth! No hills, mountains, or rivers were visible; only smooth, treeless, brown plains appeared.

Creator scratched his chest and rubbed his fingers together and there appeared Hummingbird.

"Fly north, south, east, and west and tell us what you see," said Creator.

"All is well," reported Hummingbird upon his return. "The earth is most beautiful, with water on the west side."

But the earth kept rolling and dancing up and down. So Creator made four giant posts--black, blue, yellow, and white to support the earth. Wind carried the four posts, placing them beneath the four cardinal points of the earth. The earth sat still.

Creator sang, "World is now made and now sits still," which he repeated four times.

Then he began a song about the sky. None existed, but he thought there should be one. After singing about it four times, twenty- eight people appeared to help make a sky above the earth. Creator chanted about making chiefs for the earth and sky.

He sent Lightning-Maker to encircle the world, and he returned with three uncouth creatures, two girls and a boy found in a turquoise shell. They had no eyes, ears, hair, mouths, noses, or teeth. They had arms and legs, but no fingers or toes.

Sun-God sent for Fly to come and build a sweathouse. Girl- Without-Parents covered it with four heavy clouds. In front of the east doorway she placed a soft, red cloud for a foot-blanket to be used after the sweat.

Four stones were heated by the fire inside the sweathouse. The three uncouth creatures were placed inside. The others sang songs of healing on the outside, until it was time for the sweat to be finished. Out came the three strangers who stood upon the magic red cloud-blanket. Creator then shook his hands toward them, giving each one fingers, toes, mouths, eyes, ears, noses and hair.

Creator named the boy, Sky-Boy, to be chief of the Sky-People. One girl he named Earth-Daughter, to take charge of the earth and its crops. The other girl he named Pollen-Girl, and gave her charge of health care for all Earth-People.

Since the earth was flat and barren, Creator thought it fun to create animals, birds, trees, and a hill. He sent Pigeon to see how the world looked. Four days later, he returned and reported, "All is beautiful around the world. But four days from now, the water on the other side of the earth will rise and cause a mighty flood."

In four days, the flood occurred. Creator went up on a cloud, taking his twenty-eight helpers with him. Girl-Without-Parents put the others into the large, hollow ball, closing it tight at the top.

In twelve days, the water receded, leaving the float-ball high on a hilltop. The rushing floodwater changed the plains into mountains, hills, valleys, and rivers. Girl-Without-Parents led the gods out from the float-ball onto the new earth. She took them upon her cloud, drifting upward until they met Creator with his helpers, who had completed their work making the sky during the flood time on earth.

Together the two clouds descended to a valley below. There, Girl- Without-Parents gathered everyone together to listen to Creator.

"I am planning to leave you," he said. "I wish each of you to do your best toward making a perfect, happy world.

"You, Lightning-Rumbler, shall have charge of clouds and water.

"You, Pollen-Girl, care for their health and guide them.

"You, Girl-Without-Parents, I leave you in charge over all."

Creator then turned toward Girl-Without-Parents and together they rubbed their legs with their hands and quickly cast them forcefully downward. Immediately between them arose a great pile of wood, over which Creator waved a hand, creating fire.

Great billowy clouds of smoke at once drifted skyward. Into this cloud, Creator disappeared. The other gods followed him in other clouds of smoke, leaving the twenty-eight workers to people the earth.

Sun-God went east to live and travel with the Sun. Girl-Without- Parents departed westward to live on the far horizon. Small-Boy and Pollen-Girl made cloud homes in the south. Big Dipper can still be seen in the northern sky at night, a reliable guide to all.