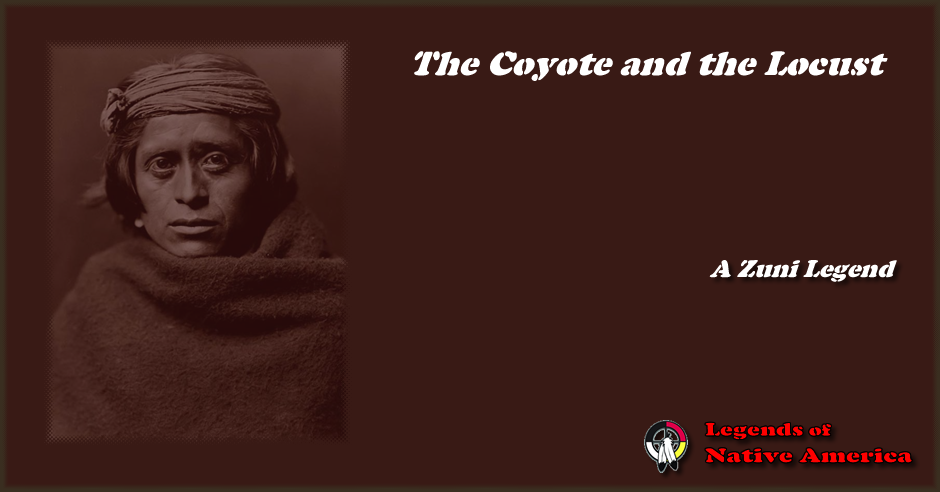 In the days of the ancients, there lived south of Zuñi, beyond the headland of rocks, at a place called Suski-ashokton ("Rock Hollow of the Coyotes"), an old Coyote. And this side of the headland of rocks, in the bank of a steep arroyo, lived an old Locust, near where stood a piñon tree, crooked and so bereft of needles that it was sunny.

One day the Coyote went out hunting, leaving his large family of children and his old wife at home. It was a fine day and the sun was shining brightly, and the old Locust crawled out of his home in the loam of the arroyo and ascended to one of the bare branches of the piñon tree, where, hooking his feet firmly into the bark, he began to sing and play his flute. The Coyote in his wanderings came along just as he began to sing these words:

Away up above on the pine-tree bough, closely clinging,

"Do you think so?" said the Locust, continuing his song.

"Goodness, yes!" cried the Coyote, shifting nearer. "What a song it is! Pray, teach it to me, so that I can take it home and dance my children to it. I have a large family at home."

"All right," said the Locust. "Listen, then." And he sang his song again: "Tchumali, tchumali, shohkoya,

"Delightful!" cried the Coyote. "Now, shall I try?

Then in a very hoarse voice the Coyote half growled and half sang (making a mistake here and there, to be sure) what the Locust had sung, though there was very little music in his repetition of the performance.

"Now, then, let us sing it over together."

And while the Locust piped shrilly the Coyote sang gruffly, though much better than at first, the song.

"There, now," exclaimed he, with a whisk of his tail; "didn't I tell you?" and without waiting to say another word he whisked away toward his home beyond the headland of rocks. As he was running along the plain he kept repeating the song to himself, so that he would not forget it, casting his eyes into the air, after the manner of men in trying to remember or to say particularly fine things, so that he did not notice an old Gopher peering at him somewhat ahead on the trail; and the old Gopher laid a trap for him in his hole.

The Coyote came trotting along, singing: "Shohkoya, shohkoya," when suddenly he tumbled heels over head into the Gopher's hole. He sneezed, began to cough, and to rub the sand out of his eyes; and then jumping out, cursed the Gopher heartily, and tried to recall his song, but found that he had utterly forgotten it, so startled had he been. "The lubber-cheeked old Gopher! I wish the pests were all in the Land of Demons!" cried he. "They dig their holes, and nobody can go anywhere in safety. And now I have forgotten my song. Well, I will run back and get the old Locust to sing it over again. If he can sit there singing to himself, why can't he sing it to me? No doubt in the world he is still out there on that piñon branch singing away." Saying which, he ran back as fast as he could. When he arrived at the piñon tree, sure enough, there was the old Locust still sitting and singing.

"Now, how lucky this is, my friend cried the Coyote, long before he had reached the place. "The lubber-cheeked, fat-sided old Gopher dug a hole right in my path; and I went along singing your delightful song and was so busy with it that I fell headlong into the trap he had set for me, and I was so startled that, on my word, I forgot all about the song, and I have come back to ask you to sing it for me again."

"Very well," said the Locust. "Be more careful this time." So he sang the song over. "Good! Surely I'll not forget it this time," cried the Coyote; so he whisked about, and away he sped toward his home beyond the headland of rocks. "Goodness!" said he to himself, as he went along; "what a fine thing this will be for my children! How they will be quieted by it when I dance them as I sing it! Let's see how it runs. Oh, yes! "Tchumali, tchumali, shohkoya,

Thli-i-i-i-i-p, piu-piu, piu-piu! fluttered a flock of Pigeons out of the bushes at his very feet, with such a whizzing and whistling that the Coyote nearly tumbled over with fright, and, recovering himself, cursed the Doves heartily, calling them "gray-backed, useless sagevermin"; and, between his fright and his anger, was so much shaken up that he again forgot his song.

Now, the Locust wisely concluded that this would be the case, and as he did not like the Coyote very well, having been told that sometimes members of his tribe were by no means friendly to Locusts and other insects, he concluded to play him a trick and teach him a lesson in the minding of his own affairs.

So, catching tight hold of the bark, he swelled himself up and strained until his back split open; then he skinned himself out of his old skin, and, crawling down the tree, found a suitable quartz stone, which, being light-colored and clear, would not make his skin look unlike himself. He took the stone up the tree and carefully placed it in the empty skin. Then he cemented the back together with a little pitch and left his exact counterfeit sticking to the bark, after which he flew away to a neighboring tree.

No sooner had the Coyote recovered his equanimity to some extent than, discovering the loss of his song and again exclaiming "No doubt he is still there piping away; I'll go and get him to sing it over,"--he ran back as fast as he could.

"Ah wha!" he exclaimed, as he neared the tree. "I am quite fatigued with all this extra running about. But, no matter; I see you are still there, my friend. A lot of miserable, gray-backed Ground-pigeons flew up right from under me as I was going along singing my song, and they startled me so that I forgot it; but I tell you, I cursed them heartily!

Now, my friend, will you not be good enough to sing once more for me?

He paused for a reply. None came.

"Why, what 's the matter? Don't you hear me?" yelled the Coyote, running nearer, looking closely, and scrutinizing the Locust. "I say, I have lost my song, and want you to sing for me again. Will you, or will you not?" Then he paused.

"Look here, are you going to sing for me or not?" continued the Coyote, getting angry. No reply.

The Coyote stretched out his nose, wrinkled up his lips, and snarled: "Look here, do you see my teeth? Well, I'll ask you just four times more to sing for me, and if you don't sing then, I'll snap you up in a hurry, I tell you. Will--you--sing--for me? Once. Will you sing-- for me? Twice. Two more times! Look out! Will you sing for me? Are you a fool? Do you see my teeth? Only once more! Will--you--sing--for me?" No reply.

"Well, you are a fool!" yelled the Coyote, unable to restrain himself longer, and making a quick jump, he snapped the Locust skin off of the bough, and bit it so hard that it crushed and broke the teeth in the middle of his jaw, driving some of them so far down in his gums that you could hardly see them, and crowding the others out so that they were regular tusks.

The Coyote dropped the stone, rolled in the sand, and howled and snarled and wriggled with pain. Then he got up and shook his head, and ran away with his tail between his legs. So excessive was his pain that at the first brook he came to he stooped down to lap up water in order to alleviate it, and he there beheld what you and I see in the mouths of every Coyote we ever catch,--that the teeth back of the canines are all driven down, so that you can see only the points of them, and look very much broken up. In the days of the ancients the Coyote minded not his own business and restrained not his anger. So he bit a Locust that was only the skin of one with a stone inside. And all his descendants have inherited his broken teeth. And so also to this day, when Locusts venture out on a sunny morning to sing a song, it is not infrequently their custom to protect themselves from the consequences of attracting too much attention by skinning themselves and leaving their counterparts on the trees.