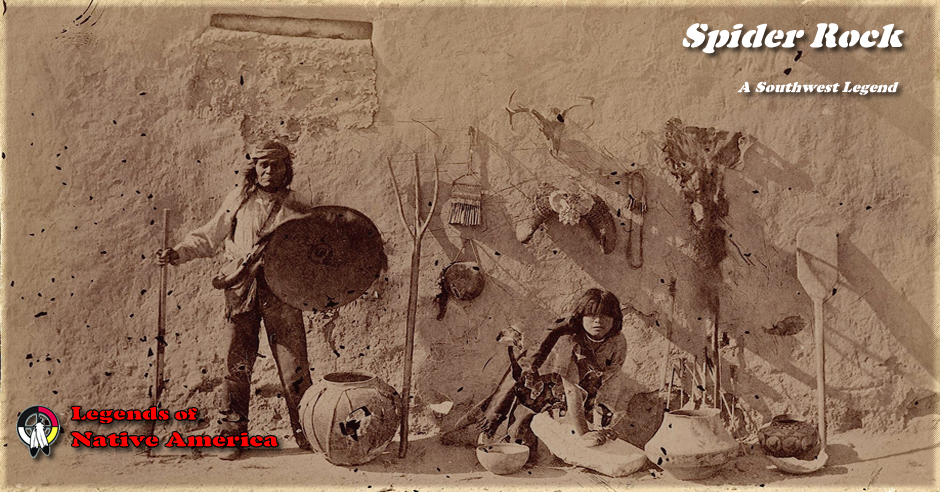 Stratified, multicolored cliff walls surround the canyon. For many, many centuries the Dine (Navajo) built caves and lived in these cliffs. Most of the caves were located high above the canyon floor, protecting them from enemies and flash floods.

Spider Woman possessed supernatural power at the time of creation, when Dine (Navajo) emerged from the third world into this fourth world. At that time, monsters roamed the land and killed many people. Since Spider Woman loved the people, she gave power for Monster- Slayer and Child-Born-of-Water to search for the Sun-God who was their father. When they found him, Sun-God showed them how to destroy all the monsters on land and in the water. Because she preserved their people, Dine (Navajo) established Spider Woman among their most important and honoured Deities.

She chose the top of Spider Rock for her home. It was Spider Woman who taught Dine (Navajo) ancestors of long ago the art of weaving upon a loom. She told them, "My husband, Spider Man, constructed the weaving loom making the cross poles of sky and earth cords to support the structure; the warp sticks of sun rays, lengthwise to cross the woof; the healds of rock crystal and sheet lightning, to maintain original condition of fibres. For the batten, he chose a sun halo to seal joints, and for the comb he chose a white shell to clean strands in a combing manner." Through many generations, the Dine (Navajo) have always been accomplished weavers.

One day, a peaceful cave-dwelling Dine (Navajo) youth was hunting in Dead Man's Canyon, a branch of Canyon de Chelly. Suddenly, he saw an enemy tribesman who chased him deeper into the canyon. As the peaceful Dine (Navajo) ran, he looked quickly from side to side, searching for a place to hide or to escape. Directly in front of him stood the giant obelisk-like Spider Rock. What could he do? He knew it was too difficult for him to climb. He was near exhaustion. Suddenly, before his eyes he saw a silken cord hanging down from the top of the rock tower.

The Dine (Navajo) youth grasped the magic cord. which seemed strong enough, and quickly tied it around his waist. With its help he climbed the tall tower, escaping from his enemy who then gave up the chase. When the peaceful Dine (Navajo) reached the top, he stretched out to rest. There he discovered a most pleasant place with eagle's eggs to eat and the night's dew to drink.

Later, when the peaceful Dine (Navajo) youth felt assured his enemy was gone, he thanked Spider Woman warmly and he safely descended to the canyon floor by using her magic cord. He ran home as fast as he could run, reporting to his tribe how his life was saved by Spider Woman!