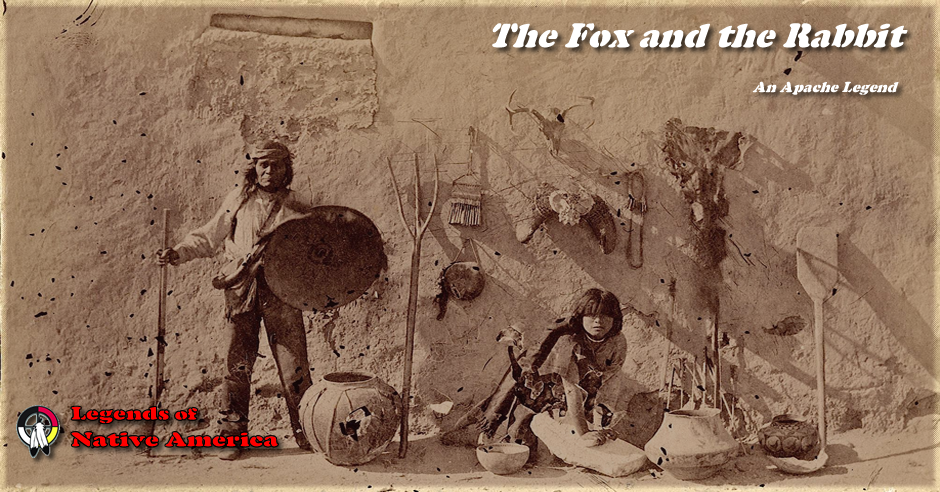 Fox one day met a Rabbit who was sewing a sack. "What do you intend to do with that sack?" asked he.

"I am making this coat to protect myself from being killed by the hard hail which we are going to have today," replied Rabbit.

"My friend, you know how to make them; give me this coat and make another for yourself."

Rabbit agreed to this, and Fox put on the sack over his head. Rabbit then hung him on a limb and pelted him with stones, while Fox, thinking it was hail striking him, endured the punishment as long as he could, but finally fell early dead from the tree, and looked out, to see no signs of hail, but discovered the Rabbit running away. Fox wished to avenge himself by killing Rabbit, and set off in pursuit of him.

When overtaken Rabbit was chewing soft gum with which to make spectacles. Fox's curiosity was stronger than his passion for revenge. "What are you making those for?" said he.

"It is going to be very hot, and I am making them to protect my eyes," answered Rabbit.

"Let me have this pair; you know how to make them and can make yourself another pair."

"Very well," said Rabbit, and he put the eye-shields on Fox, who could then see nothing, as the gum was soft and filled his eyes.

Rabbit set fire to the brush all around Fox, who was badly singed in running through it. The gum melted in the fire, and yet remains as the dark rings around his eyes. Fox again started on the trail of Rabbit, with the determination of eating him as soon as he saw him.

He found Rabbit sitting beside the opening of a beehive. "I am going to eat you," said Fox ; "you have tried to kill me."

"You must not kill me," replied Rabbit. "I am teaching these children," and he closed the opening of the hive, so that Fox could not see what was inside. Fox desired very much to see what was in the hive making such a noise. "If you wish to see, stay here and teach them while I rest. When it is dinner time, strike them with a club," said Rabbit, who then ran away.

Fox patiently awaited the dinner hour, and then struck the hive with such force that he broke into it. The bees poured out and stung him until he rolled in agony.

"When I see you again, I will kill you before you can say a word!" declared he, as he started after Rabbit again.

Fox tracked the Rabbit to a small hole in the fence around a field of watermelons belonging to a Mexican. The Rabbit had entered to steal, and was angered at sight of the gum figure of a man which the owner of the field had placed beside the path.

"What do you desire from me?" he cried, as he struck at the figure with his forefoot, which stuck fast in the soft gum. He struck at the gum with every foot, and even his head was soon stuck in the gum. Thus Fox found him. "What are you doing here?" he asked.

"They put me in here because I would not eat chicken for them," said Rabbit.

The Mexican found him in the morning and skinned him, and then let him go, -- still on the trail of the Rabbit who had so frequently outwitted him.