The Girl Who Married the Moon 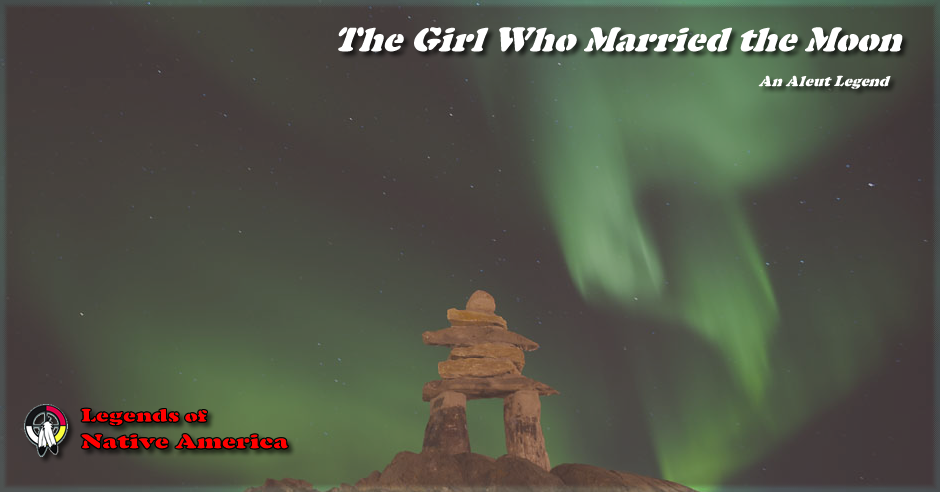 Long ago there were two girl cousins who lived in a large tribal village. Those evenings when the moon was out, they liked to go to the beach and play. Claiming the moon as their husband, they spend the night gazing and making love to the man in the moon.

For shelter they had propped up a bidarka (large skin boat), and during the night they changed positions several times, so they could always face the moon. In the morning, upon returning home, their parents always questioned them about their whereabouts. The girls told them how they had watched the moon until it passed from sight. Many of their family heard them tell how much they loved the moon, always wishing they were moons.

One evening, with other young people of their tribe, they amused themselves on the beach. Night came and the others returned to their homes, but the two girls remained. When the moon went away out of their sight, one complained, "Why does the moon hide so suddenly? I like to play with him and enjoy his moonlight." "I, too," said the other. It was not yet midnight, and the moon was already behind the clouds.

Up to now they had not noticed how dishevelled their appearance was from playing. They became startled when they heard the voice of a young man as he approached them. "You have been professing your love for me," he said. "I have observed you and know you love me, therefore, I have come for you. But since my work is very hard, I can only take one of you--the more patient one."

Each begged to be chosen. He said, "I have decided to take both of you. Now close your eyes and keep them closed." So he grabbed each by the hair, and the next moment they were rushing through the air. The patience of one wore thin. As she opened her eyes, she felt herself drop down, down, down, leaving her hair behind in his hands. She found herself beside the bidarka where she had left it.

The patient cousin kept her eyes closed the entire time, and in the morning found herself in a comfortable barrabara, the home of the moon. There she lived as the wife of the moon, happy in loving him. Generally he slept during the day, as he worked all night.

Frequently he went away in the morning and returned in the evening. Sometimes he was gone from mid-day until midnight. His irregular schedule puzzled his wife. But he never offered an explanation to her of what he did in his absence.

His silence and indifference piqued the young bride. She waited as long as she could, until one day she said, "You go out every day, every evening, every night, and you never tell me what you do. What kinds of people do you associate with, while I am left behind?"

"I am not with other people, for there are not my kind of people here," he said. "I have important work to do, and I cannot be with you all the time."

"If your work is so hard, can you take me with you to help you sometimes?" she asked.

"My work is too hard for you," he replied. "I brought you up here, because I had no rest when you were down there. You and your lovely cousin were constantly staring at me and teasing me. Now stop your foolishness, you cannot help me. Stay home and be happy for me when I do return."

"Surely, you don't expect me to stay home all the time." She began to weep. "If I cannot go with you, can I go out by myself occasionally?"

"Of course, go anywhere you like, except in the two homes you see yonder. In the corner of each there is a curtain, under which you must never look." After this warning, he left his barrabara, and that night he looked paler than usual.

Later, she went out for a walk. Although she went far and in different directions, she saw no people. She tried several short trails, and on each saw a man lying face down. It gave her pleasure to kick them to disturb them. Each would turn and look at her with his one bright, sparkling eye and cry out, "Why do that to me? I am working and busy." She kicked all of them until she tired and ran home.

On her way she saw the two forbidden barrabaras, and she just had to look inside. A curtain hid a corner in the first. She couldn't resist the desire to look under the curtain. There she beheld a half-moon, a quarter-moon, and a small piece of moon. In the second barrabara, she found a full moon, one almost full, and another more than half-full.

Thinking about the beautiful pieces, she decided it would be such fun and no harm to try on one to see how she would feel. The one almost full pleased her most, so she placed it on one side of her face and there it stuck. She cried, "Ai, Ai, Y-a-h, Ai, Ai, Yah!" She tugged and pulled but the moon would not come off. For fear her husband would soon arrive, she hastened home, threw herself on the bed, and covered that side of her face.

There he found her, complaining that her face pained her. He suspected the real cause and went out to investigate. Upon his return he asked her about the missing moon. "Yes," she admitted. "I tried it on for fun, and now I cannot take it off." He laughed and laughed at her. Gently he pulled it off for her.

Seeing his good humour, she told him of her eventful day, especially the sport she had with the one-eyed people scattered about the sky.

"They are stars," he said reprovingly. "Since of your own free will you put on this moon, you can wear it from now on and help me in my hard work. I will finish my rounds with the full moon, and after that you can start in and finish out the month while I rest."

To this happy arrangement she consented gladly. Since that time the two have shared the hard work between them--the man in the moon and his lady in the moon.