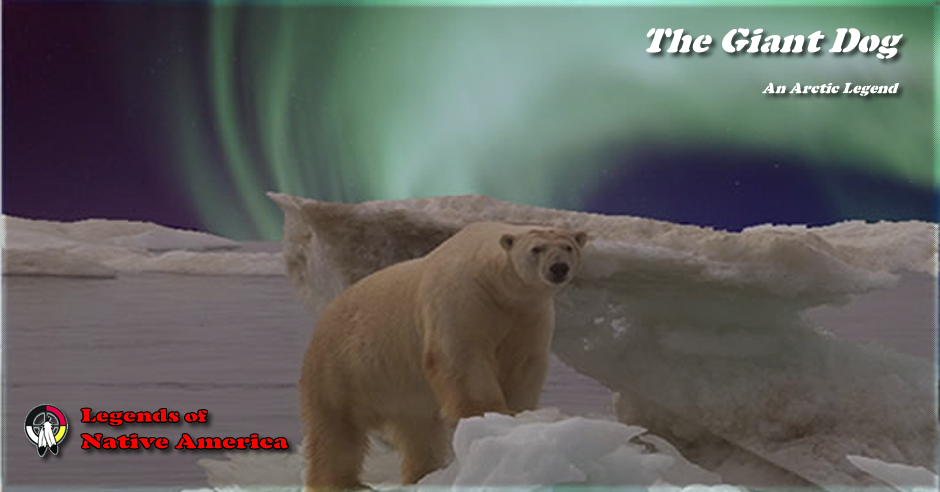 THERE was once a man who had a giant dog. It could swim in the sea, and was so big that it could haul whale and narwhal to shore. The narwhal it would hook on to its side teeth, and swim with them hanging there.

The man who owned it had cut holes in its jaws, and let in thongs through those holes, so that he could make it turn to either side by pulling at the thongs. And when he and his wife desired to go journeying to any place, they had only to mount on its back. The man had long wished to have a son, but as none was born to him, he gave his great dog the amulet which his son should have had. This amulet was a knot of hard wood, and the dog was thus made hard to resist the coming of death.

Once the dog ate a man, and then the owner of the dog was forced to leave that place and take land elsewhere. And while he was living in this new place, there came one day a kayak rowing in towards the land, and the man hastened to take up his dog, lest it should eat the stranger. He led it away far up into the hills, and gave it a great bone, that it might have something to gnaw at, and thus be kept busy.

But one day the dog smelt out the stranger, and came down from the hills, and then the man was forced to hide away the stranger and his kayak in a far place, lest the dog should tear them in pieces, for it was very fierce.

Now because the dog was so big and fierce, the man had many enemies. And once a stranger came driving in a sledge with three dogs as big as bears, to kill the giant dog. The man went out to meet that sledge, and the dog followed behind him. The dog pretended to be afraid at first, but then, when the stranger's dog set upon it in attack, it turned against them, and crushed the skulls of all three in its teeth.

After a time, the man noticed that his giant dog would go off, now and again, for long journeys in the hills, and would sometimes return with the leg of an inland-dweller. And now he understood that the dog had made it a custom to attack the inland-dwellers and bring back their legs to its master. He could see that the legs were legs of inland-dwellers, for they wore hairy boots.

And it is from this giant dog that the inland-dwellers got their great fear of all dogs. It would always appear suddenly at the window, and drag them out. But it was a good thing that something happened to frighten the inland-dwellers, for they had themselves an evil custom of carrying off lonely folk, especially women, when they had lost their way in the fog.

And that is all I know about the Giant Dog.