The Woman and her Bear 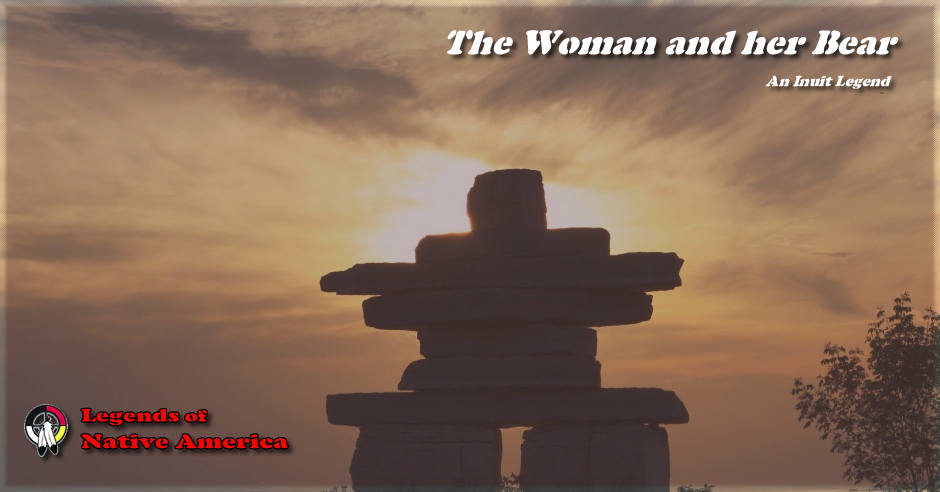 Long ago in the far north, there lived a village of people known as the Inuit. They lived on the shores of the icy Arctic, and they depended upon the bounty of the salmon and seal and the creatures of the snow to feed themselves. All the young men of the village were hunters and fishermen. One old woman lived alone She had no husband and no sons to hunt or fish for her, and though her neighbors shared their food with her, as was their custom, she was lonely. She longed for a family of her own. She often walked along the shore, looking far out to sea, praying that the gods might send her a son.

One cold winter day, the woman was walking by the sea when she spotted a tiny white polar bear sitting all alone on the thick ice. At once she felt a kinship toward him, for he looked as lonely as she. His mother was nowhere in sight. "Someone must have killed her," she said softly, and she walked onto the ice, picked up the cub and looked into his eyes. "You will be my son," she said. She called him Kunik.

The old woman took her cub back to her home. From that day on, she shared all of her food with Kunik, and a strong bond grew between the two.

The village children loved Kunik, too. Now the woman was never lonely, for her son, the bear, and all the village children kept her company all day. She would stand by her igloo and smile as Kunik and the children rolled in the snow and slid on the ice. Kunik was gentle with the children as if they were his brothers and sisters.

Kunik grew taller and smarter. The children taught him to fish. By springtime he was fishing on his own, and every afternoon he came home carrying fresh salmon for his mother, The old woman was now the happiest of all the villagers. She had plenty of food and a son she loved with all her heart. She was so proud of her little bear that whenever he returned home, she would say proudly to anyone nearby," He's the finest fisherman in all the village!"

Before long the men began to whisper among themselves. They knew the bear was the most skillful fisherman of the village. They began to feel envious. "What will we do?" they asked each other. "That bear brings home the fattest seals and the biggest salmon." "He must be stopped," one of the men said. "He puts us to shame." They all turned and looked at him. They nodded slowly for although they were envious , they knew how much the old woman loved the bear. "We'll have to kill him. He has grown far too big," one man said. One by one the others agreed, for their envy made them stupid and mean. "Yes" the others said. "He is a danger to our families."

A little boy overheard the men talking. He ran to the old woman's home to tell her of the terrible plan. When the old woman heard the news, she threw her arms around her bear and wept. "No," she said, "they must not kill my child." At once she set off to visit every house in the village. She begged each man not to kill her beautiful bear. "Kill me instead," she wept. "He is my child. I love him dearly."

"He is fat," some of the village men said. "He will make a great feast for the whole village." "He is a danger to our children," the others said. "We cannot let him live."

The old woman saw that the men was determined to kill her son. She rushed home and sat down beside him. "Your life is in danger, Kunik. You must run away. Run away and do not return, my child." she wept as she spoke and held him close. "Run away. but do not go so far that I cannot find you," she whispered. And though her heart was breaking, she sent Kunik away. He had tears in his eyes, but he obeyed his mother's wishes.

For many days the old woman and the children grieved their loss. And then one day the old woman rose at dawn and was determined to find Kunik. She walked and walked , calling out his name. After many hours, just as the old woman feared she would never find him, she saw her bear running toward her. He was fat and strong, and his coat was shimmering white. They embraced, and the old woman whispered, "I love you."

But Kunik could see that his mother was hungry, and so he ran to get her fresh meat and fish. With tears in her eyes, the old woman cut up the seal and gave her son the choicest slices of blubber. Promising to return the next day, she set off for home, carrying her meat, her heart filled with joy.

The next day, as she had promised, she went to visit her son. And every day after that, the old woman and her son met, and the bear brought his mother fresh meat and fish.