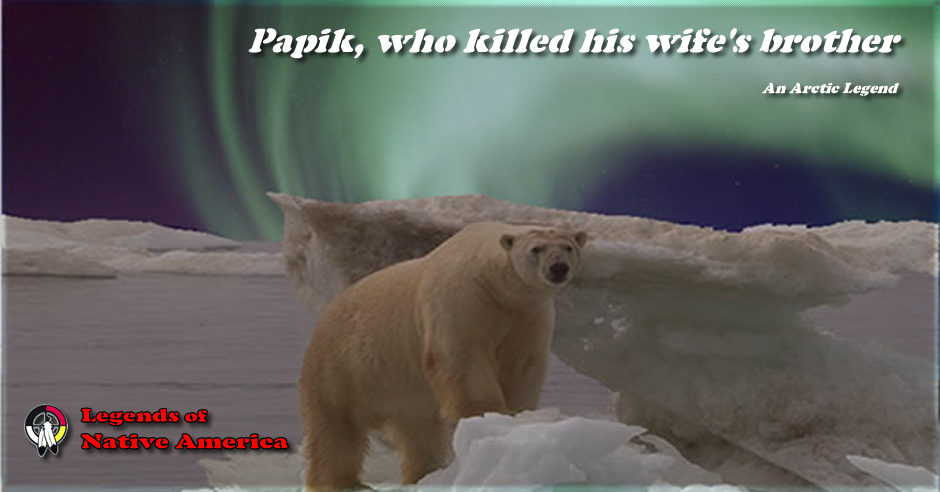 THERE was once a man whose name was Papik, and it was his custom to go out hunting with his wife's brother, whose name was Ailaq. But whenever those two went out hunting together, it was always Ailaq who came home with seal in tow, while Papik returned empty-handed. And day by day his envy grew.

Then one day it happened that Ailaq did not return at all. And Papik was silent at his home-coming. At last, late in the evening, that old woman who was Ailaq's mother began to speak.

"No, I did not kill him," answered Papik.

Then the old woman rose up and cried:

"You killed him, and said no word. The day shall yet come when I will eat you alive, for you killed Ailaq, you and no other."

And now the old woman made ready to die. for it was as a ghost she thought to avenge her son. She took her bearskin coverlet over her, and went and sat down on the shore, close to the water, and let the tide come up and cover her. For a long time after this, Papik did not go out hunting at all, so greatly did he fear the old woman's threat. But at last he ceased to think of the matter, and began to go out hunting as before.

One day two men stood out on the ice by the breathing holes. Papik had chosen his place a little farther off, and stood there alone. And then it came. They heard the snow creaking, with the sound of a cry, and the sound moved towards Papik, and a fog came down over the ice. And soon they heard shouts as of one in a fury, and the screaming of one in fear; the monster had fallen upon Papik, to devour him.

And now they fled in towards land, swerving wide to keep away from what was happening there. On their way, they met sledges with hunters setting out; they threw down their gear, and urged the others to return to their own place at once, lest they also should be slain by fear.

When they reached their village, all gathered together in one house. But soon they heard the monster coming nearer over the ice, and then all hurried to the entrance, and crowding together, grew yet more greatly stricken with fear. And pressing thus against each other, they struggled so hard that one fatherless boy was thrust aside and fell into a tub full of blood. When he got up, the blood poured from his clothes, and wherever they went, the snow was marked with blood.

"Now we are already made food for that monster," they cried, "since that wretched boy marks out the way with a trail of blood."

"Let us kill him, then," said one. But the others took pity on him, and let him live.

And now the evil spirit came in sight out on the ice; they could see the tips of its ears over the hummocks as it crept along. When it came up to the houses, not a dog barked, and none dared try to surround it, for it was not a real bear. But at last an old woman began crying to the dogs:

"See, there is your cousin—bark at him!" And now the dogs were loosed from the magic that bound them, and when the men saw this, they too dashed forward, and harpooned that thing.

But when they came to cut up the bear, they knew its skin for the old woman's coverlet, and its bones were human bones.

And now the sledges drove out to find the gear they had left behind, and they saw that everything was torn to pieces. And when they found Papik, he was cut about in every part. Eyes, nose and mouth and ears were hacked away, and the scalp torn from his head.

Thus that old woman took vengeance for the killing of her son Ailaq.

And so it was our fathers used to tell: when any man killed his fellow without good cause, a monster would come and strike him dead with fear, and leave no part whole in all his body.

The people of old times thought it an ill thing for men to kill each other.

This story I heard from the men who came to us from the far side of the great sea.