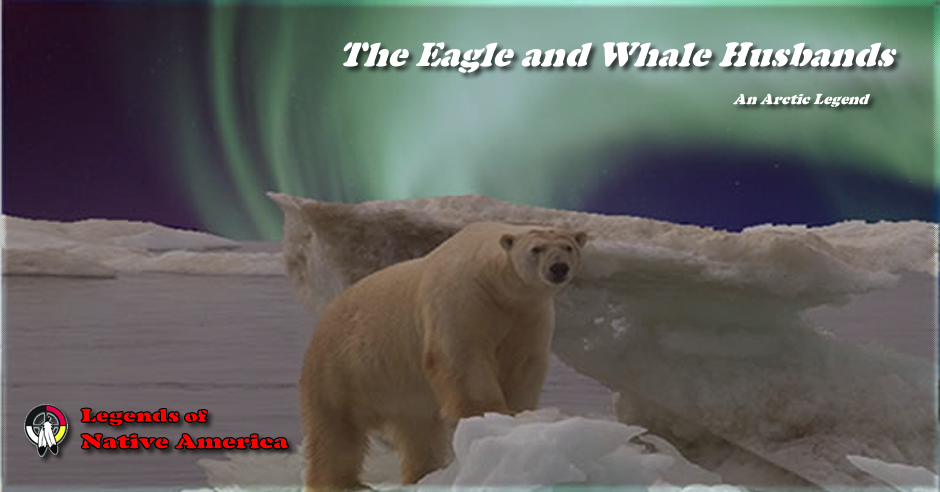 Two little girls were playing with some small bones on the beach; the one with eagle-bones, the other with whalebones. Suddenly an eagle came soaring through the air above them, and one of the girls said, "I will have an eagle for my husband"; and the other replied, "Thou may rejoice that thou hast already got a husband; I will have a whale for mine." Instantly a whale was seen to spout out at sea.

And the eagle took one girl up and flew away with her, and the whale took the other down to the bottom of the sea, having first made her eyes and ears impenetrable, so that the water could not enter. The eagle carried his bride to the top of a steep cliff, and brought her different sorts of little birds for food; but she gathered all the sinews of the birds' wings, and knotted them together, in order to make a string of them. One day, when the eagle was away, she tried the length of it, and found that it reached down to the level of the sea. Another day she saw a "kayaker" rowing along the shore; and when he came just below, she called out to him to send a boat to rescue her.

Soon afterwards the boat appeared, and she went sliding down by her string of sinews, and got back to her parents. But the eagle, who missed his mate, soared above the houses beating his wings; and one of the inhabitants of the place cried out to him, "If thou wants to show thou hast been married into our family, spread out thy wings"; but when the eagle did so they shot him through the body.

The other girl who had been stolen by the whale was secured to the bottom of the sea by a rope; and when he was at home, she had nothing to do but to sit picking the lice from off his body. She had two brothers living close by, and both set about building a boat of immense swiftness, in which they intended to deliver their sister; but when the boat was finished it could not match a bird in speed, and was therefore broken to pieces, and another begun. This boat proved a match for a flying bird, but was nevertheless discarded, and they again built a new one, in which they tried to overtake a gull; and on finding that this one even outdid the bird, they started from home to fetch back their sister. On becoming aware of their approach she loosened the cord that held her, and twisting it round the stone, she left with the boat.

When the whale on his return drew the cord to get hold of her, and discovered that she was gone, he hurried after her. But when he came quite close to the boat she threw her outer jacket into the water to him. Having snapped at it he let it go, and again pursued her; and when he had got quite close up with them, she flung her inner jacket at him, which again detained the whale; but he soon reached them for the third time. Then she threw her long jacket, and before he could overtake them again they had already landed; but when the whale reached the shore he was transformed into a piece of whalebone.