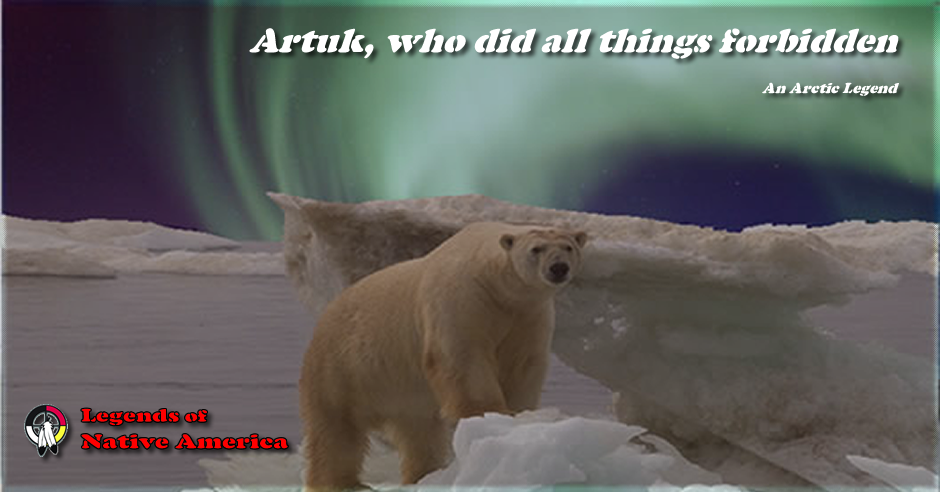 A MAN whose name was Artuk had buried his wife, but refused to remain aloof from doings which those who have been busied with the dead are forbidden to share. He said he did not hold by such old customs.

Some of his fellow-villagers were at work cutting up frozen meat for food. After watching them for a while as they worked at the meat with their knives, he took a stone axe and hacked at the meat, saying:

And this he did although it was forbidden.

And on the same day he went out on to the ice and took off his inner coat to shake it, and this he did although it was forbidden.

Also he went up on to an iceberg and drank water which the sun had melted there, knowing well that this was likewise forbidden.

And all these things he did in scorn of that which his fellows believed. For he said it was all lies.

But one day when he was starting out with his sledge, fear came upon him, and he dared not go alone. And as his son would not go with him willingly, he took him, and bound him to the uprights of the sledge, and carried him so.

Late in the evening, his daughter heard in the air the mocking laughter of two spirits. And she knew at once that they were laughing so that she might know how her father had been punished for his ill-doing.

On the following day, many sledges went out to search for Artuk. And they found him, far out on the ice, torn to pieces, as is the way with those whom the spirits have punished for refusing to observe the customs of their forefathers. And the son, who was bound to the sledge, had not been touched, but he had died of fright.