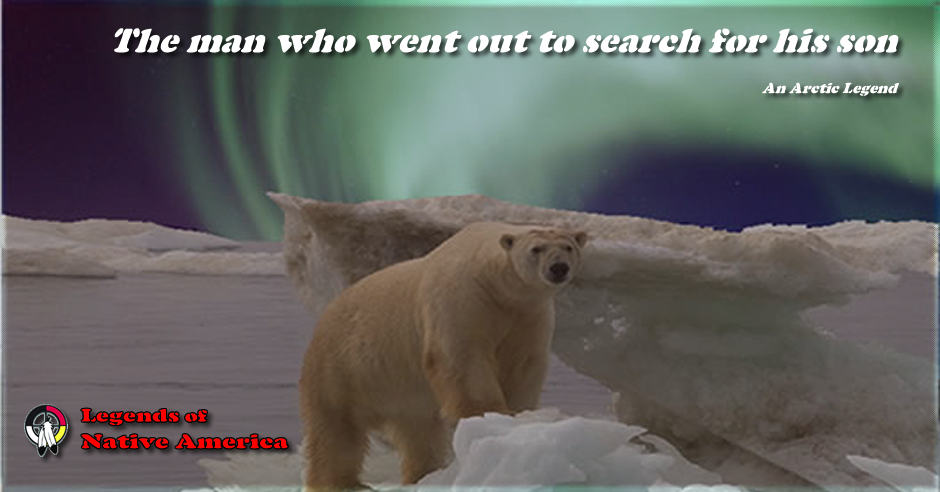 ONCE in the days, of our forefathers, a man went out along the coasts, making search for his son. For that son had gone out in his kayak and had not returned.

One day he saw a giant beside a great glacier, and rowed up to him then. When he had entered the house, the giant drew forth a drum, a beautiful drum with a skin that had been taken from the belly of a man. Now the giant was about to give him this drum, but at the same time he felt such a violent desire to eat him up, that he trembled all over.

Just then some great salmon began dropping down through a hole in the roof, and the man was so frightened at this that he could scarcely eat. And he could not get out of the place. But he was himself a great wizard, and now he began calling upon his helping spirits. And they were great.

"Killer whales, killer whales—come forth, my helping spirits and show yourselves, for here is one who desires to eat me up."

And they came forth, and the house was crushed and the giant was killed, and the man set out again in search of his own.

Then he met another big man, and this man did nothing but eat men, and their kayaks he threw down into a great ravine. The man rowed up to this giant. And when he reached him, the man-eater said: "Come here and look," and led him to the deep ravine. And when the man looked down, the giant tried to thrust him backwards down into the depth.

But the man caught hold of the giant's legs and cast him down instead. And then he went on again.

And as he was rowing on, he heard the bone of a seal calling to him: "Take away the moss which has stopped up the hole that goes through me." And he did so, and went on again.

Another time he heard a mussel at the bottom of the sea crying: "Here is a mussel that wishes to see you; come down to the bottom; row your kayak straight down through the water—this way!"

That mussel wanted to eat him. But he did not heed it. Then at last one day he saw an old woman, and rowed towards her, and came up to her. And she said:

"Let me dry your boots." And she took them and hung them up so high that he could not reach them. The man would have slept, but he could not sleep for fear.

"Give me my boots," he said. For it was now revealed that she was a man-eater. And so he got hold of his boots and fled down to his kayak, and the woman ran after him.

"If only I could catch him, and cut him up," she said. And as she spoke, the kayak nearly upset.

"If only I could send a bird dart through her," said the man. And as he spoke, the woman fell down on her back and broke her knife.

And then he rowed on his way. And on his way he met a man, and rowed up to him.

"See what a skin I have stretched out here," said the stranger. And he knew at once it was his son's kayak. The stranger had eaten his son, and there was his skin stretched out. The man therefore went up on land and trampled that man-eater to death, so that all his bones were crushed.

And then he went home again.