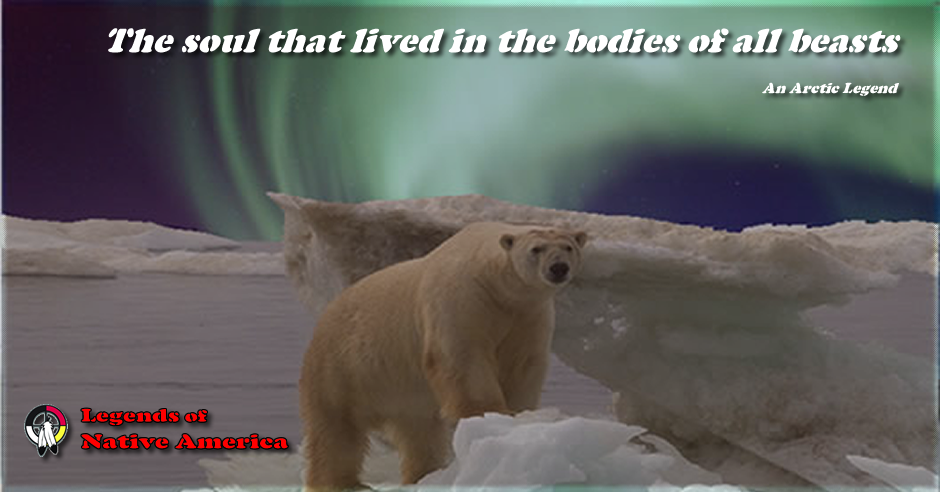 THERE was a man whose name was Avôvang. And of him it is said that nothing could wound him. And he lived at Kangerdlugssuaq.

At that time of the year when it is good to be out, and the days do not close with dark night, and all is nearing the great summer, Avôvang's brother stood one day on the ice near the breathing hole of a seal. And as he stood there, a sledge came dashing up, and as it reached him, the man who was in it said:

"There will come many sledges to kill your brother."

The brother now ran into the house to tell what he had heard. And then he ran up a steep rocky slope and hid away. The sledges drove up before the house, and Avôvang went out to meet them, but he took with him the skin of a dog's neck, which had been used to wrap him in when he was a child. And when then the men fell upon him, he simply placed that piece of skin on the ground and stood on it, and all his enemies could not wound him with their weapons, though they stabbed again and again.

At last he spoke, and said mockingly:

"All my body is now like a piece of knotty wood, with the scars of the wounds you gave me, and yet you could not bring about my death."

And as they could not wound him with their stabbing, they dragged him up to the top of a high cliff, thinking to cast him down. But each time they caught hold of him to cast him down, he changed himself into another man who was not their enemy. And at last they were forced to drive away, without having done what they wished.

It is also told of Avôvang, that he once desired to travel to the south, and to the people who lived in the south, to buy wood. This men were wont to do in the old days, but now it is no longer so.

And so they set off, many sledges together, going southward to buy wood. And having done what they wished, they set out for home. On the way, they had made a halt to look for the breathing holes of seal, and while the men had been thus employed, the women had gone on. Avôvang had taken a wife on that journey, from among the people of the south.

And while the men stood there looking for seal holes, all of them felt a great desire to possess Avôvang's wife, and therefore they tried to kill him. Qautaq stabbed him in the eyes, and the others caught hold of him and sent him sliding down through a breathing hole into the sea. When his wife saw this, she was angry, and taking the wood which they had brought from the south, she broke it all into small pieces. So angry was she at thus being made a widow. Then she went home, after having spoiled the men's wood. But the sledges drove on.

Suddenly a great seal came up ahead of them, right in their way, where the ice was thin and slippery. And the sledges drove straight at it, but many fell through and were drowned at that hunting. And a little after, they again saw something in their way. It was a fox, and they set off in chase, but driving at furious speed up a mountain of screw-ice, they were dashed down and killed. Only two men escaped, and they made their way onward and told what had come to the rest.

And it was the soul of Avôvang, whom nothing could wound, that had changed, first into a seal and then into a fox, and thus brought about the death of his enemies. And afterwards he made up his mind to let himself be born in the shape of every beast of earth, that he might one day tell his fellow-men the manner of their life.

At one time he was a dog, and lived on meat which he stole from the houses. When he was pressed for food, he would carefully watch the men about the houses, and eat anything they threw away. But Avôvang soon tired of being a dog, on account of the many beatings which fell to his lot in that life. And so he made up his mind to become a reindeer.

At first he found it far from easy, for he could not keep pace with the other reindeer when they ran.

"How do you stretch your hind legs at a gallop?" he asked one day.

"Kick out towards the farthest edge of the sky," they answered. And he did so, and then he was able to keep pace with them. But at first he did not know what he should eat, and therefore he asked the others.

"Eat moss and lichen," they said.

And he soon grew fat, with thick suet on his back. But one day the herd was attacked by a wolf, and all the reindeer dashed out into the sea, and there they met some kayaks in their flight, and one of the men killed Avôvang.

He cut him up, and laid the meat in a cairn of stones. And there he lay, and when the winter came, he longed for the men to come and bring him home. And glad was he one day to hear the stones rattling down, and when they commenced to eat him, and cracked the bones with pieces of rock to get at the marrow, Avôvang escaped and changed himself into a wolf.

And now he lived as a wolf, but here as before he found that he could not keep up with his comrades at a run. And they ate all the food, so that he got none.

"Kick up towards the sky," they told him. And then at once he was able to overtake all the reindeer, and thus get food. And later he became a walrus, but found himself unable to dive down to the bottom; all he could do was to swim straight ahead through the water.

"Take off as if from the middle of the sky; that is what we do when we dive to the bottom," said the others. And so he swung his hindquarters up to the sky, and down he went to the bottom. And his comrades taught him what to eat; mussels and little white stones.

Once also he was a raven. "The ravens never lack food," he said, "but they often feel cold about the feet."

Thus he lived the life of every beast on earth. And at last he became a seal again. And there he would lie under the ice, watching the men who came to catch him. And being a great wizard, he was able to hide himself away under the nail of a man's big toe.

But one day there came a man out hunting who had cut off the nail of his big toe. And that man harpooned him. Then they hauled him up on the ice and took him home.

Inside the house, they began cutting him up, and when the man cast the mittens to his wife, Avôvang went with them, and crept into the body of the woman. And after a time he was born again, and became once more a man.