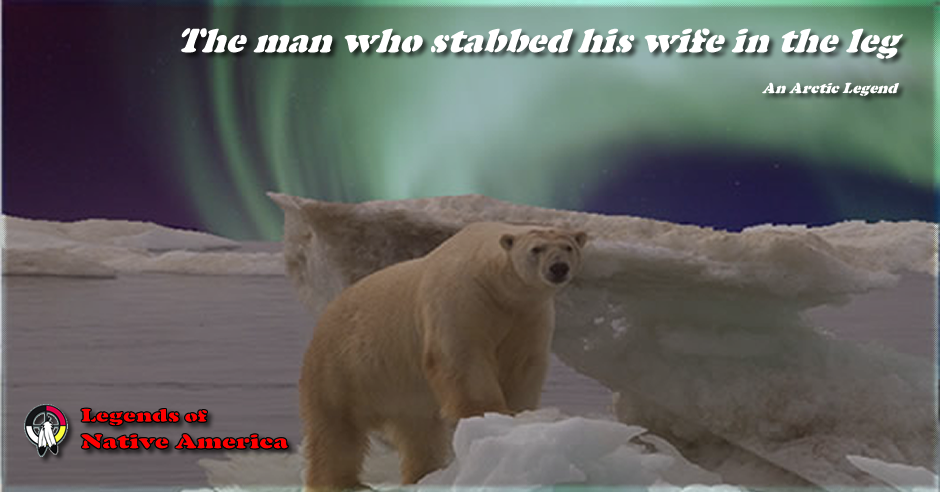 THERE was once a man whose name was Neruvkâq, and his wife was named Navaránâ, and she was of the tunerssuit, the inland-dwellers. She had many brothers, and was herself their only sister. And they lived at Natsivilik, the place where there is a great stone on which men lay out meat.

But Neruvkâq was cruel to his wife; he would stab her in the leg with an awl, and when the point reached her shinbone, she would snivel with pain.

"Do not touch me; I have many brothers," she said to her husband.

And as he did not cease from ill-treating her, she ran away to those brothers at last. And they were of the tunerssuit, the inland-dwellers.

Now all these many brothers moved down to Natsivilik, and when they reached the place, they sprang upon the roof of Neruvkâq's house and began to trample on it. One of them thrust his foot through the roof, and Neruvkâq's brother cut it off at the joint.

"He has cut off my leg," they heard him say. And then he hopped about on one leg until all the blood was gone from him and he died.

But Neruvkâq hastened to put on his tunic, and this was a tunic he had worn as a little child, and it had been made larger from time to time. Also it was covered with pieces of walrus tusk, sewn all about. None could kill him as long as he wore that.

And now he wanted to get out of the house. He put the sealskin coat on his dog, and thrust it out. Those outside thought it was Neruvkâq himself, and stabbed the dog to death.

Neruvkâq came close on the heels of the dog, and jumped up to the great stone that is used to set out meat on. So strongly did he jump that his footmarks are seen on the stone to this day. Then he took his arrows all barbed with walrus tusk, and began shooting his enemies down. His mother gave him strength by magic means.

Soon there were but few of his enemies left, and these fled away. They fled away to the southward, and fled and fled without stopping until they had gone a great way. But Navaránâ, who was now afraid of her husband, crept in under the bench and hid herself there. And as she would not come out again, her husband thrust in a great piece of walrus meat, and she chewed and gnawed at it to her heart's content.

"Come out, come out, for I will never hurt you any more," he said. But she had grown so afraid of him that she never came out any more, and so she died where she was at last—the old sneak!