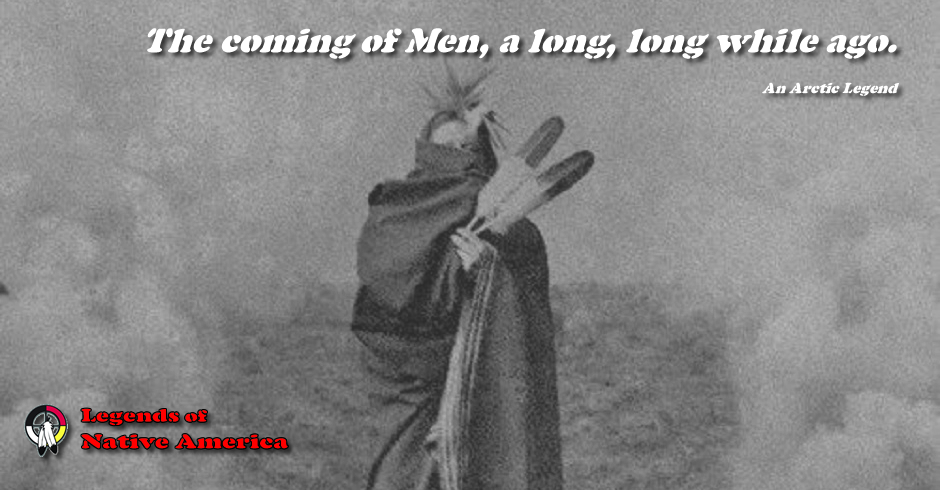 OUR forefathers have told us much of the coming of earth, and of men, and it was a long, long while ago. Those who lived long before our day, they did not know how to store their words in little black marks, as you do; they could only tell stories. And they told of many things, and therefore we are not without knowledge of these things, which we have heard told many and many a time, since we were little children. Old women do not to waste their words idly, and we believe what they say. Old age does not lie.

And then, when the earth was made, came men.

Then there is something about a man and a woman, but what of them? It is not clearly known. When did they find each other, and when had they grown up? I do not know. But the woman sewed, and made children's clothes, and wandered forth. And she found little children, and dressed them in the clothes, and brought them home.

And in this way men grew to be many.

And being now so many, they desired to have dogs. So a man went out with a dog leash in his hand, and began to stamp on the ground, crying "Hok—hok—hok!" Then the dogs came hurrying out from the hummocks, and shook themselves violently, for their coats were full of sand. Thus men found dogs.

But then children began to be born, and men grew to be very many on the earth. They knew nothing of death in those days, a long, long time ago, and grew to be very old. At last they could not walk, but went blind, and could not lie down.

Neither did they know the sun, but lived in the dark. No day ever dawned. Only inside their houses was there ever light, and they burned water in their lamps, for in those days water would burn.

But these men who did not know how to die, they grew to be too many, and crowded the earth. And then there came a mighty flood from the sea. Many were drowned, and men grew fewer. We can still see marks of that great flood, on the high hill-tops, where mussel shells may often be found.

And now that men had begun to be fewer, two old women began to speak thus:

"No; let us have both light and death," said the other.

And when the old woman had spoken these words, it was as she had wished. Light came, and death.

It is said, that when the first man died, others covered up the body with stones. But the body came back again, not knowing rightly bow to die. It stuck out its head from the bench, and tried to get up. But an old woman thrust it back, and said:

"We have much to carry, and our sledges are small."

For they were about to set out on a hunting journey. And so the dead one was forced to go back to the mound of stones.

And now, after men had got light on their earth, they were able to go on journeys, and to hunt, and no longer needed to eat of the earth. And with death came also the sun, moon and stars.

For when men die, they go up into the sky and become brightly shining things there.