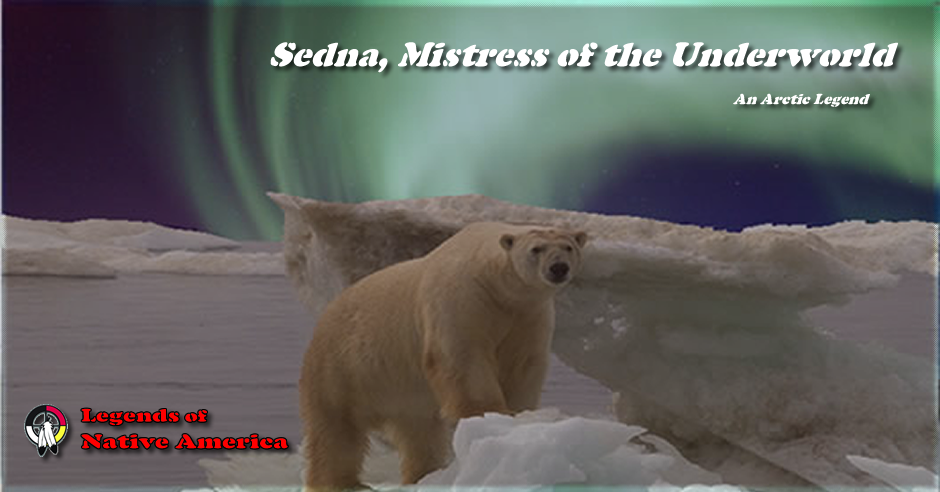 Once upon a time there lived on a solitary shore an Inung with his daughter Sedna. His wife had been dead for some time and the two led a quiet life.

Sedna grew up to be a handsome girl and the youths came from all around to sue for her hand, but none of them could touch her proud heart. Finally, at the breaking up of the ice in the spring a fulmar flew from over the ice and wooed Sedna with enticing song. "Come to me," it said; "come into the land of the birds, where there is never hunger, where my tent is made of the most beautiful skins. You shall rest on soft bearskins. My fellows, the fulmars, shall bring you all your heart may desire; their feathers shall clothe you; your lamp shall always be filled with oil, your pot with meat."

Sedna could not long resist such wooing and they went together over the vast sea. When at last they reached the country of the fulmar, after a long and hard journey, Sedna discovered that her spouse had shamefully deceived her. Her new home was not built of beautiful pelts, but was covered with wretched fishskins, full of holes, that gave free entrance to wind and snow. Instead of soft reindeer skins her bed was made of hard walrus hides and she had to live on miserable fish, which the birds brought her.

Too soon she discovered that she had thrown away her opportunities when in her foolish pride she had rejected the Inuit youth. In her woe she sang: "Aja. O father, if you knew how wretched I am you would come to me and we would hurry away in your boat over the waters.

The birds look unkindly upon me the stranger; cold winds roar about my bed; they give me but miserable food. O come and take me back home. Aja."

When a year had passed and the sea was again stirred by warmer winds, the father left his country to visit Sedna. His daughter greeted him joyfully and besought him to take her back home. The father, hearing of the outrages wrought upon his daughter, determined upon revenge. He killed the fulmar, took Sedna into his boat, and they quickly left the country which had brought so much sorrow to Sedna.

When the other fulmars came home and found their companion dead and his wife gone, they all flew away in search of the fugitives. They were very sad over the death of their poor murdered comrade and continue to mourn and cry until this day.

Having flown a short distance they discerned the boat and stirred up a heavy storm. The sea rose in immense waves that threatened the pair with destruction. In this mortal peril the father determined to offer Sedna to the birds and flung her overboard. She clung to the edge of the boat with a death grip. The cruel father then took a knife and cut off the first joints of her fingers.

Falling into the sea they were transformed into whales, the nails turning into whalebone. Sedna holding on to the boat more tightly, the second finger joints fell under the sharp knife and swam away as seals; when the father cut off the stumps of the fingers they became ground seals.

Meantime the storm subsided, for the fulmars thought Sedna was drowned. The father then allowed her to come into the boat again. But from that time she cherished a deadly hatred against him and swore bitter revenge.

After they got ashore, she called her dogs and let them gnaw off the feet and hands of her father while he was asleep.

Sedna, Mistress of the Underworld
An Eskimo Legend