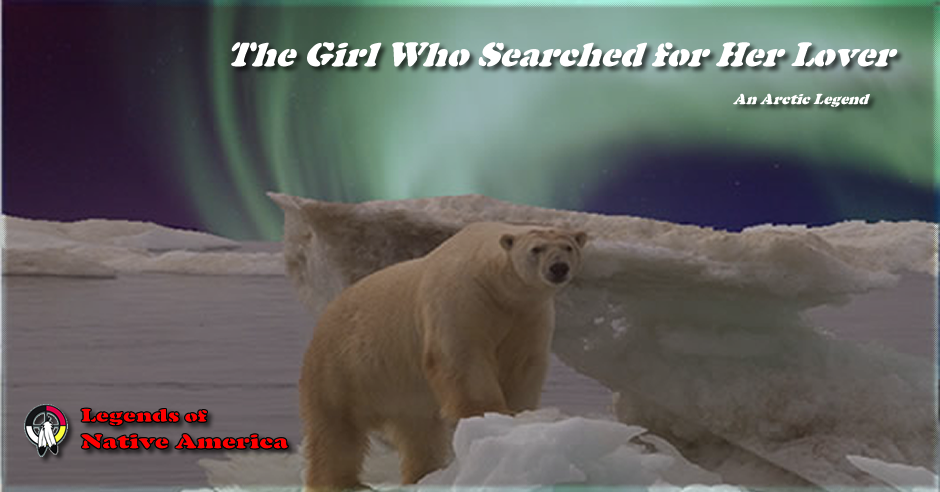 A terrible misfortune befell the people of a very large tribe. Of all the hunters that left the village, not one came back alive, nor was it known what had happened to them. In that tribe lived a beautiful young girl, who loved and was beloved by a brave hunter. She had joyfully consented to be his wife, but her parents objected.

The disappointed hunter had decided to drown his grief by going with the warriors to hunt. Older men cautioned against his hunting, but the young lover departed with the warriors. A month passed, but he did not return and was given up for lost by his tribe. Not so the young girl, who could not believe him dead. She felt she must go and search for him.

When she looked again, the kayak was going so fast that she became alarmed but could not change her course. Her speed increased by the moment, then she heard the mighty roar of waterfalls. Since life without her lover was not worth living, she closed her eyes to await her fate.

Very swiftly the boat rushed forward. The roaring waters became powerful. Her heart nearly stopped beating from fright when she felt herself going down, down, down, then come suddenly to a standstill.

She was not hurt, but could neither get out of the kayak nor move it. The boat was stuck fast. Dawn approached as she lay there, wondering what would become of her and what had happened to her lover. At sunrise, she saw a kayak coming toward her with one man paddling.

The man exclaimed aloud, "Ha! Ha! I have another victim," as he placed a bow and arrow beside him with a two-edged knife attached to the tip. But as he drew nearer, he put away his weapons, thinking, "That is a woman." Then he called out, "If you are a woman, speak up, and I will not kill you, for I never kill women." She assured him that she was a woman, and he came and helped her out of her boat and seated her in his kayak. He paddled off with her.

They reached his own barrabara where he lived alone. She noticed many human heads scattered about. One she recognized as her lover's. She said nothing, but to herself she pledged vengeance. The man asked her to be his wife, and ordered her to cook deer and seal meat for them to eat. At bedtime, he pointed to a corner for her to sleep, while he slept in an opposite corner. She obeyed without questioning him.

Next morning, he led her to a smaller barrabara and showed her a number of headless bodies. He said, "These I do not eat; but I have three sisters living some distance from here, who eat human flesh only. It is for them I have killed these people. Each day I take one body to a different sister." He then picked up a corpse and his bow and arrow and walked away.

The young girl followed him to the place where the road forked. One path led to the right, one led to the left, and one led straight ahead. She noticed which one he took, then returned to his barrabara, where she busied herself, removing two posts from one of the walls. She dug out an underground passage for escape.

All of the extra dirt she carried to the sea, then cunningly concealed the passage. Toward evening, she cooked a good supper for him when he returned, eating in silence, then they retired, each to their own corner.

From there she ran to the homes of the other two sisters, killing them, before running back to the barrabara. He found all three sisters dead and was suspicious.

She was sitting on the barrabara when he returned. "You killed my sisters, now I will kill you," he cried out angrily, rushing for his bow and arrow. They were not in their usual place and he discovered them in her hands. He begged her to give them to him, promising to do her no harm. At first she refused, but he pleaded and promised until she trusted him and gave them to him.

As soon as they were his again, he shouted, "Now you shall die," and shot at her. She suddenly dropped through the smoke hole, out of sight, before the arrow could reach her. While he looked for the arrow, she crawled out through the underground passage and perched herself anew on top of the barrabara.

Her disappearance and sudden reappearance was a mystery to him. he shot at her again and again, but she disappeared each time mysteriously. At least, since he could not kill her, he said, "Take this bow and arrow and kill me."

"I do not want to kill you," she told him. "But I'm afraid you will kill me someday."

He swore never to hurt her, and she came down from the roof. Together they ate their supper and retired in the usual manner. But as he was about to fall asleep, she moved closer to him and began talking to him, keeping him awake the entire night.

For five days and five nights she tormented him in this way, giving him no time to sleep. On the sixth day, in spite of all she could do, he fell into a deep, deep sleep. Although she pinched him and pulled at him, she could not arouse him. She brought a block of wood from outside and placed it under his neck. Then, with a knife she had stolen from one of his sisters, she beheaded him.

In his kayak, she put his bow, arrow, and knife, then seated herself and paddled homeward by way of the falls. But there were no falls, as they had existed only through the evil of that man. When he died, the river flowed smoothly and steadily in its own original channel. She found her kayak, which had drifted onto the beach, and she tied it to his and paddled to her home.

Her people learned of her adventures and the evil man. The older men decreed his weapons be burned on the trash pile. Then the people rejoiced in the young girl's safe return and the safety of their tribe.