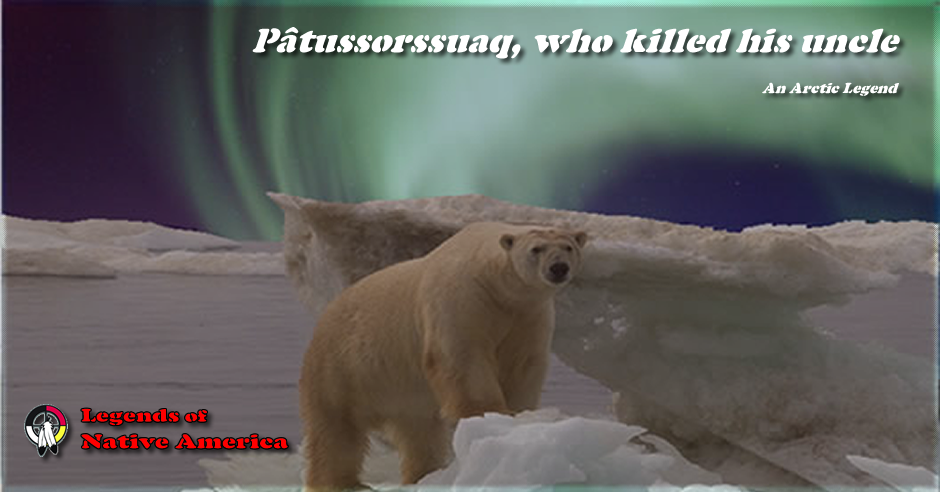 THERE lived a woman at Kûgkat, and she was very beautiful, and Alátaq was he who had her to wife. And at the same place lived Pâtussorssuaq, and Alátaq was his uncle. He also had a wife, but was yet fonder of his uncle's wife than of his own.

But one day in the spring, Alátaq was going out on a long hunting journey, and made up his mind to take his wife with him. They were standing at the edge of the ice, ready to start, when Pâtussorssuaq came down to them.

"Are you going away?" he asked.

"Yes, both of us," answered Alátaq.

But when Pâtussorssuaq heard thus, he fell upon his uncle and killed him at once, for he could not bear to see the woman go away.

When Pâtussorssuaq's wife saw this, she snatched up her needle and sewing ring, and fled away, following the shadow of the tent, over the hills to the place where her parents lived. She had not even time to put on her skin stockings, and therefore her feet grew sore with treading the hills. On her way up inland she saw people running about with their hoods loose on their heads, as is the manner of the inland folk, but she had no dealings with them, for they fled away.

Then, coming near at last to her own place, she saw an old man, and running up, she found it was her father, who was out in search of birds. And the two went gladly back to his tent.

Now when Pâtussorssuaq had killed his uncle, he at once went up to his own tent, thinking to kill his own wife, for he was already weary of her. But she had fled away.

Inside the tent sat a boy, and Pâtussorssuaq fell upon him, crying: "Where is she? Where is she gone?"

"I have seen nothing, for I was asleep," cried the boy, speaking falsely because of his great fear. And so Pâtussorssuaq was forced to desist from seeking out his wife.

And now he went down and took Alátaq's wife and lived with her. But after a little time, she died. And thus he had but little joy of the woman he had won by misdeed. And he himself was soon to suffer in another way.

At the beginning of the summer, many people were gathered at Natsivilik, and among them was Pâtussorssuaq. One day a strange thing happened to him, while he was out hunting: a fox snapped at the fringe of his coat, and he, thinking it to be but a common fox, struck out at it, but did not hit. And afterwards it was revealed that this was the soul of dead Alátaq, playing with him a little before killing him outright. For Alátaq's amulet was a fox.

And a little time after, he was bitten to death by the ghost of Alátaq, coming upon him in the shape of a bear. His daughter, who was outside at that time, heard the cries, and went in to tell of what she had heard, but just as she came into the house, behold, she had quite forgotten all that she wished to say. And this was because that vengeful spirit had by magic means called down forgetfulness upon her.

Afterwards she remembered it, but then it was too late. They found Pâtussorssuaq torn to pieces, torn limb from limb; he had tried to defend himself with great pieces of ice, as they could see, but all in vain.

Thus punishment falls upon the man who kills.