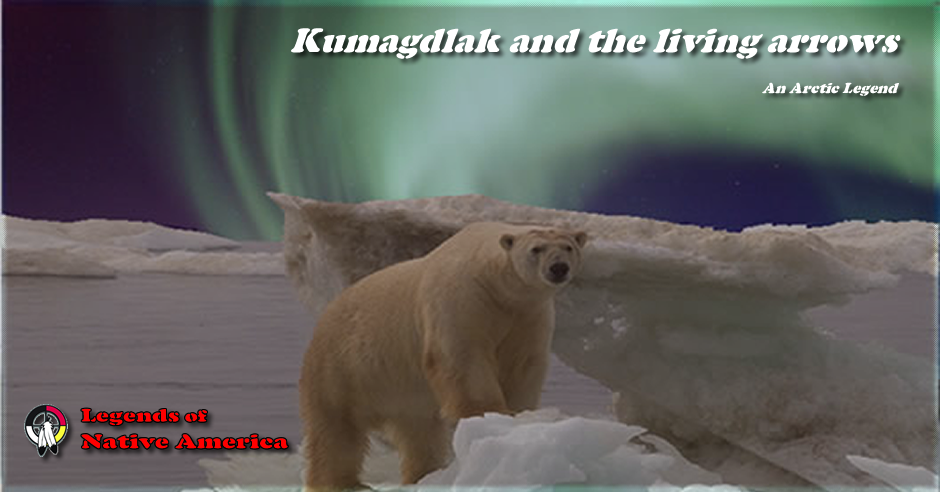 KUMAGDLAK, men say, lived apart from his fellows. He had a wife, and she was the only living being in the place beside himself.

One day his wife was out looking for stones to build a fireplace, and looking out over the sea, she saw many enemies approaching.

"An umiak and kayaks," she cried to her husband. And he was ill at ease on hearing this, for he lay in the house with a bad leg.

"My arrows—bring my arrows!" he cried. And his wife saw that all his arrows lay there trembling. And that was because their points were made of the shinbones of men. And they trembled because their master was ill at ease.

Kumagdlak had made himself arrows, and feathered them with birds' feathers. He was a great wizard, and by breathing with his own breath upon those arrows he could give them life, and cause them to fly towards his enemies and kill them. And when he himself stood unprotected before the weapons of his enemies, he would grasp the thong of the pouch in which his mother had carried him as a child, and strike out with it, and then all arrows aimed at him would fly wide of their mark.

Now all the enemies hauled up on shore, and the eldest among them cried out:

"Kumagdlak! It is time for you to go out and taste the water in the land of the dead under the earth—or perhaps you will go up into the sky?"

"That fate is more likely to be yours," answered Kumagdlak.

And standing at the entrance to his tent, he aimed at them with his bow. If but the first arrow could be sent whirling over the boats, then he knew that none of them would be able to harm him. He shot his arrow, and it flew over the boats. Then he aimed at the old man who had spoken, and that arrow cut through the string of the old man's bow, and pierced the old man himself. Then he began shooting down the others, his wife handing him the arrows as he shot. The men from the boats shot at him, but all their arrows flew wide. And his enemies grew fewer and fewer, and at last they fled. And now Kumagdlak took all the bodies down by the shore and plundered them, taking their knives, and when the boats had got well out to sea, he called up a great storm, so that all the others perished.

But the waves washed the bodies this way and that along the coast, until the clothes were worn off them.