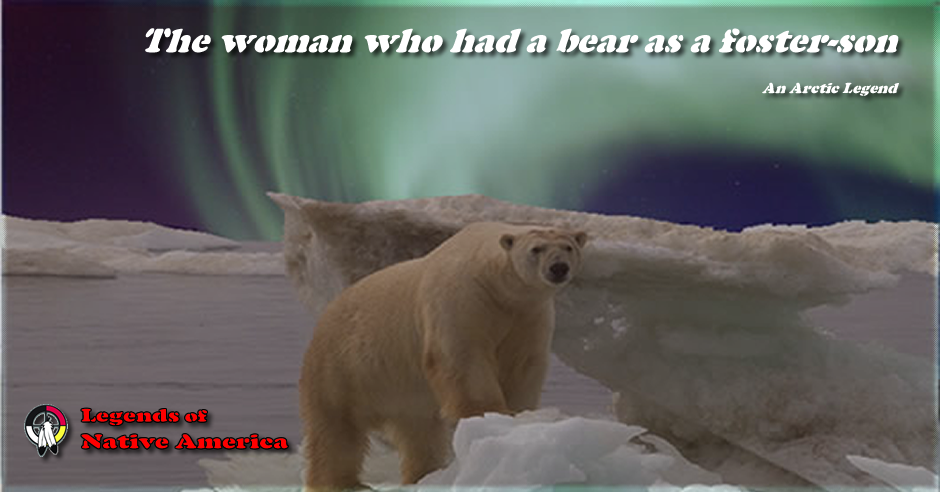 THERE was once an old woman living in a place where others lived. She lived nearest the shore, and when those who lived in houses up above had been out hunting, they gave her both meat and blubber.

And once they were out hunting as usual, and now and again they got a bear, so that they frequently ate bear's meat. And they came home with a whole bear. The old woman received a piece from the ribs as her share, and took it home to her house. After she had come home to her house, the wife of the man who had killed the bear came to the window and said:

"Dear little old woman in there, would you like to have a bear's cub?"

And the old woman went and fetched it, and brought it into her house, shifted her lamp, and placed the cub, because it was frozen, up on to the drying frame to thaw. Suddenly she noticed that it moved a little, and took it down to warm it. Then she roasted some blubber, for she had heard that bears lived on blubber, and in this way she fed it from that time onwards, giving it greaves to eat and melted blubber to drink, and it lay beside her at night.

And after it had begun to lie beside her at night it grew very fast, and she began to talk to it in human speech, and thus it gained the mind of a human being, and when it wished to ask its foster-mother for food, it would sniff.

The old woman now no longer suffered want, and those living near brought her food for the cub. The children came sometimes to play with it, but then the old woman would say:

"Little bear, remember to sheathe your claws when you play with them."

In the morning, the children would come to the window and call in:

"Little bear, come out and play with us, for now we are going to play."

And when they went out to play together, it would break the children's toy harpoons to pieces, but whenever it wanted to give any one of the children a push, it would always sheathe its claws. But at last it grew so strong, that it nearly always made the children cry. And when it had grown so strong the grown-up people began to play with it, and they helped the old woman in this way, in making the bear grow stronger. But after a time not even grown men dared play with it, so great was its strength, and then they said to one another:

"Let us take it with us when we go out hunting. It may help us to find seal."

And so one day in the dawn, they came to the old woman's window and cried:

"Little bear, come and earn a share of our catch; come out hunting with us, bear."

But before the bear went out, it sniffed at the old woman. And then it went out with the men.

On the way, one of the men said:

"Little bear, you must keep down wind, for if you do not so, the game will scent you, and take fright."

One day when they had been out hunting and were returning home, they called in to the old woman:

"It was very nearly killed by the hunters from the northward; we hardly managed to save it alive. Give therefore some mark by which it may be known; a broad collar of plaited sinews about its neck."

And so the old foster-mother made a mark for it to wear; a collar of plaited sinews, as broad as a harpoon line.

And after that it never failed to catch seal, and was stronger even than the strongest of hunters, and never stayed at home even in the worst of all weather. Also it was not bigger than an ordinary bear. All the people in the other villages knew it now, and although they sometimes came near to catching it, they would always let it go as soon as they saw its collar.

But now the people from beyond Angmagssalik heard that there was a bear which could not be caught, and then one of them said:

But the others said:

"You must not do that; the bear's foster-mother could ill manage without its help. If you see it, do not harm it, but leave it alone, as soon as you see its mark."

One day when the bear came home as usual from hunting, the old foster-mother said:

"Whenever you meet with men, treat them as if you were of one kin with them; never seek to harm them unless they first attack."

And it heard the foster-mother's words and did as she had said.

And thus the old foster-mother kept the bear with her. In the summer it went out hunting in the sea, and in winter on the ice, and the other hunters now learned to know its ways, and received shares of its catch.

Once during a storm the bear was away hunting as usual, and did not come home until evening. Then it sniffed at its foster-mother and sprang up on to the bench, where its place was on the southern side. Then the old foster-mother went out of the house, and found outside the body of a dead man, which the bear had hauled home. Then without going in again, the old woman went hurrying to the nearest house, and cried at the window:

"The little bear has come home with a dead man, one whom I do not know."

When it grew light, they went out and saw that it was the man from the north, and they could see he had been running fast, for he had drawn off his furs, and was in his underbreeches. Afterwards they heard that it was his comrades who had urged the bear to resistance, because he would not leave it alone.

A long time after this had happened, the old foster-mother said to the bear:

And she wept as she said this. But the bear thrust its muzzle right down to the floor and wept, so greatly did it grieve to go away from her.

After this, the foster-mother went out every morning as soon as dawn appeared, to look at the weather, and if there were but a cloud as big as one's hand in the sky, she said nothing.

But one morning when she went out, there was not even a cloud as big as a hand, and so she came in and said:

"Little bear, now you had better go; you have your own kin far away out there."

But when the bear was ready to set out, the old foster-mother, weeping very much, dipped her hands in oil and smeared them with soot, and stroked the bear's side as it took leave of her, but in such manner that it could not see what she was doing. The bear sniffed at her and went away. But the old foster-mother wept all through that day, and her fellows in the place mourned also for the loss of their bear.

But men say that far to the north, when many bears are abroad, there will sometimes come a bear as big as an iceberg, with a black spot on its side.