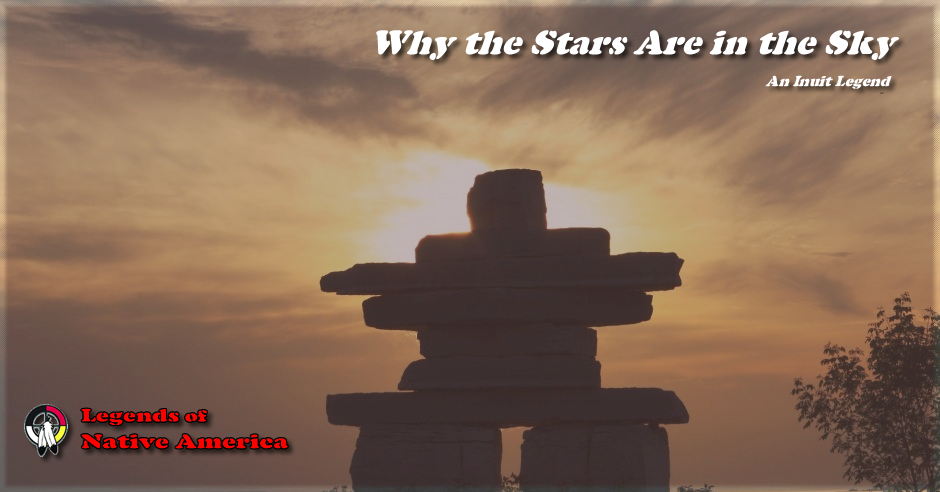 To the Eskimos the stars are not just put in the sky to give light or guide the wandering traveler. They are living things, sent by some twist of fate to roam the heavens forever, never swerving from their paths.

One of these creatures who left the earth and went to live in the sky was Nanuk the bear. One day Nanuk was waylaid by a pack of fierce Eskimo hunting dogs. Nanuk knew only too well that Eskimo dogs are not to be trifled with, and he tried to give them the slip. Faster and faster he ran over the ice, but the dogs were still at his heels. For hours the chase went on, yet he could not shake them off. In the fury and terror of the hunt, they had come very close to the edge of the world, but neither Nanuk or his pursuers noticed. When at last they reached it, they plunged straight over into the sky and turned into stars. The Europeans they are the Pleiades, in the constellation of Taurus the bull. But to this day Eskimos see them as Nanuk the bear, with the pack of savage dogs out for his blood.

Up in the sky directly overhead the Eskimos see a giant caribou, though we cll it the Great Bear. Over on the other side of the sky, they can make out some stars in the shape of an oil lamp. (We say it is the constellation of Cassiopeia.) On the horizon between then lamp and the caribou the Eskimos see stars like three steps carved out of the snow. They call it the stairway from Earth to the sky, but we talk of Orion the hunter.

Sometimes, on the darkest nights, the Eskimos' dead ancestors come out to dance. The stars are the lights round the dance floor. Then Gulla glows across the sky: the shimmering pattern of the Aurora Borealis, or Northern Lights. To the Norsemen it was Bifrost, the bridge from our world to Asgard, home of the gods.

But to the people of the Far North, the loveliest and most wonderful star of all is the sun. They see her as a young girl of dazzling beauty. In their brief Arctic summer she is there night and day, for this is the season of the midnight sun, when her brother Aningan, the moon, chases her round and round the North Pole so she cannot escape over the horizon.

Aningan the moon is a great hunter, and he chases animals as well as his sister the sun. He has a faithful pack of hunting dogs to help him. Sometimes his houdns are carried away by the joy of the hunt, and they jump over the edge of the sky and run down the stairway in orion to Earth. That is why there are shooting stars.

After hunting Aningan rests in his igloo, which he shares with his cousin Irdlirvirissong. His cousin loves jokes and games, and sometimes she comes out and dances in the sky. She is so funny that if the Eskimos see her they roar with laughter. But first they make sure none of their sorcerers or their other leaders are nearby, for if Irdlirvirissong knows that people are laughing at her she will be angry, and her punishments are terrible. She kills people who make fun of her, and eats them up.

The sorcerers are powerful, and ordinary Eskimos tremble before them, especially Angakog, the mightiest of all. Yet even Angakog's magic arts ar powerless against the planet Jupiter. For Jupiter is mother to the sun and the moon, and a constant peril to all sorcerers. They have to be very, very careful, or old mother Jupiter will open them up and devour their livers. Angakog trembles in fear of her, even as the ordinary folk tremble in fear of him.