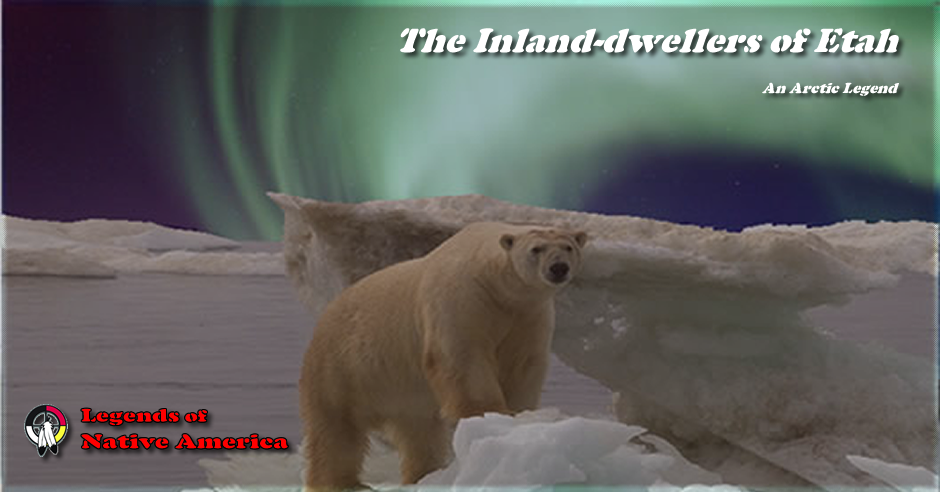 THERE came a sledge driving round to the east of Etah, up into the land, near the great lake. Suddenly the dogs scented something, and dashed off inland over a great plain. Then they checked, and sniffed at the ground. And now it was revealed that they were at the entrance to an inland-dweller's house.

The inland-dwellers screamed aloud with fear when they saw the dogs, and thrust out an old woman, but hurried in themselves to hide. The old woman died of fright when she saw the dogs.

Now the man went in, very ill at ease because he had caused the death of the old woman.

"It is a sad thing," he said, "that I should have caused you to lose that old one."

"It is nothing," answered the inland-dwellers; "her skin was already wrinkled; it does not matter at all."

Then the sledges drove home again, but the inland-dwellers were so terrified that they fled far up into the country. Since then they have never been seen. The remains of their houses were all that could be found, and when men dug to see if anything else might be there, they found nothing but a single narwhal tusk.

The inland-dwellers are not really dangerous, they are only shy, and very greatly afraid of dogs. There was a woman of the coast-folk, Suagaq, who took a husband from among the inland folk, and when that husband came to visit her brothers, the blood sprang from his eyes at sight of their dogs.

And they train themselves to become swift runners, that they may catch foxes. When an inland-dweller is to become a swift runner, they stuff him into the skin of a ribbon seal, which is filled with worms, leaving only his head free. Then the worms suck all his blood, and this, they say, makes him very light on his feet.

There are still some inland-dwellers left, but they are now gone very far up inland.