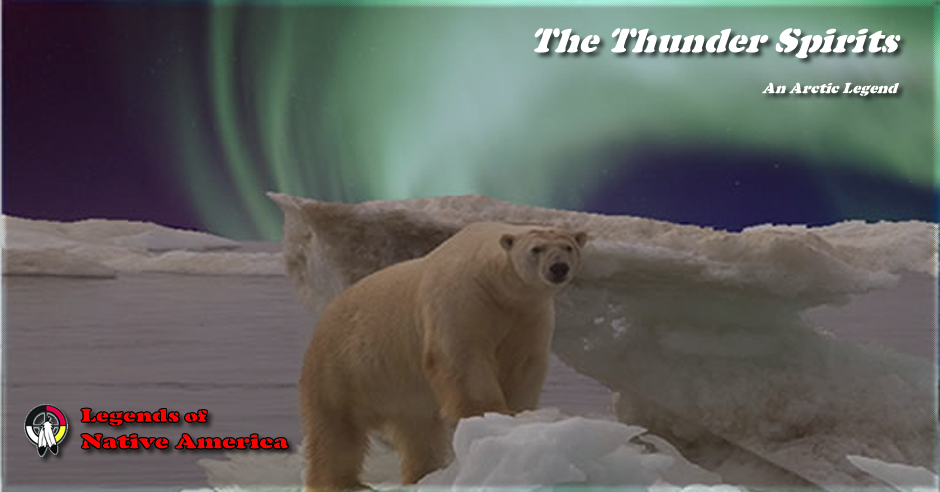 Two sisters, men say, were playing together, and their father could not bear to hear the noise they made, for he had but few children, and was thus not wont to hear any kind of noise. At last he began to scold them, and told them to go farther away with their playing.

When the girls grew up, and began to understand things, they desired to run away on account of their father's scolding. And at last they set out, taking with them only a little dogskin, and a piece of boot skin, and a fire stone. They went up into a high mountain to build themselves a house there.

Their father and mother made search for them in vain, for the girls kept hiding themselves; they had grown to be true mountain dwellers, keeping far from the places of men. Only the reindeer hunters saw them now and again, but the girls always refused to go back to their kin. And when at last the time came when they must die of hunger, they turned into evil spirits, and became thunder.

When they shake their dried boot skin, then the gales come up, the south-westerly gales. And great fire is seen in the heavens whenever they strike their fire stone, and the rain pours down whenever they shed tears.

Their father held many spirit callings, hoping to make them return. But this he ceased to do when he found that they were dead. But men say that after those girls had become spirits, they returned to the places of men, frightening many to death. They came first of all to their father and mother, because of the trouble they had made. The only one they did not kill was a woman bearing a child on her back. And they let her live, that she might tell how terrible they were. And tales are now told of how terrible they were.

When the thunder spirits come, even the earth itself is stricken with terror. And stones, even those which lie on level ground, and not on any slope at all, roll in fear towards men.

Thus the thunder comes with the south-westerly gales; there is a noise and crackling in the air, as of dry skins shaken, and the sky glows from time to time with the fire from their firestone. Great rocks, and everything which stands up high in the air, begin to glow.

When this happens, men use to take out a red dog, and cut its ear until the blood comes, and then lead the beast round about the house, letting the blood drip everywhere, for then the house will not take fire.

A red dog was the only thing they feared, those girls who were turned to thunder.