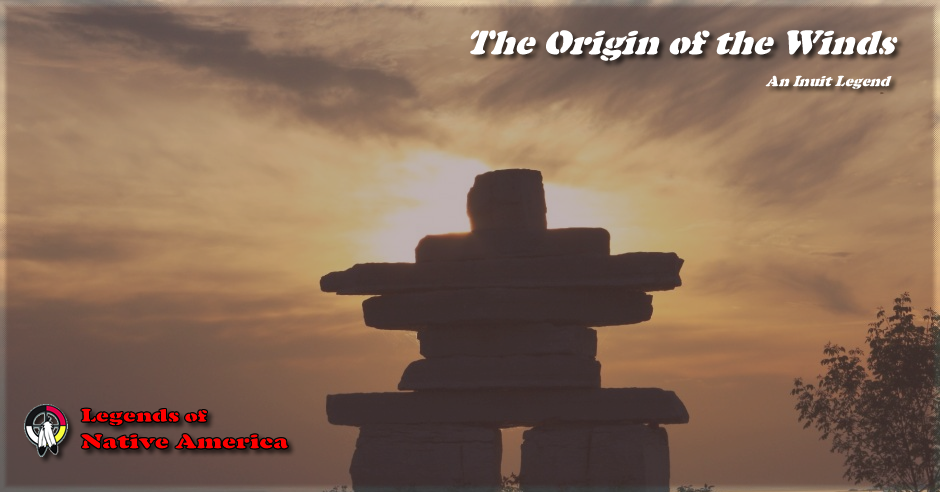 Long ago, when the world was still quite new, there were no winds at all, neither the gentle breeze of summer nor the fierce winter gale. Everything was perfectly still. Nothing disturbed the marsh grass on the shore and, when snow fell, it fell straight to earth instead of blowing and swirling into drifts as it does now.

At that time, in a village near the mouth of the Yukon River, there lived a couple who had no children. This made them very sad. Often the woman would sigh and say, 'How happy we would be if only we had a child!'

Her husband would sigh too and answer, 'Yes, if we had a son, I would teach him to stalk bears and seals over the ice-floes, and to make traps and snares. What will become of us in our old age with no one to provide for us ? Who will give festivals for our souls when we are dead ?'

These thoughts troubled them deeply and on many a long winter evening they sat in the flickering firelight, imagining how different life might be if they had a child.

One night the woman had a strange dream, in which she saw a sled pulled by three dogs, one brown, one white and one black, draw up outside her door. The driver leaned from his seat and beckoned her. 'Come,' he said. 'Sit here by me. I will take you on a journey.'

Wondering and fearful, the woman did as she was told. No sooner had she seated herself than the driver cracked his whip and the sled rose high into the air. Through the night-black sky they flew, faster and faster, past stars sparkling like hoar-frost. The woman was no longer afraid for she knew that this must be Igaluk, the Moon Spirit, who often comes to comfort those in distress.

Suddenly the sled stopped and the panting dogs lay down to rest. On all sides, as far as the eye could see, lay a great plain of smooth ice, the glittering expanse broken only by one small stunted tree.

Igaluk pointed and said, 'You who so desire a child, look at that tree over there. Make a doll from its trunk and you will find happiness.'

Before she could learn more, the woman awoke. So vivid was her dream that she at once roused her husband. She told him what she had seen and begged him to find the tree.

The man rubbed the sleep from his eyes. 'What would be the point?' he grumbled. 'It would only be a doll, not a real child.' But the woman persisted and finally, for the sake of peace, the man shouldered his axe and set out to look for the tree.

At the edge of the village where the snow lay thick and untrodden, he saw a bright path stretching far into the distance. It was now full day, yet the path shone like moonlight and the man knew that this was the direction which he must take.

For many hours he journeyed along the path of light until at last, on the horizon, he saw something shining very brightly. As he came nearer he saw that it was the tree of which his wife had spoken. The man cut it down with his axe and carried it home.

That evening, while he carved the figure of a small boy from some of the wood, his wife made a little suit of sealskin and, when the doll was finished, she dressed it and set it in the place of honour on the bench opposite the door. From the remaining wood the man carved a set of toy dishes and some tiny weapons, a spear and a knife, tipped with bone. His wife filled the dishes with food and water and set them before the doll.

Before going to bed, the couple sat and gazed at the doll. Although it was no more than six inches high, it was very lifelike, with eyes made from tiny chips of ivory.

'I cannot think why we have gone to all this trouble,' said the man gloomily. 'We are no better off than before.'

'Perhaps not,' replied his wife, 'but at least it will give us some amusement and something to talk about.'

During the night the woman awoke suddenly. Close at hand she heard several low whistles. She shook her husband and said, 'Did you hear that? It was the doll!'

They jumped up and, by the glow of their hastily lit lamp, they saw that the doll had eaten the food and drunk the water. They saw it breathe and its eyes move. The woman picked it up in her arms and hugged it.

They played with the doll for some time until it grew sleepy. Then they carefully returned it to the bench and went back to bed, delighted with their new toy.

In the morning, however, when they awoke, the doll had gone. Rushing outside, they saw its footprints leading away through the village. They followed as fast as they could, but at the edge of the village the tracks stopped and there was no trace of the doll. Sadly the couple returned home.

Although they did not know it, the doll was travelling along the path of light which the man had taken the day before. On and on he went until he came to the eastern edge of day where the sky comes down to meet the earth and walls in the light.

Looking up, the doll saw a hole in the sky wall, covered over with a piece of skin. The cover was bulging inwards, as if there was some powerful force on the other side. The doll was curious and, drawing his knife, he slashed the cords holding the cover in place and pulled it aside.

At once a great wind rushed in, carrying birds and animals with it. The doll peered through the hole and saw the Sky Land on the other side, looking just like earth, with mountains, trees and rivers.

When he felt that the wind had blown long enough, the doll drew the skin cover back over the hole, saying sternly, 'Wind, sometimes blow hard, sometimes soft, and sometimes not at all.' Then he went on his way.

When he came to the south, he saw another piece of skin covering an opening in the sky wall and bulging as before. Again the doll drew his knife and this time a warmer wind blew in, bringing more animals, trees and bushes. After a time the doll closed up the opening with the same words as before and passed on towards the west.

There he found yet another opening like the others, but this time, as soon as the cords were cut, the wind blew in a heavy rainstorm with waves and spray from the great ocean on the other side. The doll hastened to cover up the hole and instructed this wind as he had one the others.

When he came to the north, the cold was so intense that he hesitated for some time before he dared to open the hole in the sky there. When he finally did so, a fierce blast whistled in, with great masses of snow and ice, so that the doll was at once frozen to the marrow and he closed that opening very quickly indeed.

Admonishing the wind as before, the doll now turned his steps inwards, away from the sky wall and travelled on until he came to the very centre of the earth's plain. There he saw the sky arching overhead like a huge tent, supported on a framework of tall slender poles. Satisfied that he had now travelled the whole world over, the doll decided to return to the village from which he started.

His foster-parents greeted him with great joy, for they feared that he had gone forever. The doll told them and all the people of the village about his travels and how he had let the winds into the world. Everyone was pleased for with the wind came good hunting. The winds brought the birds of the air and the land animals, and they stirred up the sea currents so that seals and walrus could be found all along the coast.

Because he had brought good fortune as the Moon Spirit had predicted, the doll was honoured in special festivals afterwards. Shamans made dolls like him to help them in their magic and parents also made dolls for their children, knowing that they bring happiness to those who care for them.