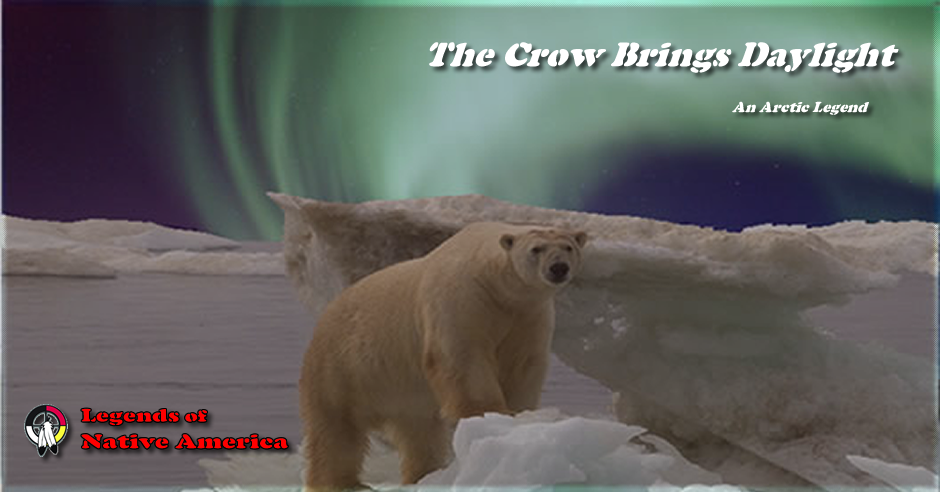 A long time ago when the world was first born, it was always dark in the north where the Inuit people lived. They thought it was dark all over the world until an old crow told the them about daylight and how he had seen it on his long journeys. The more they heard about daylight, the more the people wanted it.

"We could hunt further and for longer," they said. "We could see the polar bears coming and run before they attack us." The people begged the crow to go and bring them daylight, but he didn't want to. "It's a long way and I'm too old to fly that far," he said. But the people begged until he finally agreed to go.

He flapped his wings and launched into the dark sky, towards the east. He flew for a long time until his wings were tired. He was about to turn back when he saw the dim glow of daylight in the distance. "At last, there is daylight," said the tired crow. As he flew towards the dim light it became brighter and brighter until the whole sky was bright and he could see for miles. The exhausted bird landed in a tree near a village, wanting to rest. It was very cold.

A daughter of the chief came to the nearby river. As she dipped her bucket in the icy water, Crow turned himself into a speck of dust and drifted down onto her fur cloak. When she walked back to her father's snow lodge, she carried him with her. Inside the snow lodge it was warm and bright. The girl took off her cloak and the speck of dust drifted towards the chief's grandson, who was playing on the lodge floor. It floated into the child's ear and he started to cry.

"What's wrong? Why are you crying?" asked the chief, who was sitting at the fire. "Tell him you want to play with a ball of daylight," whispered the dust. The chief wanted his favorite grandson to be happy, and told his daughter to fetch the box of daylight balls. When she opened it for him, he took out a small ball wrapped a string around it and gave it to his grandson. The speck of dust scratched the child's ear again, making him cry.

"What's wrong, child?" asked the chief. "Tell him you want to play outside" whispered Crow. The child did so, and the chief and his daughter took him out into the snow. As soon as they left the snow lodge, the speck of dust turned back into Crow again. He put out his claws, grasped the string on the ball of daylight and flew into the sky, heading west. Finally he reached the land of the Inuit again and when he let go of the string, the ball dropped to the ground and shattered into tiny pieces. Light went into every home and the darkness left the sky.

All the people came from their houses. "We can see for miles! Look how blue the sky is, and the mountains in the distance! We couldn't see them before." They thanked Crow for bringing daylight to their land. He shook his beak. "I could only carry one small ball of daylight, and it'll need to gain its strength from time to time. So you'll only have daylight for half the year." The people said "But we're happy to have daylight for half the year! Before you brought the ball to us it was dark all the time!"

And so that is why, in the land of the Inuit in the far north, it is dark for one half of the year and light the other. The people never forgot it was Crow who brought them the gift of daylight and they take care never to hurt him - in case he decides to take it back.