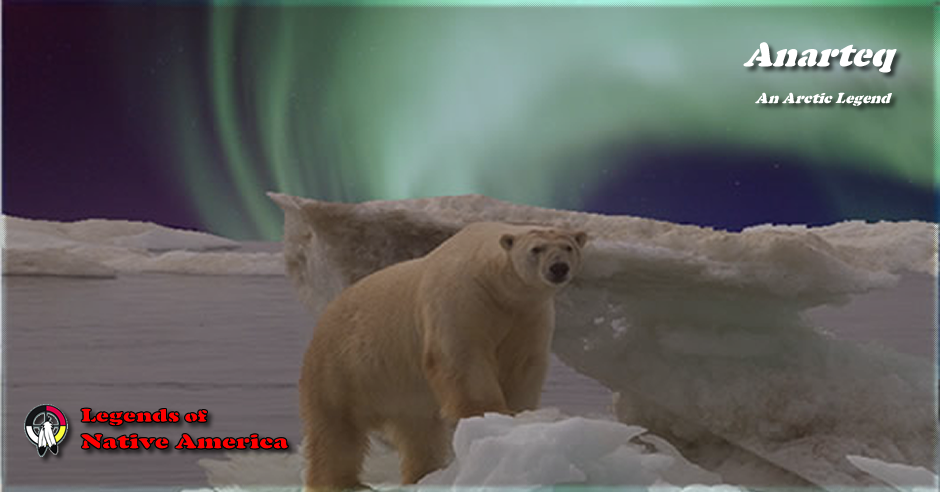 There was once an old man, and he had only one son, and that son was called Anarteq. But he had many daughters. They were very fond of going out reindeer hunting to the eastward of their own place, in a fjord. And when they came right into the base of the fjord, Anarteq would let his sisters go up the hillside to drive the reindeer, and when they drove them so, those beasts came out into a big lake, where Anarteq could row out in his kayak and kill them all.

Thus in a few days they had their umiak filled with meat, and could go home again.

One day when they were out reindeer hunting, as was their custom, and the reindeer had swum out, and Anarteq was striking them down, he saw a calf, and he caught hold of it by the tail and began to play with it. But suddenly the reindeer heaved up its body above the surface of the water, and kicked at the kayak so that it turned over. He tried to get up, but could not, because the kayak was full of water. And at last he crawled out of it.

The women looked at him from the shore, but they could not get out to help him, and at last they heard him say:

"Now the salmon are beginning to eat my belly."

And very slowly he went to the bottom.

Now when Anarteq woke again to his senses, he had become a salmon.

But his father was obliged to go back alone, and from that time, having no son, he must go out hunting as if he had been a young man. And he never again rowed up to those reindeer grounds where they had hunted before. And now that Anarteq had thus become a salmon, he went with the others, in the spring, when the rivers break up, out into the sea to grow fat.

But his father, greatly wishing to go once more to their old hunting grounds, went there again as chief of a party, after many years had passed. His daughters rowed for him. And when they came in near to the base of the fjord, he thought of his son, and began to weep. But his son, coming up from the sea with the other salmon, saw the umiak, and his father in it, weeping. Then he swam to it, and caught hold of the paddle with which his father steered. His father was greatly frightened at this, and drew his paddle out of the water, and said:

"Anarteq had nearly pulled the paddle from my hand that time."

And for a long while he did not venture to put his paddle in the water again. When he did so at last, he saw that all his daughters were weeping. And a second time Anarteq swam quickly up to the umiak. Again the father tried to draw in his paddle when the son took hold of it, but this time he could not move it. But then at last he drew it quite slowly to the surface, in such a way that he drew his son up with it.

And then Anarteq became a man again, and hunted for many years to feed his kin.