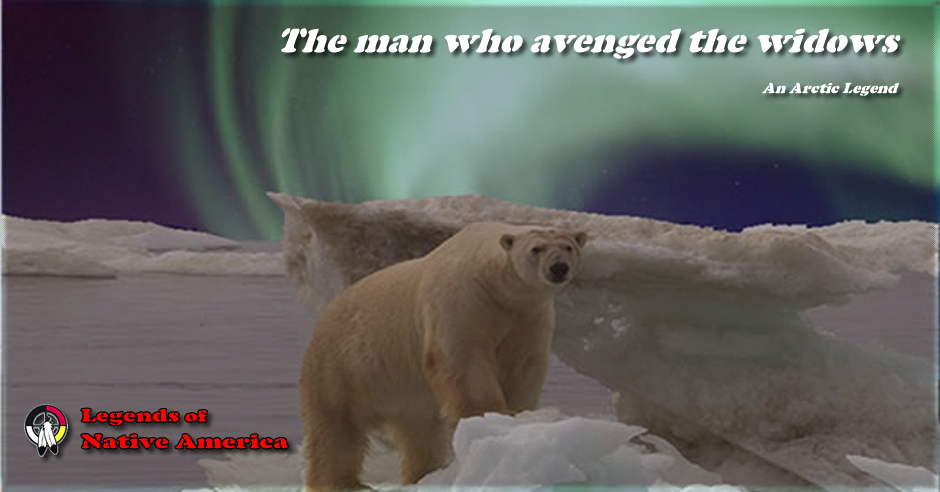 THIS was in the old days, in those times when men were yet skilful rowers in kayaks. You know that there once came a great sickness which carried off all the older men, and the young men who were left alive did not know how to build kayaks, and thus it came about that the manner of hunting in kayaks was long forgotten.

But our forefathers were so skilful, that they would cross seas which we no longer dare to venture over. The weather also was in those times less violent than now; the winds came less suddenly, and it is said that the sea was never so rough.

In those times, there lived a man at Kangârssuk whose name was Angusinãnguaq, and he had a very beautiful wife, wherefore all men envied him. And one day, when they were setting out to hunt eider duck on the islands, the other men took counsel, and agreed to leave Angusinãnguaq behind on a little lonely island there.

And so they sailed out to those islands, which lie far out at sea, and there they caught eider duck in snares, and gathered eggs, and were soon ready to turn homeward again. Then they pushed out from the land, without waiting for Angusinãnguaq, who was up looking to his snares, and they took his kayak in tow, that he might never more be able to leave that island.

And now they hastened over towards the mainland. And the way was long.

But when they came in sight of the tents, they saw a man going from one tent to another, visiting the women whom they left behind at that place. They rowed faster, and came nearer. All the men of that place had gone out together for that hunting, and they could not guess who it might be that was now visiting among the tents.

Then an old man who was steering the boat shaded his eyes with his hand and looked over towards land.

"The man is Angusinãnguaq," he said.

And now it was revealed that Angusinãnguaq was a great wizard.

When the umiaks had left, and he could not find his kayak, he had wound his body about with strips of hide, bending it into a curve, and then, as is the way of wizards, gathered magic power wherewith to move through the air. And thus he had come back to that place, long before those who had sought his death.

And from that day onwards, none ever planned again to take his wife. And it was well for them that they left him in peace.

For at that time, people were many, and there were people in all the lands round about. Out on the islands also there were people, and these were a fierce folk whom none might come near. Moreover when a kayak from the mainland came near their village, they would call down a fog upon him, so that he could not see, and in this manner cause him to perish.

But now one day Angusinãnguaq planned to avenge his fellow-villagers. He rowed out to those unapproachable ones, and took them by surprise, being a great wizard, and killed many of the men, and cut off their heads and piled them up on the side bench. And having completed his revenge, he rowed away.

There was great joy among the widows of all those dead hunters when they learned that Angusinãnguaq had avenged their husbands. And they went into his hut one by one and thanked him.